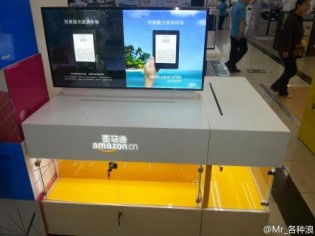 New Kindle displays are being installed in Suning retail locations.

China has been patiently waiting for new devices from Amazon, but the approval process from the government has been a long-time coming. An image from the website of MIIT, the ministry which much approve all devices capable of Web access, suggests that Amazon will be launching several new devices including the Paperwhite e-ink readers and Fire tablets.

Sina Tech reports that these should be launched in early June and will be on sale both on and offline at several outlets, including Suning retail stores and its online stie. Several photos have been taken of Amazon Fire displays being installed, so while still a rumor, it appears to be a credible one.

Via: Sina Tech, Tech in Asia