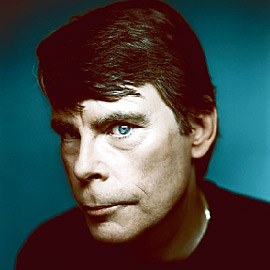 He was one of the first bold faced-name authors to embrace the possibilities of digital publishing, releasing his Riding the Bullet in the year 2000 as an ebook exclusive, then available for computers and PDAs like the Palm V. He offered an exclusive story to Amazon to bolster the launch of the first Kindle. But that was then. Stephen King’s newest book, Joyland, will, at least for now, be released only in a print edition: on June 4th in the US, June 7 in the UK.

“I have no plans for a digital version,” he told the Wall Street Journal. “Maybe at some point, but in the meantime, let people stir their sticks and go to an actual bookstore rather than a digital one.”

Slashgear.com writes that while the motivation behind King’s decision remains uncertain, “it’s believed to be more about supporting physical bookstores than antipathy around digital publishing, or, indeed, trying to encourage readers to get some exercise. However, the book itself is perhaps more suited in overall tone to real paper.”

And that may be the biggest reason of all. Joyland, which is set in a small-town North Carolina amusement park in 1973, and tells the story of the summer in which college student Devin Jones comes to work as a carny and confronts the legacy of a vicious murder, the fate of a dying child, and the ways both will change his life forever. It is being published not by one of the “Big Five” publishers, by Hard Case Crime, an independent US firm whose books feature classically old-school, lurid pulp-fiction style cover art. The publishing house, which specializes in reprints of classic crime novels by such authors as James Cain, Donald Westlake, and Cornell Woolrich as well as “newcomers we predict will be the next generation of hardboiled sellers,” has also printed a previous King novel, 2005’s The Colorado Kid.

“Part of the reason he publishes with us is to support our authors, but I also think he enjoys the pulp presentation,” Charles Ardai, owner of Hard Case, told the WSJ.

“I love crime, I love mysteries, and I love ghosts,” King said in a statement. “That combo made Hard Case Crime the perfect venue for this book, which is one of my favorites. I also loved the paperbacks I grew up with as a kid, and for that reason, we’re going to hold off on e-publishing this one for the time being. Joyland will be coming out in paperback, and folks who want to read it will have to buy the actual book.”