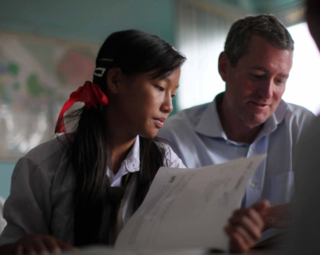 NGO Room to Read has published 850 titles in Lao, Hindi, Tamil, Kiswahili, and 25 other languages.

You’ve probably heard of John Wood, the former Microsoft executive who quit his job to change the world. The NGO he founded in 1999 — Room to Read — has reached out to 7.5 million children and built 15,000 libraries and 1,600 schools.

What you probably haven’t heard is that Room to Read is also a huge publisher. In the almost 10 years since the NGO entered the publishing game, it has published more than 850 titles. That figure will hit 1,000 by the end of this year. So, why haven’t you heard of it? Because most of those books are published in overlooked languages — Lao, Hindi, Tamil, Afrikaans, SeSotho, Kiswahili, Chinayanja and 20 others.

Room to Read’s mission was straightforward from the outset — literacy is the cornerstone of learning and getting an education is the best way to escape from poverty. By providing children with books they are offering the chance of a better life, but they quickly realised that one of the without books in the children’s mother tongue it was sometimes hard to get them enthusiastic about reading. This itself is part of the poverty trap. “Their parents can’t afford books so the publishers don’t publish books in those languages and so the kids are destined to grow up illiterate which to me just seems like a humungous lost opportunity when you think about the tens of millions of kids who will never see a book in the language they speak,” says Wood.

Wood isn’t the sort of guy who likes to sit around dwelling on problems. He instills a solution-focused mindset in his team, something he calls GSD — “get shit done.”

Then it was over to his Nepal country director who discovered a group called the Nepali Society for Children’s Literature. “We don’t know what they’d been doing for all those years because they hadn’t produced any children’s literature, but it turned out that nobody had ever reached out to them and said we’ll pay you to read, illustrate and edit books. And so we put the word out to them that we were going to publish 10 titles.”

Within a month they had 67 manuscripts to choose from and they put together an advisory committee to work out what they wanted and how to vet the books. Because so many children finished Grades One, Two and Three without being able to read, they focused on Early Readers.

Given that Room to Read operates globally, a simple solution to the problem might have been to license content from Western publishers and then with the images and story line in place all they would need to do was overlay the content in Khmer, Vietnamese or whatever script was needed. But Wood knew that there was more to it than that. If the books were to work — to make kids read and want to keep on reading — they had to be culturally relevant.

“…we’ve said we’re not going to do it for the local people, we’ll do it with them.”

“If kids in Zambia are reading a book about a white Christmas and caroling and snowflakes and eggnog and sitting around the fireplace, it’s not going to make sense to them. What they need is to see kids that look like them, see a teacher who looks like theirs — a black Zambian. It was harder to do it that way, but we thought it was the right way to do it,” says Wood.

In 2011 UNESCO awarded Room to Read the Confucius Prize for Literacy, recognizing its success in producing and distributing high quality, culturally relevant books for young readers in Asia and Africa. What made Wood especially proud of the award was not just it recognised the scale of their publishing operation, but that they appreciated how they were working with the local people.

“A really important thing about what we’ve done is that we’ve said we’re not going to do it for the local people, we’ll do it with them. We’re not going to be the sole investor, we’ll be the co-investor,” he says.

To that end, every country director — and Room to Read operates in 10 countries — hires a local language publishing program officer who oversees the publishing operation and forms an advisory committee, a group that might include academics, someone from the Ministry of Education, experts in the language and local authors. The critical factor is that it’s an all-local team and they make the decisions.

Earlier this month, on the North American leg of the tour to launch his second book, Creating Room to Read, Wood met a Canadian publisher in Toronto. Stunned to hear the scale of their publishing, she said: “We published 15 titles and we’re in Canada and you’ve published 850 and you’re a charity!”

Wood was pleased by the reaction, but quick to pull her up on the C-word. “We don’t think of ourselves as a charity. We’re an educational organization, we’re not driven by profit, we’re driven by just doing the right thing for kids around the world.”

DISCUSS: Yes, Even the Smallest Publisher Can Change the World