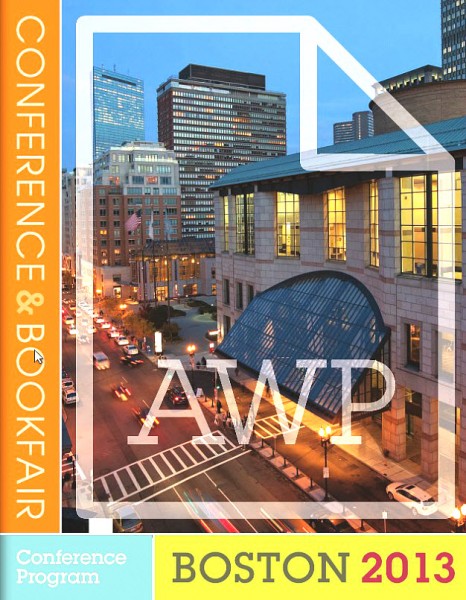 Saturday, Day 3 of AWP, and I’m out front of the Hynes Convention Center having a cigarette break with Publishing Perspectives contributor Nico Vreeland when we hear the blaring sirens of a pair of fire trucks pulling out of the station down the block on Boylston. As they nose out into the street, approaching drivers all stop their vehicles. You know, like you do. Except there’s this one crazy-ass cabbie who swerves around the screaming trucks—cutting them — the fire trucks! — off, and continues speeding along Boylston toward us. “What the hell is that cab thinking?” Nico says. Before I can muster an answer, the car pulls into the Hynes driveway.

A dozen lame responses pop to mind about writing emergencies (“Step on it! We heard Junot Diaz was spotted in Ballroom A.”), but as is often the case, the best response is none at all. Because really, the weirdness and absurdity of a cab cutting off a pair of fire trucks to get his/her fare to a writers’ conference should be allowed to speak for itself.

Friday night, after I had already filed my Day 2 post, a friend of mine who spent all day in the book fair took a seat at the bar, gave a deep sigh, and as her shoulders sagged she said, to the five of us circled around her, “I feel like my soul is dead.” Two of us laughed, four of us nodded in downcast agreement. (I did both.)

But yesterday I wrote that the real weird-bomb actually explodes on Day 3…and so far it’s been more like a few sporadic weird-grenades. Like a guy walking down my row at the book fair wearing what looked like a Burger King paper crown for no apparent reason. Or the woman in front of me on the crowded escalator saying to what I hope was a close friend, “He’s sterile, so we’re getting a divorce.” Or the following conversation, which I overheard at what a friend called the “regular book fair” (i.e., the two ballrooms on the main floor, rather than the forgotten room upstairs where I was nestled in at Z-29):

“He’s hit his ceiling as a writer.”

An Austin friend this morning stopped by to say that he was gearing up to cruise all three rooms of the book fair to spend all of his cash. “I’m quitting my job in a week,” he told me, “so I figured why not blow the rest of my money on books. At least I’ll have something to read [while unemployed].”

So there are at least some people buying books here. Most others, though, are waiting until mid-afternoon today, the traditional point at which many magazines and presses start selling for pennies, or giving away completely, their books and journals so that they don’t have to cart them, or ship them, back home. This Day 3 giveaway is fairly common knowledge among AWPers, which creates an odd dynamic.

See, the people who run these magazines and presses are writers themselves. Many are also students. Writers and students, in general, don’t have a ton of money to throw around. But they do like books. And they do like to support the other litmags and presses by buying their products. But! They usually don’t sell enough of their own products to make the money necessary to do so.

So they want people to buy their books, and they want to buy the other people’s books, which in a way would balance out, since money would just be going from one writer/magazine to another and back.

But instead, everyone just waits until the final day and snags free books and gives away their own books. So everyone goes home with a bunch of new books, but nobody makes any money. (Including those many hundreds who come to the conference with the sole purpose of selling their books to publishers.)

And because I’ve gotta go snatch up my free books before they’re gone, and before I’m flushed, finally, with 10,999 other dead-to-the-world writers and non-writers and dentists, back out onto the Boston streets, where we’ll wander from bar to bar, physically and emotionally exhausted, carting around books and magazines and business cards and our dead souls, firmly entrenched in the knowledge, the absolute without-a-doubt certainty, that this is our last AWP, that we’ll never return to this event, ever, that AWP 2014 in Seattle can go f*** itself, and so can the probably 12,000+ hosers who will show up to do it all again for little-to-no personal or financial or professional enrichment whatsoever.

And we’ll all return to our homes and sleep this conference off for a full week. And after that, if we come out the other side the same person we were going in, we might actually sit down to do some &*^(#% writing.

But before we do that, we’ll turn the computer on, real quick-like, just to catch up on emails and Twitter and our favorite blogs, and then maybe, oh what the hell, take a quick peek at Orbitz or Hotwire or whatever the hell it is we use to overpay for airline tickets, and we’ll check prices for February 26 to March 2, 2014, to Seattle and back. Just in case.

David Duhr is Books Editor at the Texas Observer and runs WriteByNight, a writing center in Austin, Texas. Catch him on Twitter at @write_by_night.