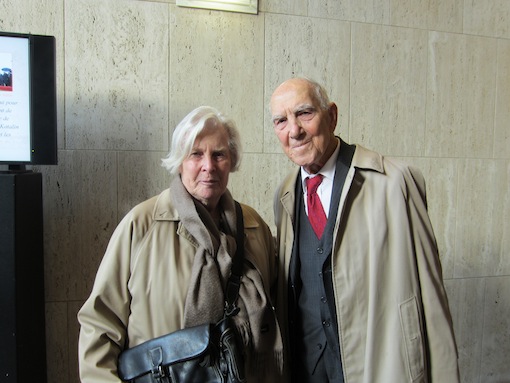 Hessel (on right) and his wife when the Palestinian flag was raised at UNESCO in 2011.

Stéphane Hessel, a philosopher, writer, human rights activist, environmentalist, ambassador and the last living person who had participated in drafting the United Nations Declaration of Human Rights, died Tuesday night in Paris at the age of 95.

An outpouring of tributes to Hessel came from all corners of the world, testament to the great humanity, elegance, humor and energy he had preserved to the end.

Born in Berlin to a wealthy Jewish father and a Protestant mother, Hessel moved to Paris when he was 8 years old. During the Second World War he was drafted into the French army from which he managed to escape to then join General de Gaulle in London. As a resistance fighter, he was captured and tortured by the Gestapo and was sent to the Buchenwald and Dora concentration camps. After exchanging his identity with a prisoner who had died, he escaped while being transferred to another camp and joined US troops in Hanover.

After the war Hessel joined the French diplomatic corps and worked at the United Nations, where at age 31 he contributed to the drafting of the UN Declaration of Human Rights. His experience during the war was the catalyst for his indefatigable efforts to promote human rights and the culture of peace. Most recently he had been a tireless supporter of the Palestinian cause and was scheduled to appear in Brussels next month at the final session of the Russell Tribunal on Palestine, an International People’s Tribunal created by a large group of citizens involved in the promotion of peace and justice in the Middle East.

Hessel also enjoyed a late career as a successful writer. Although he had published several books including autobiographies, his 2010 pamphlet Indignez Vous! (or Time for Outrage in English) in which he urged young people to defend the values of modern democracy, became a veritable sensation, translated into 34 languages and selling 4.5 million copies around the world.

Literature and writing had been a common thread throughout his life, beginning with his parents — his father was an essayist and translator, and his mother was the character who inspired Henri-Pierre Roché’s novel, Jules et Jim, which became Truffaut’s famous film. Many of his close friends were writers and he would happily recite poetry or Shakespeare sonnets whenever he had a chance.

Hessel was recently interviewed on French television where he said he was absolutely unafraid of dying. “Death is a great project, of all experiences it is perhaps the most interesting of all. We shall see what remains and what will be. Life has been beautiful, with awful moments and admirable ones. Death shall perhaps be even more beautiful, who knows!”

And one of his favorite sonnets…

No longer mourn for me when I am dead
Then you shall hear the surly sullen bell
Give warning to the world that I am fled
From this vile world, with vilest worms to dwell:
Nay, if you read this line, remember not
The hand that writ it; for I love you so
That I in your sweet thoughts would be forgot
If thinking on me then should make you woe.
O, if, I say, you look upon this verse
When I perhaps compounded am with clay,
Do not so much as my poor name rehearse.
But let your love even with my life decay,
Lest the wise world should look into your moan
And mock you with me after I am gone.

WATCH: A 2011 short video with Hessel in which he recites the aforementioned sonnet at Paris’ Shakespeare & Co. (in English)