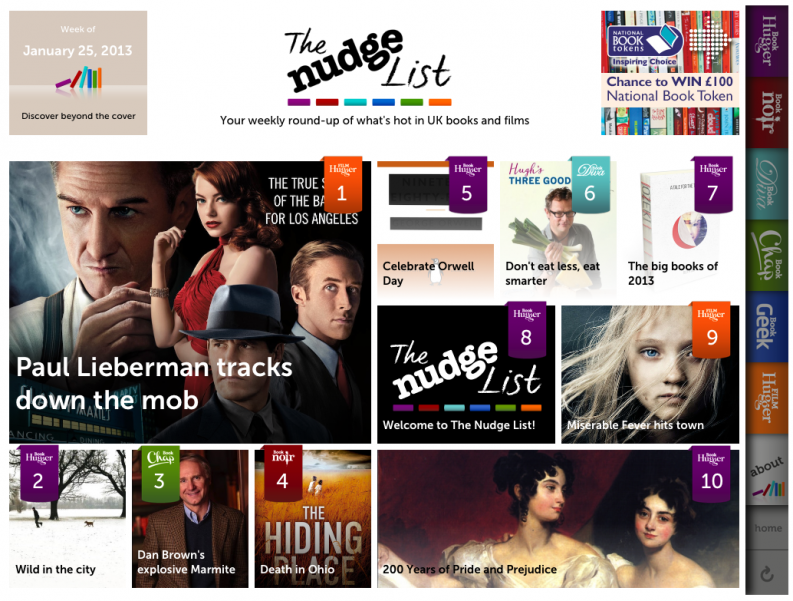 Are you fed with up with the overwhelming choice offered by Amazon, or — as in my case — suspicious of their scarily accurate personalized emails, but just too lazy to go to your local book store (if you still have one)? Then there is a new app in Apple’s App Store that might be for you, and if there is one term that describes The Nudge List, it is that buzzword of a thousand workshops: discoverability. Although, as it is updated only once a week, there may to a limit to how much you can discover.

“72% of site visitors bought a book directly as a result of reading content on the site.”

Download it on to your iPad, touch the quirkily large lower-case “n” and it’s hard not to be immediately seduced by the simple and colorful space you enter that is in marked contrast to other sites, such as Goodreads. Pictures of the top ten hottest stories in UK books and films as chosen by four or five experienced and independent journalists (and not a computer) tempt you to press again and, in theory, to read an extract from a middlebrow book, watch a video of the writer talking (a feature that even my cynical wife described as cool), and perhaps buy a book to download only on to iBooks. There is, of course, the ever present “share” icon as well, although only by email, Twitter or Facebook.

Perusing the app earlier this month, one finds it is dominated by pictures of a rather rough and worried looking Tom Hanks with a white slogan “No man is an island underneath.” Touch it and you are taken to a blurb about the movie Cloud Atlas, although oddly there is only one mention of the book, which you can buy below for £5.99 (the same price as Amazon). Curiously, though, the video is a trailer for the film and not something more book-related. There isn’t an option to read an extract of the book either on that page.

But there are plenty of options: on the right-hand side of the screen there are six tabs that take you through to channels such as the tongue-in-cheek or stereotypically (depending on who you talk to) named Book Chap and Book Diva, which lead you to further curated ranges of books.

The two men behind the app, Alastair Giles and Simon Appleby, believe that with this app, which is also designed to drive traffic to their site nudgemenow.com, they are very much on to something.

Giles and Appleby are founders and joint MDs of AMS Digital Publishing, a company set up in 2012 set up to promote The Nudge site.

As Giles says: “There is nothing else out that gives you curation in such a very visual form, and discoverability is not something that Amazon is any good at.” Appleby goes further to say that “there was a gap in the market for an independent app that offered tailored discoverability.” Although publishers can suggest titles for inclusion, and there are links back to publishers own websites for data collection.

And despite early teething problems with the download speed that led to some negative App store reviews, the app was downloaded 7,000 times in the first seven days so they may well be right. According to Giles, an online survey of early users came back with the statistic that “72% of site visitors bought a book directly as a result of reading content on the site.”

Nonetheless, these two industry veterans admit that with “a tiny budget” and relying on “good connections,” they are “not going to be troubling Amazon soon.”

The link with films does, in Giles’s view, give it another USP, as they believe that “book readers who love films perhaps haven’t been served very well in the past, and it is an audience that film companies are desperate to reach, as 30–40% of movies are based on novels.” Appleby believes this offers a new angle on the age-old debate as to “what is more powerful — book or film?”

To him, Apple’s iOS rather than Android seemed the “obvious first platform for our ‘visual’ approach. Plus, frankly, at the moment, it offered the best penetration and gave Apple the chance to promote iBooks, too.

“We also wanted an app where we could send updates that the user could interact with (at least partially) offline, so we were not creating a ‘web app.’

“While we’re not the first people to use WordPress to deliver content an iOS app, it is a still a little-used technique so there was a learning curve here. The other key appeal is that the content creator only needs fairly conventional CMS know-how to publish a new issue.”

Although biggest challenge for Alastair Giles in launching the app was “going round explaining the app to publishers who are spending a lot of time and money on creating their own websites, twenty years too late.”

For Vicky Palmer, Head of Digital Marketing at Headline Publishing Group, founders Giles and Appleby may well be on to something, as apps like the Nudge List do offer publishers “a great opportunity to share and promote our digital content.” Palmer is “supporting the new Nudge Platform across all formats.”

In particular, she feels, what is really exciting about the app is “the chance to reach new audiences via channels that they’re already familiar with, but with content that is probably new to them.”

It’s also breaking new ground with book audiences as well, “so we’re looking forward to seeing how readers interact as well as who’s using the app, and over time we’ll look to tailor our content to best meet their requirements.”

Cate Cannon, Head of Marketing & Digital Content at Canongate Books, agrees with Palmer that there is a “huge value” to publishers in “curated, intelligent spaces online” like The Nudge List.

“They can only be positive things for books in the download era,” she believes. “Recommendation remains one of the most powerful instigators to buy, and any community that builds an audience and increases valued content and word-of-mouth can only help the discoverability of books online.”

“If The Nudge List knows its target audience well, and earns a reputation for consistently introducing them to authors that really satisfy, it will have an important role to play in guiding readers through the sea of digital content they currently face and one that we’ll be delighted to support.”

Nonetheless, she adds, “it’s great to see a new UK channel for discovering both books and experiences around authors and the writing process that can’t be adequately discovered through algorithmic recommendations alone.”

In terms of their future plans, Giles simply says that they have a target of 50,000 downloads in six months and beyond that it is a case of “watch this space,” with an app for Android on the cards if demand holds up, as well as the use of more back-catalogue titles.

Appleby goes further, explaining that they have plans to “partner with many other independent book- and film-focused organizations to grow awareness of the app as a way to reach their audience in an interesting way. We’re not going to be protective over our data with them.”

But maybe they should be careful when my Kindle-loving wife clicked “Buy” for a book on the app and saw the phrase “only to iBooks” after which she switched to her Kindle app on the iPad.

DISCUSS: Is “Book Discoverability” a Bubble Ready to Pop?