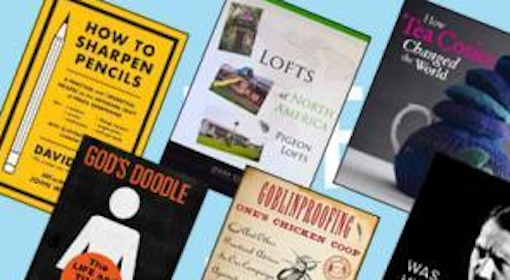 Six titles have made the shortlist for the Diagram Prize for Oddest Book Title of the Year.

Philip Stone, the Diagram Prize’s coordinator said: “People might think this prize is just a bit of fun, but I think it draws welcome attention to an undervalued art. Publishers and booksellers know only too well that a title can make all the difference to the sales of a book. A Short History of Tractors in Ukrainian has sold almost a million copies to date, while books such as Salmon Fishing in the Yemen, The Guernsey Literary and Potato Peel Pie Society and The Hundred-Year-Old-Man Who Climbed Out the Window and Disappeared perhaps all owe some of their success to their unusual monikers.”

Horace Bent, The Bookseller’s diarist responsible for the award, told The Telegraph, “It remains a great honor of mine to represent a prize that draws attention to authors not called Hilary Mantel that may need a little help in gaining column inches and subsequently entering public consciousness and bookshop bestseller bays.”

The Diagram Prize was launched at the Frankfurt Book Fair by Diagram Group Founder Bruce Robertson. The first winner was announced in 1978 and was a classic: Proceedings of the Second International Workshop on Nude Mice.

The winner will be chosen by a public vote and announced on March 22nd. The reader who nominated the winning title will receive a “fairly passable” bottle of Claret as his or her reward.