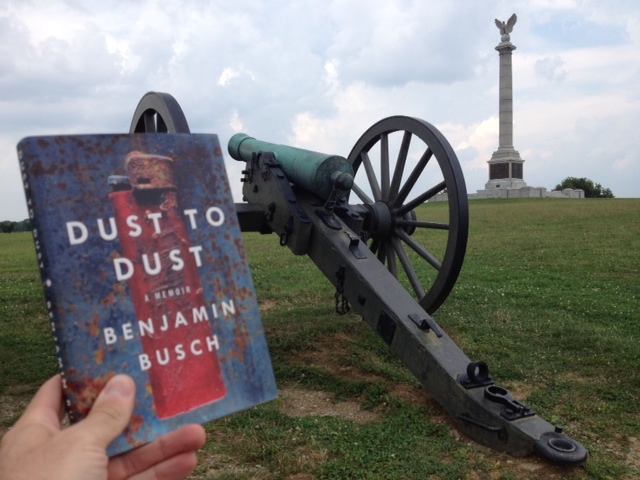 “I was told over and over that most of the stops on my tour were worthless, that they were all flyover country for literacy.”
—Benjamin Busch on his 50 state book tour.

Last March, the writer, filmmaker and Iraq War veteran Benjamin Busch’s memoir Dust to Dust came out to strong reviews. His publisher Ecco flexed its formidable publicity muscles and got Busch some major media attention, including TV spots on “Fox and Friends” and NBC, as well as an interview in the Huffington Post. Busch, however, had other ideas for the book tour. Instead of taking the classic eight-city tour his publisher offered him, Busch asked to use that budget for plane tickets and hotel rooms to undertake a one-year cross-country tour by car, to hit all 50 states and carry out 197 readings at independent bookstores and a few libraries.

“My book is a cross between a memoir and a meditation, and cross-pollinates between several genres,” said Busch, who is the son of the late fiction writer Frederick Busch. “It would be difficult to draw comparisons to other books. I thought it would take time to find a readership. An eight-city book tour would give me two weeks of media attention, unless the book had strange news attached to it, or if it was carried as a flag by some celebrity.”

Dust to Dust was given a respectable printing of 20,000 copies. Busch’s tour idea surprised his publicist. “I was shocked,” said Michael McKenzie, the publicity director of HarperCollins’ Ecco imprint, “but I worked with the bookstores I had relationships with to set up three or four months of dates for Ben. In my 15 years as a publicist, this was the most grassroots campaign for a book I’d ever heard of.”

Thus began the first and most brutal leg of Busch’s campaign, a five-month roadtrip of solitary driving to bookstores around the country, leaving his professor wife and two young daughters at home in Michigan. “I left my home on March 17th,” said Busch in a telephone interview outside Philadelphia, while still on the road. “I started off in my Toyota Corolla, with its 200,000 miles, and did a loop from the Midwest to New York. Then I flew to Bellingham, Washington and drove a rental to Los Angeles, where I got a friend’s Prius, which gets 45 miles to the gallon.”

With magnetic signs advertising the book on the car doors, Busch drove up to Bellingham, Washington, then down to San Diego, turning left and going up the western side of the Rockies, to Idaho, Wyoming and Montana. He hit the Dakotas, then drove down to Texas and New Mexico, then to Louisiana and Florida, and up north through Georgia.

“If I lived in the car and slept on friends’ couches, I knew my expenses would be minimal,” said the 43-year-old Busch. “I’m 6’1” and I’m not saying the Prius is designed for sleeping. I’ve been in combat and I’ve slept in the Iraqi desert for almost two years. Deprivation doesn’t upset me as much as it does others.” Busch had a unique path to becoming a Marine infantry officer. Despite his parents’ pacifistic tendencies, Busch was obsessed with building forts in the upstate New York woods where he grew up. He went to Vassar College, studied art and survived Marine Officer Candidate School. “I am the only Marine officer that Vassar has produced since 1861,” quipped Busch, referring to his formerly all-women alma mater.

Busch served two grim tours in Iraq. In the second tour, he was wounded, receiving a purple heart and bronze star. He has also acted in the acclaimed TV series “The Wire” as a gung-ho cop and has directed two films.

Busch’s nontraditional memoir breaks into chapters titled “Arms,” “Bone” and “Blood.” He covers his childhood in the woods, the sudden death of his father, his training as a Marine and his Iraq tours. He writes, for example, of waiting in Ramadi to take out the body of an Marine Captain friend killed by an IED.

In the 27,000 miles he drove in five months, Busch travelled through surreal scenes, including the beginning of the Colorado forest fires in late June, a lunar eclipse and a hailstorm and flood on the border of New Mexico. “I was in Scottsdale, Arizona, where the weather was 103 degrees,” said Busch. “A week later, I was sleeping in the back of my Prius in Wyoming, under three inches of snow.” In Austin, Texas, he found himself in the office of Governor Rick Perry. “We spoke for 90 minutes and Perry bought three books. That wasn’t on my map.”

What Busch has discovered on his tour are dynamic independent bookstores trying to survive in the age of Amazon. “The industry doesn’t focus on book tours anymore,” said Busch. “They don’t see any value in them other than the news you’re able to gather at the beginning.

“I was told over and over that most of the stops on my tour were worthless, that they were all flyover country for literacy,” said Busch. “This is based on years of publishing companies giving up pieces of territory and sales representatives being drastically cut back. I’d say half the stores I’ve been to haven’t seen a sales rep in years.” Busch was surprised by the resilience of many small stores as they fight to survive and found bibliophiles in unlikely places. “I thought the Dakotas would be barren, but I was wrong,” said Busch. “At Prairie Pages in Pierre, South Dakota, they sold out my book. I sat at a small table. Everyone who came into the store, the staff would walk them over to my table. They handsold the book while I was there.”

The difference was often one dynamic person in the bookstore. “The Alabama Booksmith in Birmingham really fights for their authors and books,” said Busch. “The owner coordinated two events for me, where 250 people showed up. He did all the work.”

Tracking his book through Author Central on Amazon, he noted that the map of sales for Dust to Dust surged temporarily as he moved through different territories.

Survival strategies for independent bookstores vary. “A lot of stores are relying on card sales or coffee, and books may be the third thing they offer,” said Busch. “Shops are getting smaller and moving off Main Street, figuring the readers will find them. Some bookstores have also become nonprofits to survive.”

Along the way, Busch did all press work that was available to him. “I’ve done radio shows out of people’s basements,” said Busch. “I’d drive all night to make sure I hit a morning show. If a town still had a local newspaper, those were wonderful.” After every reading, Busch sent McKenzie, his long suffering publicist, a postcard saying how many people showed up and how many books were sold.

By the end of his arduous tour in late August, Busch had carried out more than 100 readings. He was forced to return home by the beginning of his wife’s school term, where she is a history professor at Ferris State University. Busch has been going off, doing local events in the Midwest and is up to 112 readings given in 45 states. He’ll complete the 48 contiguous states by the end of October with a trip through the northeast, through New York, Vermont and Maine. Before the March 2013 paperback release of Dust to Dust, he’ll fly to Alaska and Hawaii to finish off all the states in the Union.

Even though Busch slept in his Prius many nights and showered at truck stops, the biggest hardship was on his family. “My wife has carried out a tremendous sacrificial act to hold the family together while I run around and try to sell a thoughtful book to America,” he said. “We missed each other terribly.”

Now home for the time being, Busch’s reacclimation to family still continues. “I wish I could replay over and over the image of my daughters running down the driveway to meet me,” he said. “I am going to keep them close for the next four or five months.”

DISCUSS: Like Romney, Does Publishing Dismiss Half of America?