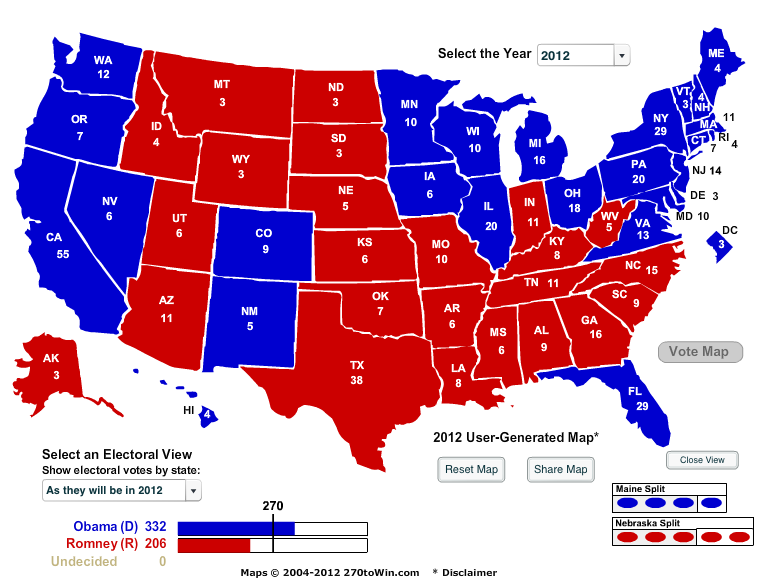 The red state / blue state divide is an awful lot like how publishers see the United States. Looking at the the latest polling map for the American presidential election, you wouldn’t be blamed for mistaking it for a map of a really big book tour. The blue states, which support Obama, are clustered along the two coasts, with the red states, which support Romney, take up the bulk of the middle of the country. Publishers tend to cluster their author tours in a few cities — New York, Boston, Washington D.C. on the East Coast, Chicago in the Midwest, and San Francisco, Seattle, Portland and Los Angeles on the West Coast. Austin and Miami get their fair share of authors. Ignored: everyone else, some 80% of the country.

The coastal bias in publishing is prevalent. Let’s not go into the fact that you are 99% more likely to find a novel set in Brooklyn on store shelves than you are to find one set in, say, Minneapolis. Let’s look at something more quantifiable: bookstores. In our discussion of “national bookselling,” the conversation makes it sound as if there really is just one major bookstore chain in the nation: Barnes & Noble. Of forgotten, or simply ignored in the conversation, is Books-a-Million. That chain, still thriving, is based in Birmingham, Alabama, and currently operates more than 250 stores in 31 states and the District of Columbia. It has just one store in New York state — in Valley Stream — and none in California; it is most dominant in Florida, Alabama and the South, though is also spread across parts of the East Coast and Midwest as well. Yet despite this rather sweeping profile, its influence is rarely acknowledged.

When you look at the talk about independent bookselling, the conversation broadens significantly. Who would argue against the fact that an equal number of powerful independents are located in places like Iowa, North Carolina and Denver, as well as Chicago, Portland, and Seattle. (Manhattan is surprisingly bereft of indies due to the high rents, though Brooklyn has a strong community.)

Indies are cool. Barnes & Noble is a hedge against the creeping power of Amazon. Books-a-Million? Don’t they just sell Bill O’Reilly screeds and Vince Flynn thrillers to Republicans?

In our feature story today, author Benjamin Busch observes that when people spoke to him about his 50 state book store, “I was told over and over that most of the stops on my tour were worthless, that they were all flyover country for literacy.” He disagrees.

It’s a shame that attitudes in publishing hew to such cynicism — the same cynicism we see in our political process, one that has spent millions upon millions of dollars advertising exclusively in swing states like Florida, Ohio and Colorado. The political strategists feel they have it all worked out: spend money influencing only those who can still be persuaded and who matter. The rest: well, the assumption is that they’ve made up their minds and are, for all intents and purposes, lost causes as far as marketing is concerned.

Is this attitude so different from that of publishing, which appears to have given up on huge swaths of the country. Like Romney, have they written off half of Americans? (That would be, if you’re counting, some 150+ million people). Is it a cultural bias? Ignorance? Or simple pragmatism born out of experience?

And even if it is so, is it right?