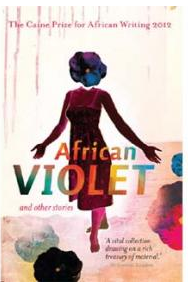 It is the world’s second most populous continent with a population of well over one billion people and a tradition of storytelling that goes back centuries. And yet, with a few notable exceptions such as Nigeria’s Chinua Achebe, Kenya’s Ngiugi Wa Thiong’o, and South Africa’s J.M. Coetzee, much of the extraordinary work being done by authors throughout Africa is largely either unknown or unavailable elsewhere.

Which is why African Violet and Other Stories is such a wonderful find. This new anthology includes the five short stories shortlisted for the 2012 Caine Prize (often called the Booker of Africa — it’s given for the best original short story by an African author), as well as an additional ten stories from The Caine Prize African Writers’ Workshop written by authors from across the continent, it gives readers worldwide a taste of the diversity and talent coming out of Africa today.

“The old jailhouse on the hilltop had remained uninhabited for many decades, through the construction of the town’s first grammar school and the beginning of house-to-house harassment from the affliction called sanitary inspectors, through the laying of the railway tracks by navvies who likewise succeeded in laying pregnancies in the bellies of several lovestruck girls, but fortunes changed for the building with the return of Colour Sergeant Bombay, the veteran who went off with the recruitment officers to Hitler’s War as a man and came back a spotted leopard.”

The story grows ever richer and stranger. Caine Prize judge Bernardine Evaristo described it thusly: “Bombay’s Republic vividly describes the story of a Nigerian soldier fighting in the Burma campaign of World War Two. It is ambitious, darkly humorous and in soaring, scorching prose exposes the exploitative nature of the colonial project and the psychology of Independence.” Or consider Urban Zoning by Kenya’s Billy Kahora, which tells the story of a young drunk Kenyan “The Zone was the calm, breathless place he found himself in after drinking for a minimum of three days straight,” who still manages to outwit his irate employers at the bank. Or the hard-boiled noir of South Africa’s Constance Myburgh, whose Hunter Emmanuel: Case 1: Saws and Whores, which starts of with a proverbial bang:

Hunter Emmanuel shouldered his chainsaw and looked up at the trees.

That, he thought, is some crazy shit.

The leg hung from a branch three-quarters up the pine’s trunk. It was a woman’s leg, he though, though you could never know one hundred percent, and it had been cut right at the crotch, at the dip he liked so much, probably his favourite place in a chick.

Or Melissa Tandiwe Myambo of Zimbabwe’s heartbreaking La Salle de Depart, which looks at the lives of Senegalese siblings, one of whom left for America and the other who remained behind, familial responsibilities, and the chasm that lies between them.  Or,  Stanley Kenani of Malawi’s Love on Trial, which in what can only be seen as an extraordinary act of artistic and political courage, shows the persecution of one gay man bringing disaster to the entire country.

Or , in fact, consider any of the other stories in this fine collection. And then, consider what you’ve been missing.