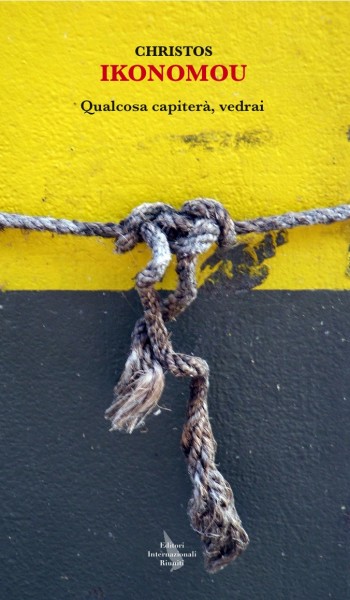 Modern Greek fiction and non-fiction is barely known outside of Greece. Not surprisingly, the recent economic crisis has come to change that. As Europe plunges deeper into recession, so readers all over the world are becoming increasingly interested in the small debt-ridden country at the center of it all.

On the Unhappiness of Being Greek has sold 110,000 in its home country.

Are Greeks as unruly and work-shy as the press portrays them to be? How have the austerity measures, social tension and soaring crime affected everyday people? Thankfully, good books can provide answers that most news channels cannot; more importantly perhaps, they can challenge stereotypes.

Forty-one year-old, Christos Ikonomou, “the Greek Faulkner” according to Italy’s La Repubblica, wrote his collection of short stories, Something Will Happen You’ll See just as the economic crisis was erupting. His heroes and heroines are pensioners, protesters, labourers and the unemployed living in the heart of the western suburbs of the port of Piraeus. The stories he builds around them are heart-wrenching and moving yet devoid of any sentimentality. They are deeply illuminating, not only about working-class Greeks in the face of the crisis, but, more importantly, about the human condition.

“Greece’s crisis has deep and obscure roots. I don’t write about the surface of things, but about what is under that surface,” the author said in a recent interview with La Repubblica. “Ikonomou redefines the value and the archetypal importance of the Greek epic,” wrote Italian magazine Panorama, “…he depicts the difficulty of living in the here and now.” Qualities that have prompted German publisher, C.H. Beck, to make Ikonomou’s book their first Modern Greek fiction acquisition in decades.

Nikos Dimou’s small book of aphorisms about Greece and Greeks, conveniently titled, On the Unhappiness of Being Greek, is a philosophical gem that scratches far beneath the surface of the Greek psyche.

First published in 1975, the book became an overnight bestseller in Greece and is currently in its 31st edition having sold over 110,000 copies. An instant bestseller in Germany (Kunstmann, 2012) where it has gone on to sell more than 18,000 copies in three weeks, the book has also been published in France (Payot, 2012) and Italy (Castelvecchi, 2012). Spanish (Anagrama), Turkish (Istos) and UK editions (Zero Books) are forthcoming.

According to German newspaper, Die Welt, Dimou’s book “is painfully relevant to understanding the current crisis.” The Frankfurter Allgemeine wrote: “Only the Gods know why it took almost forty years for this work to finally appear in Germany.” “A manual of the Euro crisis,” proclaimed HR2 radio. According to its author, Nikos Dimou: “This book is not a humorous collection of aphorisms about the shortcomings of Greeks — but a bitter reflection on their tragic destiny…(it is) the product of a man who cares deeply for his country, and tries to help his fellow citizens fulfil the Delphic motto: ‘Know thyself.’”

Which is precisely what makes cultural exchange through literature so vital and urgent in this time of global crisis: through good books we do not only get to know ourselves better but also those around us.

Some excerpts from On the Unhappiness of Being Greek, translation by David Connolly:

Whenever a Greek talks of “Europe,” he automatically excludes Greece. Whenever a foreigner talks of Europe, it’s unthinkable for us that he should not include Greece.

We are a people without a face. Without identity. Not because we don’t have a face. But because we don’t dare look at ourselves in the mirror. Because we’ve been made to feel ashamed of our real face. So much so that we are afraid to know ourselves. And so we learned to play different roles: that of the “ancient Greek,” that of the “European…”

Excerpt from Christos Ikonomou’s Something Will Happen You’ll See, translation by Kathleen O’Donnell:

It is raining: it stops. After a while it will rain again. She looks out of the window. There in the west, it was all red – the wind, the sky, the clouds. Tonight it will rain blood, says Elli and she shudders. Her glance turns from the window to the heart of the lettuce, which seems to be throbbing in her hands – it is not the heart of the lettuce that is pulsating; it is her hands which are trembling and that which she sees founders in her, like the smile of an unemployed person or someone who has just been fired.