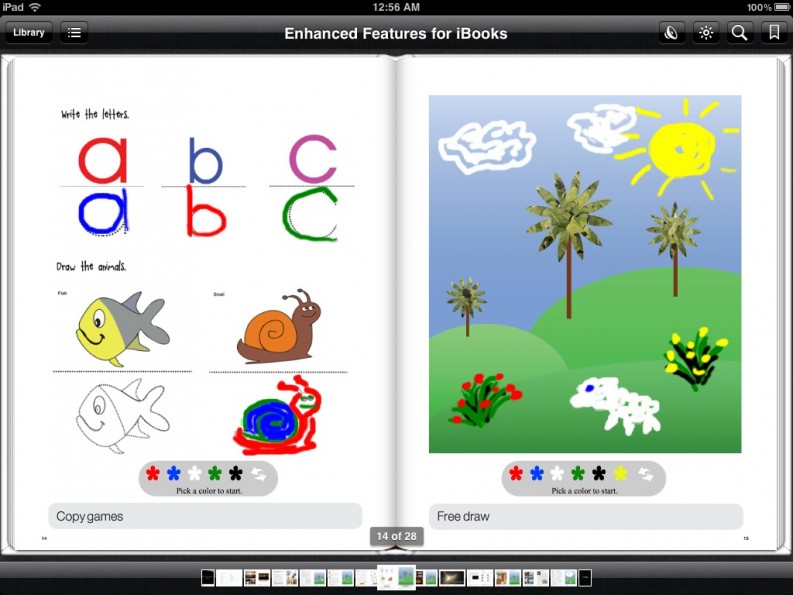 “We spend a lot of time telling people what is possible.”

According to Clynton Hunt, vice president digital books at ZOO Digital Arts, when discussing enhanced e-books with publishers, generally speaking they think you’re talking about just adding a bit of narration, turning it into a read-aloud story. “When you’re talking about enhanced, the general consensus is that it’s voice or a bit of video, when in fact it’s a lot more than that. But it’s all so new that you can, in fact, replicate a lot of the features in an app in the form of an e-book.” ZOO Digital Arts is a company with a long history of digital storytelling, starting with Hollywood films, moving into interactive games and finally diversifying into interactive education solutions, and expanding across multiple digital formats. They have worked with global properties such as Harry Potter and Scooby Doo, Lego and Barbie, developing innovative game concepts that are rich in narrative while at the same time pushing the boundaries of what’s possible in interactive features.

The ZOO Digital Arts team has also developed numerous interactive education solutions ranging from K–12 study aids all the way to educational gaming for companies such as National Geographic and The History Channel. “Through our parent company ZOO Digital Inc., we were at the forefront of fixed layout production, having developed conversion tools that helped bring illustrated and highly visual books to devices such as the iPad and Nook Color. Today, conversion remains a part our business, including licensing of our tools for publishers to use, but enhanced e-books are what really excites us.”

They have applied their characteristic design approach to e-books, where their focus is, always, on the story. “If you speak to a publisher about a new book, or a new author, the focus is not on the format, it’s on the story,” said Hunt. “But when you talk about e-books, the discussion is always about the technology. But it’s still the story, that’s still the beginning and the end. You really have to understand the story, understand the theme, and understand the changing mood as the story progresses. You then design enhanced treatments that are consistent with what’s happening on the pages. Somber or reflective scenes should not offer readers the ability to throw rocks in the pond. But even so, at the end of the day, if we’re not satisfying the reader’s expectations, we’ve failed.” “Our focus is taking an existing story in a print form, and instead of creating an aesthetic digital page-turning experience in an e-book, we say, ‘let’s give the reader something a lot more compelling that will meet their expectations. Kids are familiar with what’s possible in an iPad. They expect that they can touch, they can drag or drop, and it’s exciting for them — they don’t know what’s going to happen. And until very recently, the experience with books from the iPad store is that you can touch but it doesn’t do anything. No drag, no writing, no quizzes or puzzles or word search. But that’s the kind of thing that kids want. So that not only opens up possibilities for storybooks, but it also opens up the opportunities for publishers in workbooks and puzzle books that publishers have assumed can only be done in apps. Showcase titles, enhanced books that enhance the story: it’s still the story, and it’s the experience that kids expect to have.”

For Hunt, it’s a question of finding the balance between enhanced features that complement a story and those that overpower the story and are merely distraction.“The last thing we or publishers want is to turn a book into a game. The story must always remain central to the experience. Our digital editors devote an enormous amount of time to developing features and interactive effects that blend and feel entirely natural to the progression of the story.” And ZOO is adamant that every book should be treated differently. “E-book apps can be very formulaic. The story has to fit within the structure of the e-book app template that has been developed. The e-books all play the same way and offer the same set of features even if the stories themselves are very different. We don’t do that. Just as the original stories don’t follow a pre-defined template, neither does our process as we define enhanced treatments unique to the individual story.”