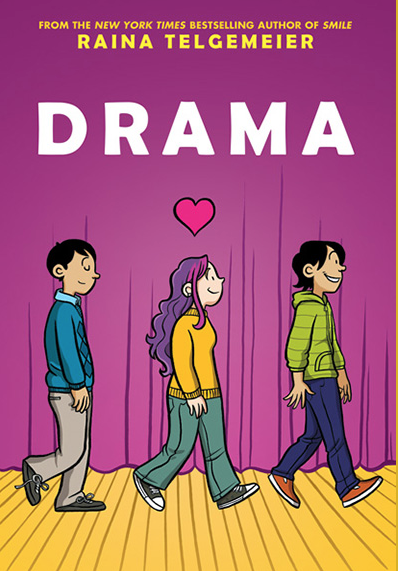 Author Raina Telgemeier will speak on May 31st at PP’s Children’s Publishing Conference about storytelling in graphic novels. More about this conference »

Since her career began with a series of self-published mini-comics called Take-Out and a short story “The Justice League in: Take Your Kids to Work Day” in Bizarro World for DC Comics, Raina Telgemeier has rapidly become a critical and popular success for her graphic novels aimed at a largely female YA audience, helping to expand the genre’s boundaries. She made four adaptations of Ann M. Martin’s The Baby-sitters Club series for Scholastic/Graphix, including Kristy’s Great Idea, which was chosen by YALSA for their 2007 Great Graphic Novels for Teens list, as well as ALA’s Booklist 2007 Top Ten Graphic Novels for Youth list. Her own autobiographical tale Smile won the 2010 Boston Globe-Horn Book Award Honor — the first graphic novel ever chosen —  and the 2011 Eisner Award for Best Publication for Teens. We can only guess what honors await her upcoming Drama, coming in September from Scholastic/Graphix. “For a long time, people have had their own idea of what comics mean, or what graphic novels mean, and I think a lot of people in the world, even kids, automatically think superheroes, or gritty or graphic — it’s right there in the title! What I do is none of the above. I think I’ve created my own little niche and my own readers who read them. I get a lot of people who didn’t know they even liked comics. I like to think I’m pulling down some barriers and stereotypes and if that means I’m bringing in different writers who are able to write from a personal place, I’m great with that.”

While her work has long drawn on her personal life, it wasn’t always targeted at younger audiences. That happened, at least in part, through demands from her readers. “With the mini-comics, I was creating work for myself, looking at my life at the time in my early 20s, so by default my work was aimed at readers going to college and just out of college. But I started mixing in stories of my childhood, and so more of my work was appropriate for kids to read. My style is very cartoony and kid friendly anyway, and parents always wanted to be able to share them with their children. So as I went on, I wanted to be able to say ‘yes’ to all those parents. I did seven issues of mini-comics, and by the sixth I was writing mostly about my childhood. So what they were responding to was, in fact, a natural evolution.” Telgemeier is just turning 35 (an event she finds “unsettling”), and she finds her belief that she still has the mind of a child helps her stay connected with her readers. “I feel like I remember those years of my life very clearly, and when I put the words and pictures on paper audiences agree and people flock to it. The response has been astounding: kids email me to tell me that they are that character, and the fact that they respond so strongly is very gratifying.”

And respond they do, not only by email, but through Telgemeier’s frequent school visits, library visits and Skype chats.  She also gets an opportunity to meet with parents (along with their children) at comic books conventions, where she sees herself as a booster not only of her own work, but that of other graphic novelists as well. “I like to think that I’m opening their eyes to what’s out there. ‘You like my work,’ I often say, ‘why don’t you try this?’”

Telgemeier, along with John Rocco, Peter Martin and Beth Kephart, will be part of the panel discussion “Author, Author!: Building a Career, Connecting with Kids and Standing out from the Crowd,” at this year’s Publishing Perspectives’ Children’s Book Conference being held May 31st in New York City. Given her strong connection with her own readers, and her conviction that “connecting with the readers just means getting the books into their hands,” it should be an interesting conversation.