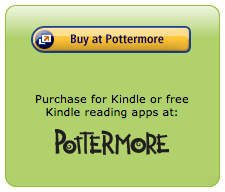 So it looks like waiting to sell your e-books until your fans are in a frenzy to have them was a good strategy for the Harry Potter empire. JK Rowling decided not to grant the digital book rights to her publishers and instead sell the e-book versions through a dedicated Harry Potter website, Pottermore. The e-books went on sale just three days ago, and sales have already broken the £1 million mark, according to Pottermore CEO Charlie Redmayne, who was interviewed by The Bookseller‘s Philip Jones on a radio show called “The Naked Book” yesterday.

Laura Hazard Owen at PaidContent calculated, based on the price of the e-books, that unit sales are upwards of 164,000. Not bad for three days.

Amazon and Barnes & Noble are also “selling” Harry Potter e-books in so far as the books are listed on their websites, but the buy links take customers back to Pottermore. It’s interesting that Amazon, usually the playground bully, has agreed to hand over customers and sales to a third-party website. Doubful that any other authors have that kind of clout with Amazon. Given the amount of direct and search engine traffic that Amazon and Barnes & Noble receive, this looks like a win-win situation for Rowling and Pottermore.