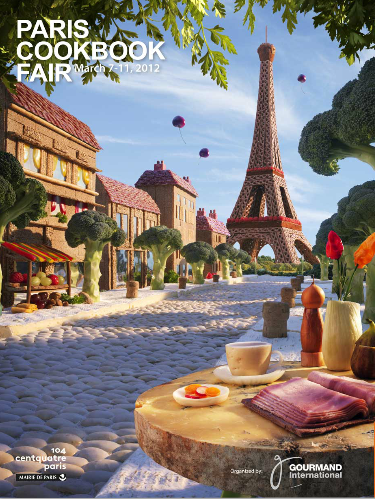 Seventy chef demonstrations, 36 wine, beer and spirit tastings and lots of trade talk are on the menu at third Paris Cookbook Fair.

The economic downturn in many western countries, which means people are eating out less, coupled with the dominance of TV cookery shows, has created a fertile environment for cookbook publishers, says Edouard Cointreau, founder of the Paris Cookbook Fair which is about to “set the tables” on 7-11 March at Le 104, the city’s cultural centre. Explaining the fair’s growth, Cointreau, who is part of the famous Cointreau liqueur dynasty, said: “We are responding to a need. In publishing, cookery is one of the few sectors that is growing. People are going back to cooking at home because, in tough times, they cannot afford to eat out. Also, you have a generation that hasn’t learned to cook from their parents, so they are watching TV cookery programs. People need the book as well, because the shows go too quickly. Also, I think more people travel by cookery now – food has become an important part of tourism. A food book might be something they take as much as a guide book.”

Owned by Gourmand International, this is the group’s third celebration of the culinary word and the biggest yet. It has added one more trade day – an extra sitting if you like – and there are 20% more stands this year, with talk of moving to a bigger venue by 2013.

Cointreau sees a healthy market. “At the bottom end you have lots of people buying fantastic cookbooks at low prices, and at the top end you have people buying very expensive cookery books that are more like art books, which are profitable because the margins are good. In fact, the top printer in China, Arton, which used to only handle art books, has now moved into cookery too because they’ve decided cookery books are so like art books.”

Cooking Up Profits Through International Growth

The health of the sector – in the UK at any rate – is borne out by figures from Book Marketing Limited’s Books and Consumers survey. It reports that, in 2011, some 16.2 million cookery/food/drink books were bought for £128m, compared to 15.2 million books sold for £124 million in 2010 and 14.5m/£112m in 2009. Research Director Steve Bohme says: “The cooking category is bucking the trend, with year-on-year growth that contrasts with a decline for non-fiction as a whole.”

Around 35% of the stands at this year’s fair have been taken by French publishers, with overseas publishers occupying the rest. Cointreau says that China is the number one market in terms of buying translations from other countries, and adds that it is now becoming interested in western wine as well. “But Latin America is growing unexpectedly quickly too. The 30 best cookbooks published in Latin America are equal to the best North American cookbooks, something that wasn’t the case five years ago. Peru, Chile, Argentina, Mexico are all very strong. The cookbook market is completely global now, and that has been pushed by TV, which itself is more global.”

Where was the best book on Jewish cooking published? Not Brooklyn or Golders Green, according to Cointreau. “It was in Colombia, by a Colombian Jewish writer.”

Naturally, there will be ample opportunity to sample all manner of delights during the five days of the fair (the final two are for the public), with 70 chef demonstrations, 36 wine, beer and spirit tastings and numerous food product giveaways. Michel Roux Sr. is President of Honour this year and he will be giving a demonstration in the International Show Kitchen on the final day of the fair.

The Gourmand World Cookbook Awards take place on the eve of the fair, on Tuesday 6 March at the Folies Bergère, and act as a kind of hors d’oeuvres – a pretty splendid one – to the fair itself. Winners in numerous categories will be announced here, with a deliberate focus on what might be termed real cookbooks, rather than those that are a celebrity vehicle.

It may sound contradictory, but Cointreau believes cookbook publishing has a strong digital future, too. He thinks print and digital will complement each other. “I think people will want both. The e-book is cheap, but they might want the high quality book for their shelves. The Chinese group East Eat is bringing 40 people to the fair this year, as opposed to five last year. They sell 30 million cookery e-books a year. Although they look internally at the moment, if they decide to come to the west, it will be a different ball game for everyone.”

Cointreau speaks with some knowledge of the Chinese market, since he lives in Beijing with his Chinese wife and young daughter. China is the guest of honor this year, with Brittany the featured region and beer the product focus.

It’s an obvious question but one that Cointreau seems to enjoy answering. What are his own culinary skills like? “I’m much better at eating than I am at cooking. I don’t rate myself in the kitchen very highly. But I have a passion for eggs in many different forms. Funnily enough, Michael Roux, who is our President of Honour, has a passion for omelettes – he makes the best omelette you will ever eat.”

A tempting offer: The Paris Cookbook Fair is offering journalists wishing to cover the event a trip to the Gourmand World Cookbook Awards on Tuesday, 6 March, a tour of the legendary food market of Rungis, lunch in a wine cellar and drinks at Le train bleu restaurant at Gare du Lyon. Details from Alex Hippisley-Cox at ahipcoxpr@btconnnect.com

DISCUSS: Will Digital Editions Ever Replace the Printed Cookbook?