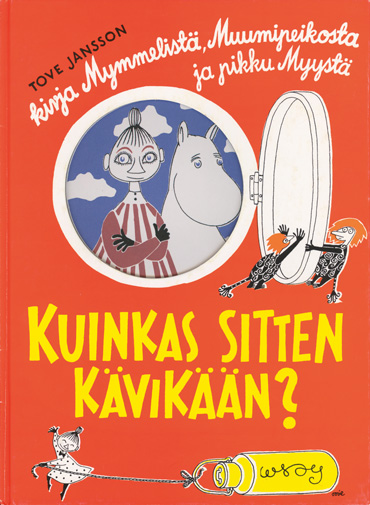 Finland’s Tove Jansson is the author of novels, short stories, picture books, and comic strips beloved by children and adults alike. Neil Gaiman called her works, “A lost treasure now rediscovered…A surrealist masterpiece.” She’s been described by Philip Pullman as “a genius of a very subtle kind. These simple stories resonate with profound and complex emotions that are like nothing else in literature for children or adults: intensely Nordic, and completely universal.” Sir Terry Patchett simply says that “she is undoubtedly one of the greatest children’s writers that has ever been.” Now, WSOY, her Finnish publisher of the classic Moomin books for more than 60 years, has begun working with Finnish e-book and mobile game publisher Fudeco Games Oy to bring the Moomin books into the digital age

The first title will be based on 1952‘s The Book About Moomin, Mymble and Little My and will be officially launched at next year’s Bologna Book Fair.

Jansson’s Moomins consist of a family of hippo-like trolls who live in Moominvalley; Despite their having made their first appearance in print in 1945, they are a good fit for the digital world, says Lippo Luukkonen, publisher, WSOY Children’s books and Young Adult Fiction. “The picture book when first published had holes in the pages that gave it sort of a 3D effect,” he said, adding, “It was ahead of its time when it came out.” The e-book, which is in the beta phase, will include animation, voiceovers, sound effects, and other interactive features, and will also take the original 3D effect from the printed page to the digital screen.

“We’ll use the existing 3D effects to build up some added value for the e-book, explained Luukkonen. “We’re trying to speak to the original magic of the story. We’re not trying to build up something that wouldn’t work in that context. We want to maintain the artwork and original idea of the book. It’s quite challenging to compete with the gaming industry, so you need to look to the magic of the book itself.”

WSOY’s deal with Fudeco is for global distribution, and as such, the hope is that they’ll be able to entice foreign publishers to translate the work, especially in Europe, the UK and Japan, where the Moomins are most popular.

In the U.S. and Canada, the markets for the Moomins are small but growing: Macmillan’s Farrar, Straus & Giroux and Square Fish imprints reprint editions of the 11 Moomin titles, Drawn & Quarterly publishes comic editions, and Chronicle Books recently signed an agreement for games and stationery.

“For us, [the e-book deal] is an interesting opportunity to build new content based on the Moomin property on a new platform, said Luukkonen. “We have worked with the Moomin characters for a long time, so it’s quite natural for us to invest in this.”