Challenges: First half of 2022, the German market has a sales shortfall of 11.1 percent in the local book trade compared to 2019. 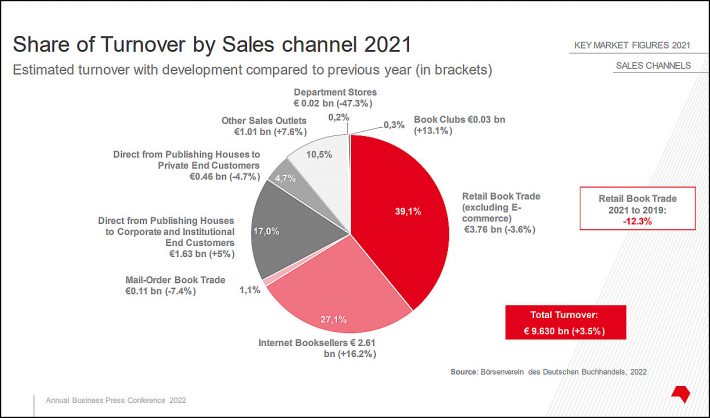 ‘The Return of Events Is Essential for the Industry’

The top-line assessment from the German book publishing industry announced today in a news conference from the Börsenverein des Deutschen Buchhandels, Germany’s publishers and booksellers association mentions “a consumer slump” as well as the effects of the still-ongoing coronavirus COVID-19 pandemic and a paper supply crisis.

“The total turnover of the industry rose by 3.5 percent in 2021,” says today’s report from the Börsenverein. “Nevertheless, the past two years have been very challenging for the industry from an  economic perspective.

“It’s now facing new hurdles in procurement bottlenecks, increasing cost pressure, and the effects of the Russian attack on Ukraine.

As the Börsenverein’s team is careful to point out, a rather specific sense of unease accompanies the current-year six-month figures—that 11.1-percent sales lag—because experience has shown that the more diversity-driven content can be what’s hobbled in such a scenario. 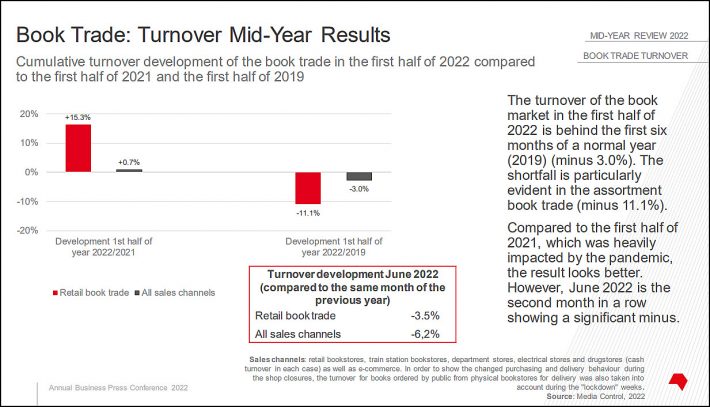 “In times of tight budgets” the report tells us, “publishers also tend to focus on ‘safe’ titles. The offbeat, the courageous, the innovative then sometimes miss out.”

And this feeds into one of the more prominently expressed observations of the day’s news conference: “The return of events where people can meet face to-face, like Frankfurter Buchmesse [October 19-23], is essential for the industry; such events increase public awareness of books and are indispensable for the  business and networks in the industry.” 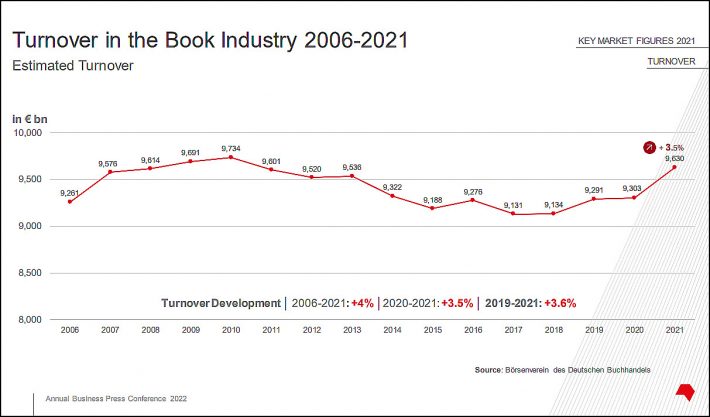 In speaking to the newly released figures, Karin Schmidt-Friderichs, chairwoman of the Börsenverein, is quoted, saying, “The  book industry has proven itself during the coronavirus crisis. 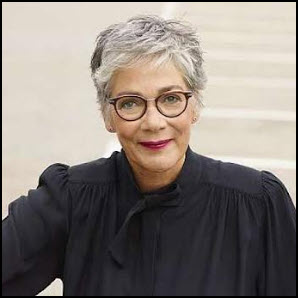 “Thanks to a high degree of resilience, creative solutions, and a strong digital competence, bookstores and publishing houses have succeeded in inspiring people to read and in supplying them with books, thanks to stable logistics, despite long lockdowns.

“It fills me with great confidence that the demand for books, especially among young readers, was high.”

The impact of the pandemic, however, Schmidt-Friderichs says, placed what’s described as “a heavy economic burden on bookstores and publishers.”

She says, “The bookstores’ growing online sales were offset by high costs for logistical handling. This reduces earnings for many, which is  a major factor in an industry with fundamentally low margins. 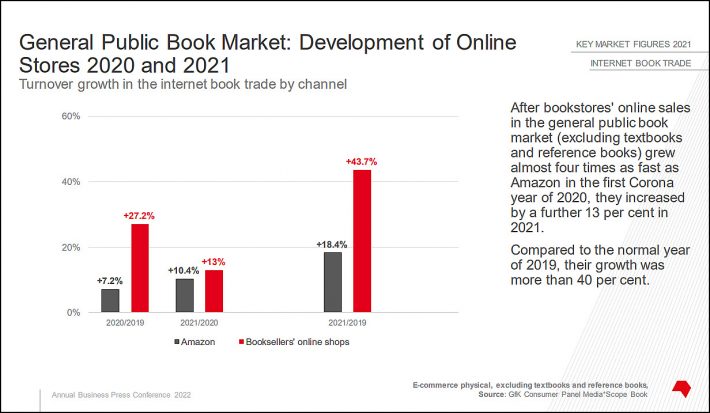 The German market research company GfK—Gesellschaft für Konsumforschung, or Association for Consumer Research—in June identified what’s being described as “a new all-time low for consumer confidence” in the German market.

Retail traffic in city centers is currently still significantly below the pre-coronavirus levels, according to the research. In addition, companies in the book industry are experiencing significant price increases for energy, raw materials, and staff wages.

According to the German Federal Statistical Office, printing costs for books in May rose by 21.1 percent compared to the same month in 2021. In December, it was still 3.8 percent, demonstrating a precipitous drop in the months between December 2021 and May of this year.

The price of graphic paper and cardboard is also rising and was 58.2 percent higher in May 2022 than in the same month of the previous year. 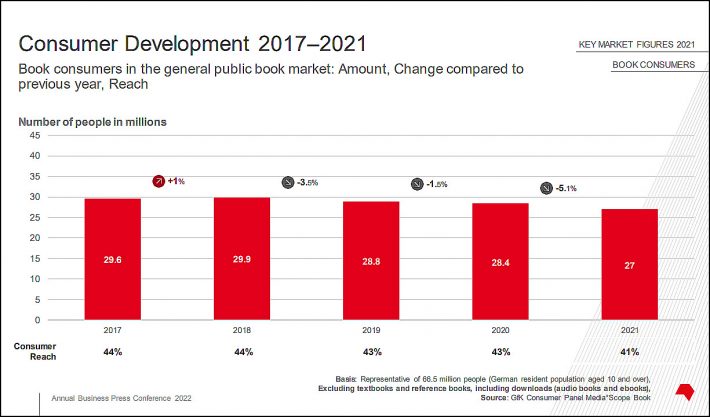 Vom Cleff: VAT on Books Should Be Zero

The Börsenverein’s managing director, Peter Kraus vom Cleff today made a point of looking at issues arising in the current-year performance of the German marketplace, January through June.

Speaking of how the German market was weakened by the pandemic, only to find new “crisis factors” waiting this year, Kraus vom Cleff said, “The Russian war of  aggression against Ukraine and its consequences are having a severe impact on people and are leading to drastic uncertainty and a reduction in consumption.

“It’s becoming more and more apparent that the widespread reluctance to spend is also having an impact on the book trade.

“In addition, rising costs and procurement bottlenecks—for example for paper—are putting publishers and bookstores under pressure.”

Reflecting the urgent stress indicators from the GfK research, vom Cleff has called for fast government action, saying, “In the face of an economic crisis of such historic magnitude, we call upon our politicians to support the affected industries.

“For the  book industry, for example, the reduction of VAT on books to zero percent with a full deduction of input tax, which has now been made possible through EU legislation, would be a great help.

“Structural support is also required to maintain diversity in the book market. In addition, we need programs for the revitalization of city centers, which are well thought-out and well-funded, such as those currently being called for by the German Cultural Council together with an alliance of associations. As  cultural centers and ‘third places’ par excellence, bookstores can play an important role in revitalizing city centers.” 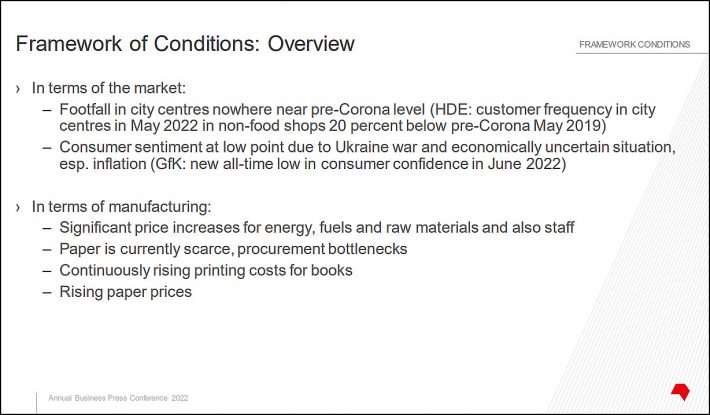 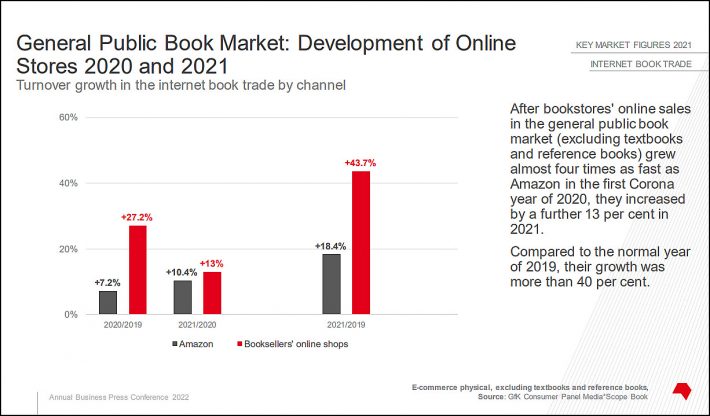 The positive sales results in 2021 are reflected in almost all general public product groups.

The prominence of backlist seen in some world markets did not hold sway in 2021 in Germany. Last year’s book purchases were more concentrated on bestsellers: while overall sales fell by 3 percent, sales of the top titles on the bestseller list rose significantly. Overall, sales of the Top 10 titles increased by 23.6 percent. In the fiction category, it was almost 40 percent. 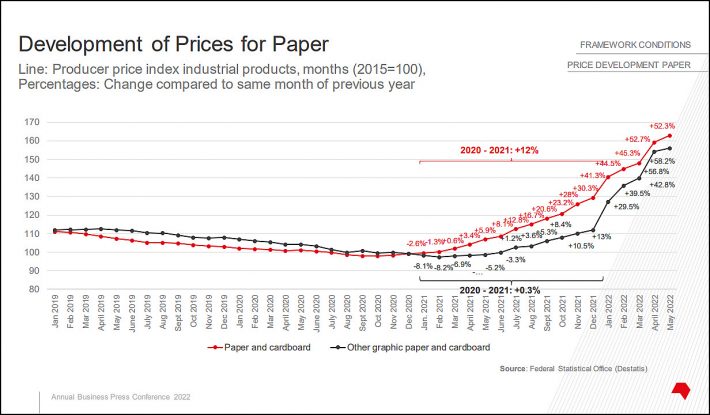 Demand for digital book formats continued to rise again in the second pandemic year, marked by lockdowns and store closures. 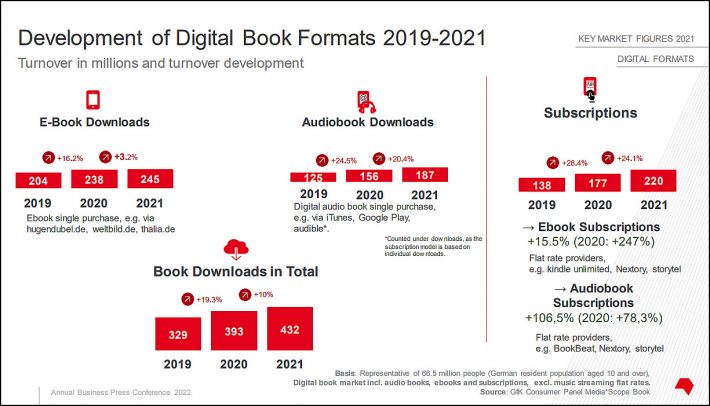 Number of Book Buyers: Down by 5.1 Percent

Perhaps among the most significant of these observations, the number of people buying books continued to decline in 2021.

In addition, the average purchase frequency among the youngest group of buyers increased significantly from an average of 6.8 books in 2019 to 8 books in 2021. 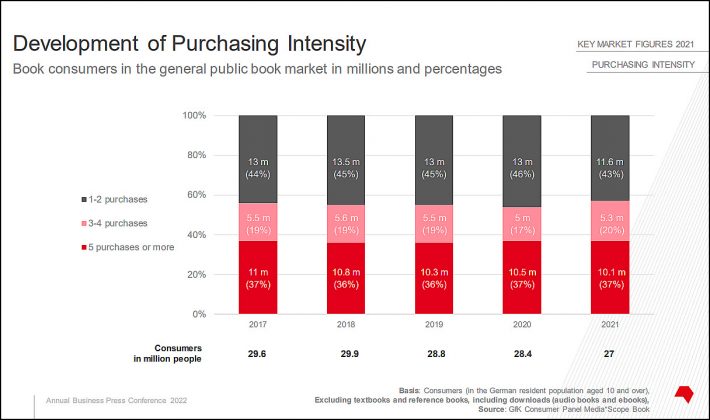 Frontlist Releases: Down by 7.5 Percent

The number of first editions by publishers fell more significantly in 2021 than in previous years. 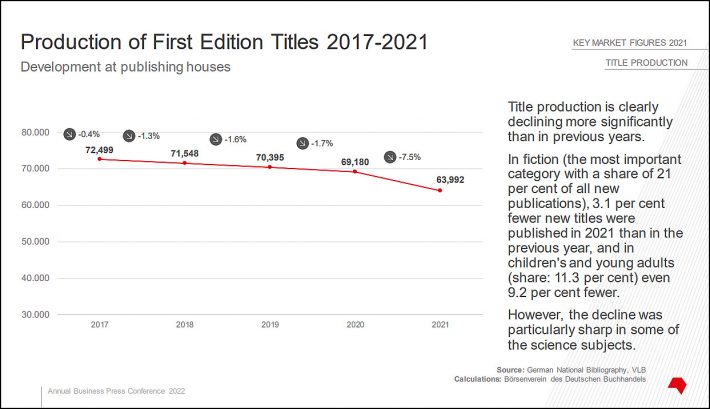 What will be interesting about this in some of our world book markets beyond Germany—the United States’ in particular—is that it reflects a lagging share of the market for frontlist titles, first editions as they’re called here. After years of wishing aloud that backlist would sell more robustly, the pandemic years have seemed to enrich interest in backlist, possibly at the expense of frontlist sales.

On the other hand, when it can be demonstrated that there’s not as much inventory coming into the frontlist as before, a reduced trade in those first editions makes sense. In Germany, it appears that this could easily be a factor with its newly released fiction titles and even those in children’s and YA output showing smaller numbers.

When Publishing Perspectives spoke with students this week at New York University Center for Publishing’s Summer Institute, we asked how many of them during the pandemic years had found themselves consciously reading more backlist than before. As much as a third of this group of roughly 75 students said that they had, indeed, chosen backlist titles consciously and purposefully, rather than looking for the newest releases.

While its not clear yet which of the many forces at work in our international markets may be slowing frontlist sales (where that phenomenon is observed), it remains something coming under careful study for many publishers and advisers in the industry. 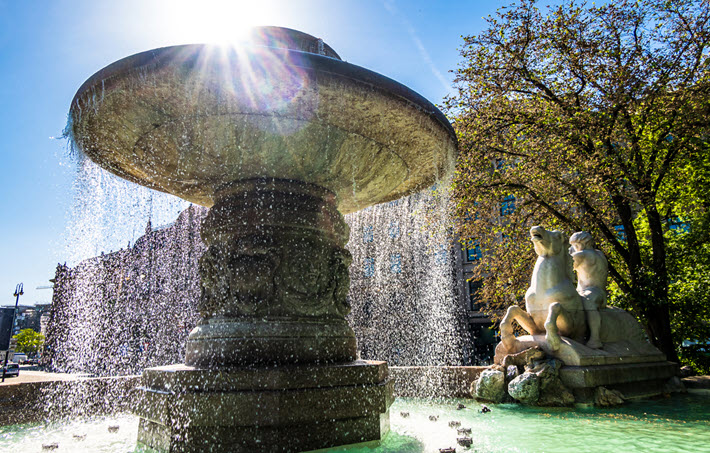 The Wittelsbacher Fountain in Maxvorstadt, Munich dates to 1893. This photo is from July 7. Image – Getty iStockphoto: Foo T Too