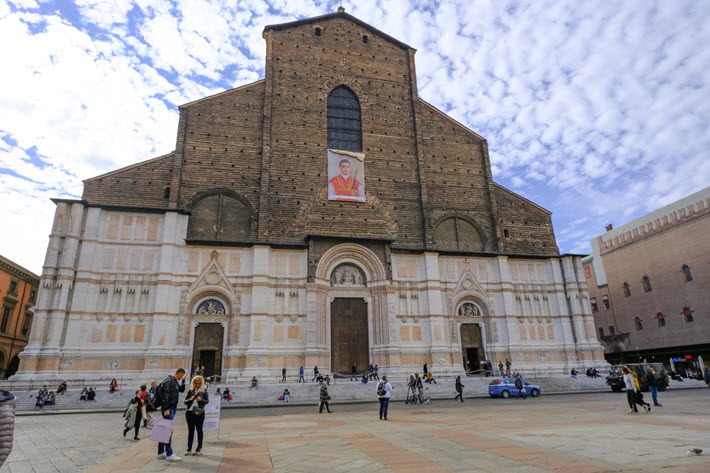 The upcoming Bologna Children’s Book Fair program will include instructional sessions set up by the Bologna Book Plus team.

Ahead of the 2022 Bologna Children’s Book Fair (March 21 to 24) a second doing of the Bologna Book Plus program is being planned, again with Jacks Thomas guest-directing.

While in last year’s digital evocation of Bologna—the second year in which the coronavirus COVID-19 pandemic had scuttled the physical show—the conference element of this series was programmed for one day, the 2022 edition presumably will have its moments across several days so that professional trade visitors can schedule their meetings and consultations around the programming.

Bologna Book Plus is described as an “exhibit, conferences, and training program,” suggesting that what we’re seeing now is the training part and that we’re likely to hear more about conferences and exhibiting going forward.

In essence, this is Bologna’s attempt to augment with more general industry programming the children’s publishing focus that has made it the world’s largest trade show for children’s and young adult books and illustration. Bologna Book Plus this year is being tied to the international exhibit part of Bologna’s dizzying array of features, and is being designed this year to “host a series of curated events and training programs targeted at a general trade audience.”

Included in the Plus effort this year is an event for people who want to become literary agents. The session has one of those titles that includes the word “successful” in a funny context: “Call Your Agent: How To Become a Successful Literary Agent”—as if there has ever been a course offered called “How To Become a Failed Literary Agent.”

(Bologna Book Plus is hardly alone in this kind of unintended humor. The Costa Book Awards program currently is observing an admirable anniversary with the line, “Celebrating 50 Years of Enjoyable Books”–as if for just a fleeting moment half a century ago they entertained the idea of celebrating the unenjoyable reads. Clever them for making the right choice.)

Of course success is the goal, and we have today (February 1) the literary-agent course listed below among others in a quick rundown of the coming activities.

In a prepared statement on the release of these plans for Bologna Book Plus, Thomas is quoted saying that after the program’s digital inauguration in 2021, the in-person event this year, will be “building on the digital initiatives of last year.

“The program reflects the ingenuity, creativity, and ambition of our industry across the globe,” Thomas says, “while introducing events and conferences that support the industry of tomorrow.

“Bologna, at the heart of the book world for more than 50 years, is the perfect opportunity to embrace everything that publishing has to offer and we’re looking forward to being there with you.”

At this point, we aren’t being offered ticket prices. Ticketing information, according to a note on the site, is “coming online soon.”

“How to Sell Rights and Understand Licensing in Children’s Books” on March 20 “is aimed at those starting out in rights, contracts and licensing in children’s publishing.” Be aware that this one is set for five hours, which for some will mean some careful scheduling. It’s to offer “training in the fundamentals of rights, contracts, and licensing, including copyright, intellectual property, licensing, and merchandising and the selling process,” with its emphasis on children’s content.

“How to Self-Publish in Italy and Abroad” on March 21 is pretty self-explanatory, and is to include “insights into the Italian self-publishing scene and beyond, and understanding the process of self-publishing from start to finish.” It’s styled as a conference event and is timed for four hours.

“Call Your Agent: How to become a Successful Literary Agent” (not a failed one) on March 22 is set for five hours and is to include instruction on “the skills required, how to get started,” and information on rights and contracts.

“Jackets Off“—not unlike a bake-off—is a competition in illustration of book covers, of course, and will comprise two events set for March 23 and 24. One is a showcase (winner on the 24th), and the other is a training sequence with a portfolio review and seminar, this year be centered around one title published across many international editions. The Handmaid’s Tale is that title, and the program will look at different illustrative approaches in various cultures and languages. We hope this might include the work of the Milan-based twins Elena and Anna Balbusso, whose Bauhaus-resonant illustrations for Margaret Atwood’s best-known work we looked at here and here.

More information will, of course, be forthcoming. 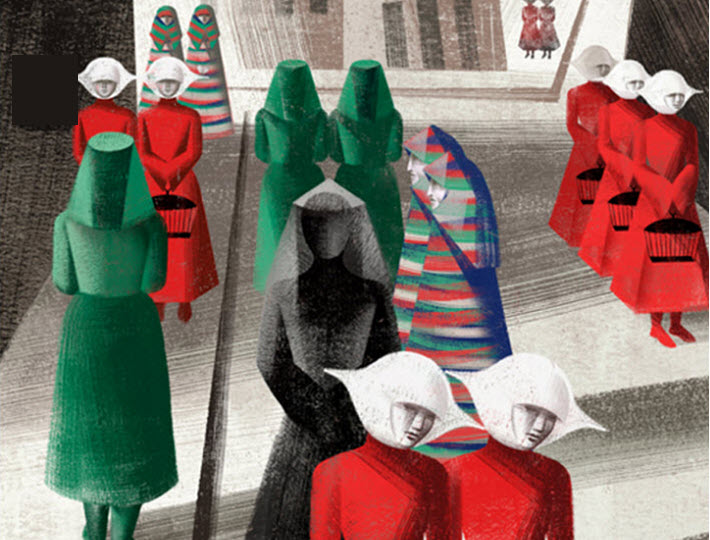 A detail from ‘City,’ one of Anna and Elena Balbusso’s illustrations for ‘The Handmaid’s Tale’ for The Folio Society