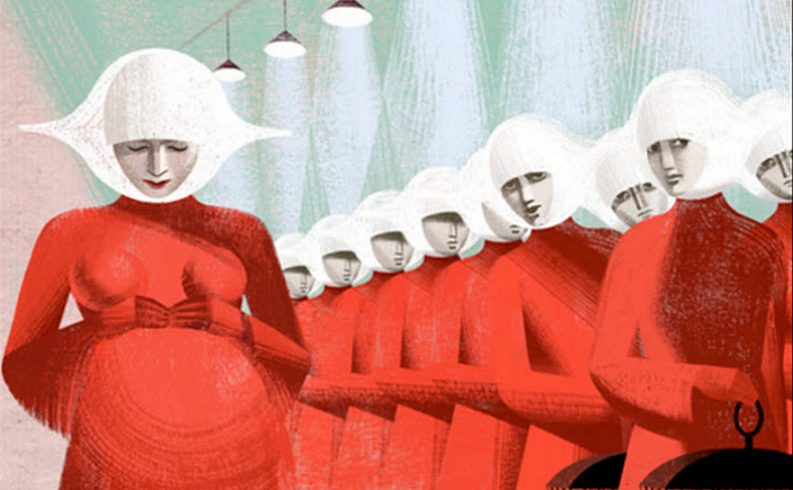 Part 1 of two: ‘We’d been waiting so long for a story like this,’ say Elena and Anna Balbusso, who illustrated Margaret Atwood’s ‘The Handmaid’s Tale’ for The Folio Society. 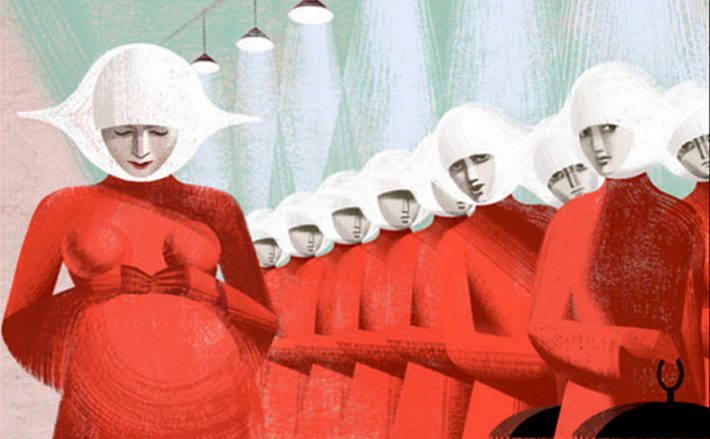 Excerpt from ‘Pregnant,’ one of Anna and Elena Balbusso’s illustrations for ‘The Handmaid’s Tale’ for The Folio Society

Part 2: The Balbussos talk about some of the aesthetic elements they chose for their evocation of Margaret Atwood’s world of ‘The Handmaid’s Tale’—and about how they work together.

‘The Handmaid’s Body as an Empty Object’

Thinking can hurt your chances,” says Offred in Margaret Atwood‘s 1985 The Handmaid’s Tale. “And I intend to last.” 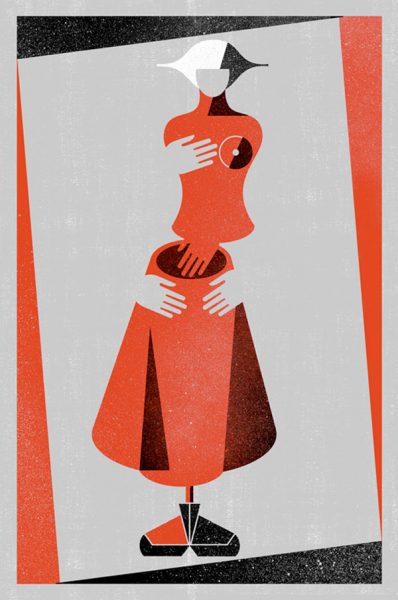 ‘The Handmaid’s Tale’ cover by Anna and Elena Balbusso

Such fearful tactics in time of oppression are part of what makes Atwood’s classic stand with the work of Huxley and Orwell. And as political forces bully freedom of expression this year in many parts of the world, few screen adaptations have been anticipated as keenly as the Hulu miniseries based on the novel. It began its weekly streaming on Wednesday (April 26) and will introduce a new episode each week.

Matt Wilstein’s Daily Beast interview with Atwood reminds us that there have been some in the States who thought that The Handmaid’s Tale was a piece created in reaction to the Trumpian overtake of Washington. As Atwood points out in her response to Wilstein, the book is 32 years old and there is no Trump character in it.

Nevertheless, the sheer elegance with which Atwood—winner of the 2016 PEN Pinter Prize—draws her world, warped to the sinister power-plays of ideological impact, is profoundly chilling to anyone who reads or re-reads the book today. This has generated enormous interest in the new production, a timely arrival, however inadvertently its moment may have coincided with the vulgarity of today’s political pageant.

It’s always good to see a formidable writer’s work revisited in times of new relevance; in this case, it seems urgent.

“There is more than one kind of freedom,” goes a daunting tenet put forward in the book. “Freedom to and freedom from.”

According to its listing at IMDB, Atwood has participated in the writing of the Hulu production’s 10 episodes—along with Bruce Miller of The 100, The Devil You Know, Men in Trees, and other works. Atwood also is credited as a production consultant on the film interpretation.

Julie Bergoff is given series production design credit, and that’s a good place for us to turn to our own entry point to the material today.

While Houghton Mifflin Harcourt is the publisher of the main trade copy of the book sold in the States today, another edition of the book was published first by The Folio Society in 2012.

It has been reissued this year and carries with it a compelling argument for a deeply illustrated edition of an important work. The Folio cover recalls the aggressive, dark whimsey of the Bauhaus—and telegraphs the designers’ focus on the book’s feminist context. 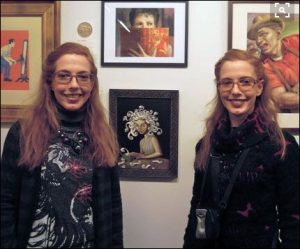 Folio’s edition of the book features the work of the Italian illustrating twins Anna and Elena Balbusso. Based in Milan, the sisters won a 2012 Gold Medal from the Society of Illustrators for their work on The Handmaid’s Tale.

Among the most accomplished and acclaimed illustrators working in serious literature and other fields today, the Balbussos have agreed to let us put several questions to them about their work on Margaret Atwood’s book for Folio. Because of the length of our exchange, we’ve published our interview in two parts. The second portion is now available here.

The illustrative sisters Balbusso, as a rule, decline to reveal which of them is responsible for one part or another of their work. And in answering our questions, they’ve chosen to maintain their practice of speaking as one voice. 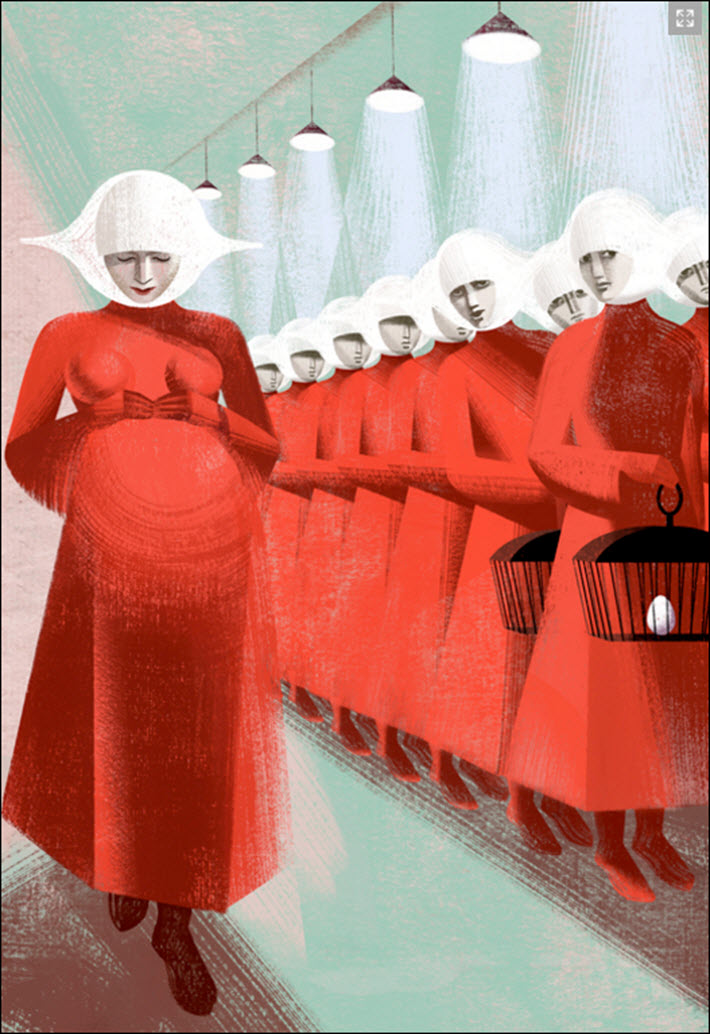 ‘Pregnant,’ from Anna and Elena Balbusso’s illustrations for ‘The Handmaid’sTale’ for The Folio Society

‘Never Closer to Reality Than Today’

Publishing Perspectives: Your work for The Handmaid’s Tale is curiously iconic as it relates to Margaret Atwood’s book. When you were working on this book five years ago, did you have a sense for how relevant and timely it might one day feel?

Anna and Elena Balbusso: We read The Handmaid’s Tale for the first time in 2012. Unfortunately in Italy it is a little-known novel. We read the italian translated text to follow the original English text. The story was, and is, an instant revelation, not least because the issue of women’s rights has always been keenly felt by us.

“We were struck by how Margaret Atwood’s novel addresses the topic of the possession of a women’s body—still taboo in our hypocritical society. Atwood draws attention to the status of women today: there is still a long way to go.”Elena and Anna Balbusso

We have always perceived gender difference since we were children. Gender equality, the importance of education, and economic independence for women are values in which we’ve always believed. We’re against gender stereotypes that impose obligatory “choices” on women. We believe in freedom of the individual in general, beyond sex and gender.

The Handmaid’s Tale has never been closer to reality than it is today. But even when we created the illustrations in 2012, we felt that it captured an absurd but possible reality. The novel depicts an extreme reality where everything that a woman is forced to undergo in our current world—despite many advances in female liberation—is exacerbated to the limit.

During great economic crises, there always are attempts to remove the acquired rights of women. Women in many fields have never reached parity with men. There are still many differences between cultures.

A woman’s body is a theme in art and literature that has always impacted our sensitivities. We were struck by how Margaret Atwood’s novel addresses the topic of the possession of a women’s body—still taboo in our hypocritical society. Atwood draws attention to the status of women today: there is still a long way to go.

From the point of view of art, this fantastic fiction gave us the opportunity to explore all the artistic sources that are our true passion. 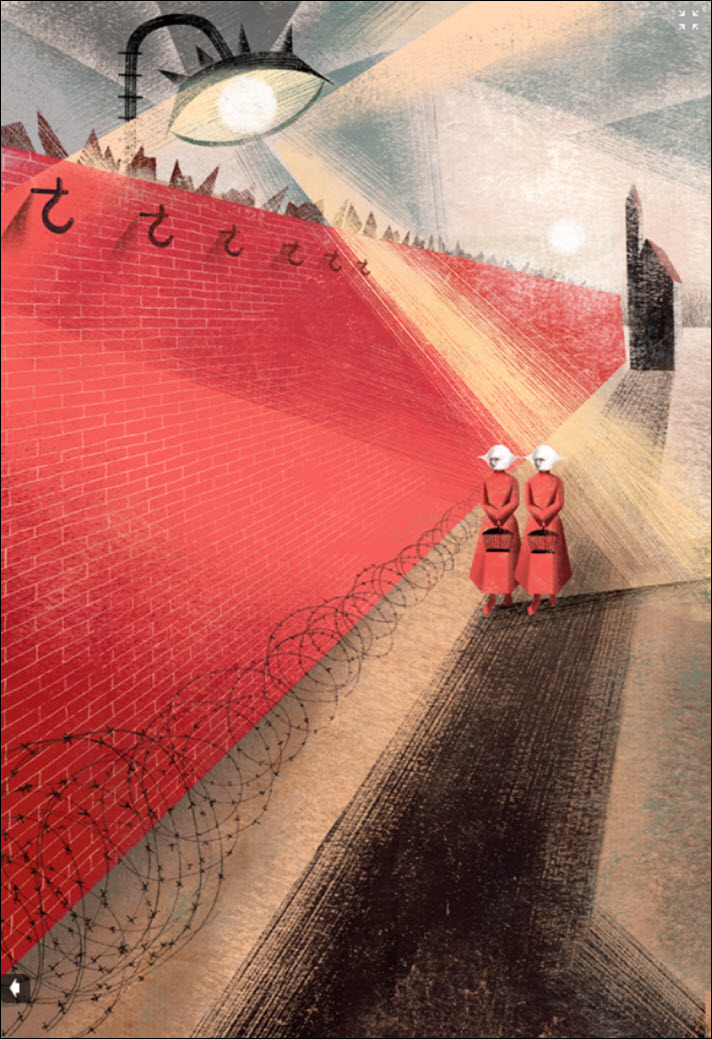 ‘Red Wall,’ from Anna and Elena Balbusso’s illustrations for ‘The Handmaid’sTale’ for The Folio Society

‘Difficult to Choose Only Seven Scenes’

PP: What proved the most difficult part—and/or the easiest part—of your designs for The Handmaid’s Tale? Was there an element of it that was especially hard or especially easy to accomplish?

A/EB: The Handmaid’s Tale is perfect for our personality. We’d been waiting so long for a story like this. We immediately understood the importance of this project, its quality and the literary wealth of this exceptional text, all of which facilitated our work.

“The Italian avant-garde movement Futurism comes into play, as do Russian Constructivism and Fascist-period design. In all of our work, there’s a clear reference to painting, sculpture, architecture.”Anna and Elena Balbusso

We had a clear view of our inspirations for this work, making it easy to create the images.

The commission was for the frontispiece, for six full-color illustrations, and for the two-color cover. It was very difficult to choose only seven scenes, and we gave up on many interesting options.

We tried to focus attention on the woman’s body, this is the main theme of our images. Some situations in the story are very strong and raw, and we preferred to leave the interpretation of those to the readers. We wanted to create questions in the readers’ minds, capturing their curiosity, attracting their attention, without describing too much in detail but only suggesting.

In general, we love to leave viewers of our work the freedom to add different keys of interpretation of their own, depending on their different sensitivities. To give us a relatively free visual basis for our interpretation, we chose a Futurist tone with accentuated perspectives and strong light.

The Italian avant-garde movement Futurism thus comes into play, as do Russian Constructivism and Fascist-period design.

In all of our work, there’s a clear reference to painting, sculpture, architecture. Most of our projects require a strong knowledge of art history. Italian art, of course, plays a key role in our work. And we found The Handmaid’s Tale cover design harder than the interior illustrations.

We wanted a very concise image with a strong idea as a graphic poster of Russian Constructivism. We wanted to  communicate the idea of the handmaid’s body as an empty object—a thing, not a person with a soul. We created a lot of options, and we’re very happy with the end result.

In 2012, in fact, these images drew many prestigious international awards beyond the Gold Medal from the Society of Illustrators in New York for the “pregnant” frontispiece. We’re very proud and honored by this year’s re-issue of The Handmaid’s Tale Folio edition, too. Our thanks again to Margaret Atwood and The Folio Society for choosing us to create this project.

Part 2: The Balbussos talk about some of the aesthetic elements they chose for their evocation of Margaret Atwood’s world of ‘The Handmaid’s Tale’—and about how they work together.