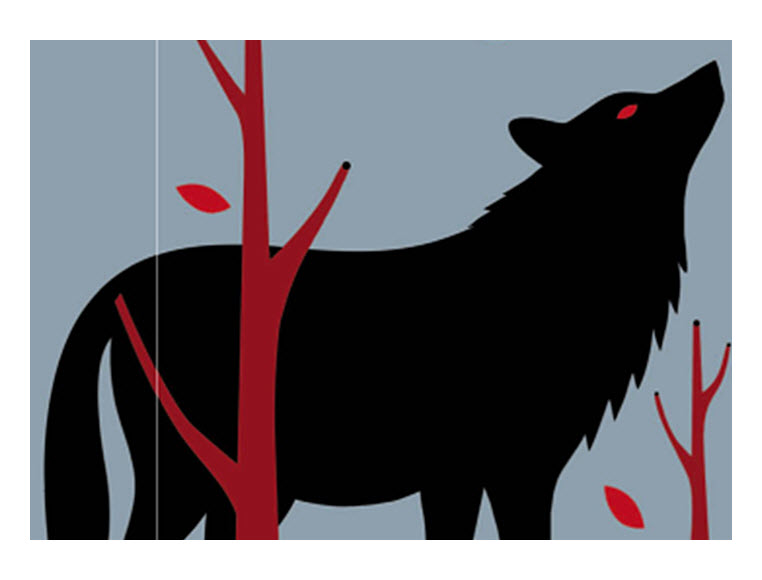 Italian author Luca D’Andrea, whose trilogy sold into 33 territories, published his latest work as a newspaper series in La Repubblica. A book release is due in January from Einaudi. 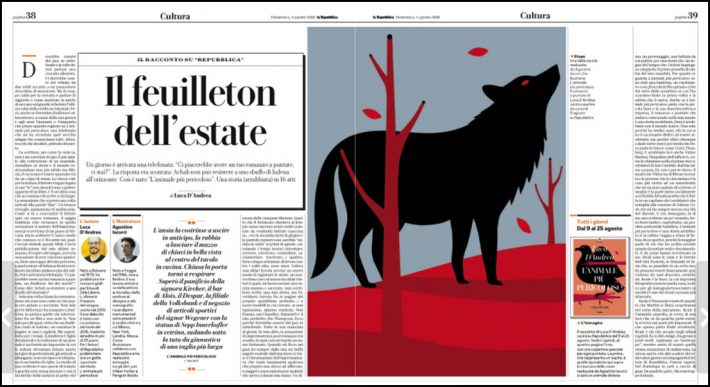 From the ‘La Repubblica’ feuilleton premiere publication of Luca D’Andrea’s ‘The Most Dangerous Animal,’ coming to Frankfurt with all rights other than Italian available. The author’s trilogy has sold into 40 languages and territories. Image: Piergiorgio Nicolazzini

‘Writing Is Not an Exercise of the Ego’

Just when you thought there was nothing new under the Tuscan sun in how you roll out a bestselling crime author’s latest book, Italian newspaper La Repubblica would like you to take a look. 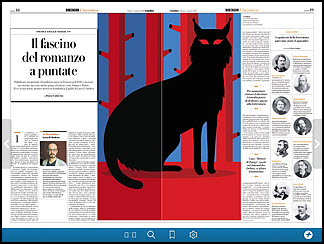 Last month, the venerable Italian newspaper borrowed a phrase from its French neighbors, feuilleton. The term, in use from the mid-19th century, refers to a European newspaper’s magazine, cultural, or feature section, and most particularly to a literary composition.

What the editors were revealing—with ads promising that readers might find their breath taken away—was a brand-new novel by Luca D’Andrea. Now 40, he’s the bard of Bolzano, and focuses his crime thrillers in the borderlands of the Southern Tyrol.

His new work, L’Animale piu pericoloso (The Most Dangerous Animal) ran in the newspaper, one chapter per day, for 16 days. La Repubblica went to considerable lengths to deliver the new work attractively, engaging artist Agostino Iacurci to lend his iconic use of opaque shapes and whimsy to illustrating the segments and actually commissioning the work from the author—that’s how the rights on this one were handled.

The editors also were clearly engaged with the new work, the newspaper’s Ilaria Zaffino writing, in a follow-up to the serialization that the book is ‘An angry story, which has turned into a great success.”

The anger? Zaffino talks to D’Andrea for that, who says, “I don’t like the world we are building, where human beings are just customers, where you can sell and buy everything. The thing that most angers me is that even writers have abdicated their real task, that of humanizing reality.”

So it is, Zaffino reports, that subscribers of La Repubblica have showered the paper with praise for this “summer noir,” as it’s being called. And D’Andrea has said that he feels less a debt to Balzac and Dickens—earlier brothers in the tradition of feuilleton—than to Dashiell Hammett, Raymond Chandler. He may even be throwing a come-hither look at Netflix’s International Originals unit when he mentions how much “today’s reader loves TV series.”

A strong sense for climate issues underlies some of D’Andrea’s new story. Zaffino compares one of D’Andrea’s characters, 13-year-old Dora to the 16-year-old Swedish advocate for Earth, Greta Thunberg who’s at the United Nations this week. Dora is at the center of the novel’s tale. She disappears into a forest, triggering searches and deepening mystery.

Here’s something of how Luca D’Andrea came to find himself involved in the new serialization project, from an English introduction by the author that Nicolazzini has provided to us: 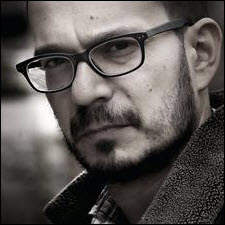 “There should be jazz playing in the background and I should be wearing a loosened tie. There should be a glass of cheap whisky alongside an ashtray overflowing with butts. But it’s too hot for ties, and talk of cigarettes is like showing the death of a dog on the big screen: Western civilization’s final taboo. However, although the word feuilleton comes from the 19th century, it’s the ’40s and ’50s I think of when I consider the origin of L’animale più pericoloso, a phone call that reminded me of the old adage we all know: Be careful what you wish for, lest it come true.

“The way I see it, writing is not an exercise of the ego. It’s more akin to the creation of a mandala. It’s the cancellation of oneself and the world by the construction of another one, purer but fictitious, whose purpose is to be swept away by a wave of the hand. And the same goes for reading. The reader who’s too attached to his or her ego will never be able to fully enjoy a book.

“But writer and reader have something else in common too: the feeling they get when they come to the words “The End.” A rude awakening cloaked in melancholy. How to dispel it? The reader opens a new novel, the Buddhist sage (who acknowledges the feeling as a manifestation of impermanence) moves a step closer to Nirvana, but what about the writer? The only way I know is to get into trouble. To seek out ideas and stimuli, a new challenge.

“With the publication of my latest novel, Il respiro del sangue, I felt I’d come to the end of something, maybe a stage in my journey, and that feeling of Sehnsucht stayed with me longer than usual. Then came the phone call. “We’d like to publish a novel by you in installments, as a feuilleton. Are you up for it?”

“You might as well ask, can Captain Ahab resist the sight of a whale spout on the horizon?”

When D’Andrea’s agency—Milan’s PNLA—started messaging us, a little breathlessly, with excitement about the project, we contacted the Piergiorgio Nicolazzini Literary Agency’s eponymous chief to ask just a few questions about this impressive rollout for a national readership that loves its crime drama perhaps over all other genres. 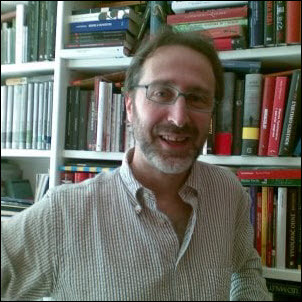 Nicolazzini reminds us that D’Andrea’s claim to fame is a trilogy that captured the market’s imagination across four years with La sostanza del male (2016), Lissy (2017),  and Il respiro del sangue (2019). And those books have sold so spectacularly on the international stage that we asked whether the new Most Dangerous Animal will be presented at Frankfurter Buchmesse.

The answer is a promising si for publishers looking to capture rights to the new work because, Nicolazzini tells us, “No foreign rights deals have been made yet for such a new release, other than the Italian rights, which the house of Einaudi has locked down for a trade release in January.”

The list of rights sales for the trilogy that precedes this new release is impressive:

No wonder there are great expectations—to recall another great serialist—on the new work from D’Andrea.

And no wonder Piergiorgio will be waiting for  you at the LitAg with screenshots from La Repubblica.

“This one,” he tells us from Milan, “is on our Frankfurt Book Fair Hotlist.” 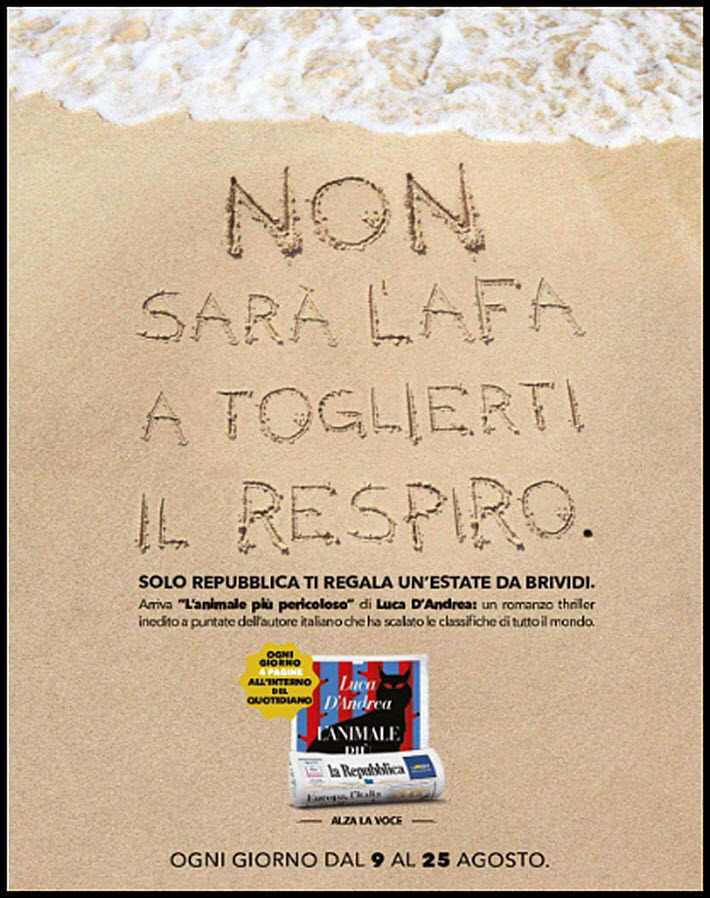 More of Publishing Perspectives on rights issues overall is here, more on the Frankfurter Buchmesse is here,. and more from us on the Italian market is here.