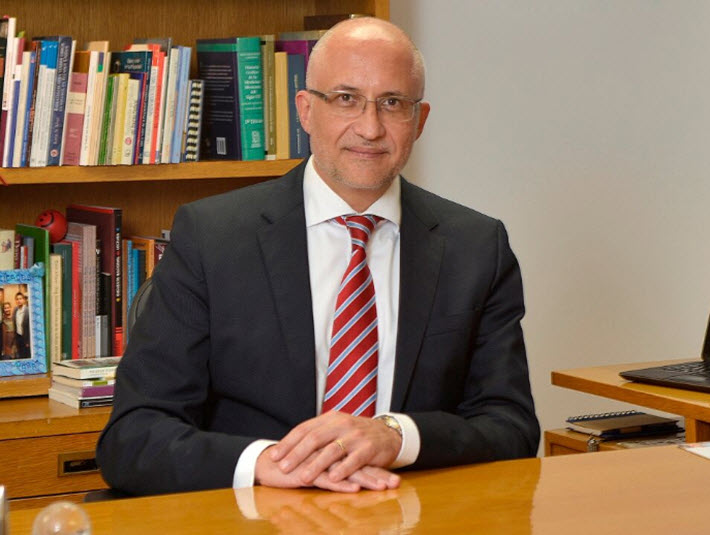 Hugo Setzer’s Manual Moderno publishes some 40 new titles per year and has an active catalogue of around 400 books in Mexico, a market in which, he says, censorship “is coming very close.” 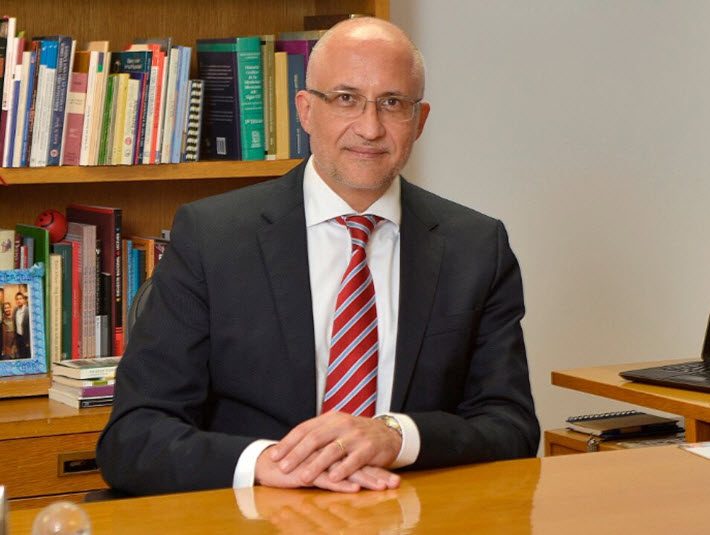 Editor’s Note: Today (October 11) here at Frankfurter Buchmesse, the International Publishers Association’s meeting has confirmed that the IPA’s vice-president Hugo Setzer will succeed Michiel Kolman as its next president, while the Sheikha Bodour Al Qasimi will follow Setzer as vice-president of the organization. We’ll have more news of IPA elections in the days to come.—Porter Anderson

‘A Question of Political Will’

At least six journalists were murdered in Mexico in connection with their work in 2017, according to the Committee to Protect Journalists. That puts Mexico third in the world in terms of lethal danger to journalists.

Among those killed was Javier Valdez, founder of the weekly news magazine Ríodoce. Six months before his death, Valdez presented his book Narcoperiodismo at the2016  Guadalajara Book Fair. During the programming about the book–which chronicles threats and violence suffered by Mexican journalists–Valdez spoke of the dangers facing the profession, and his determination to continue writing, despite criminals’ threats to silence him.

Following Valdez’s death, Penguin Random House’s literary director in Mexico, Ricardo Cayuela, published an open letter co-signed by 47 Mexican publishers and writers, calling for the perpetrators of the crime to be brought to justice. And PRH Grupo Editorial also launched a journalism prize named for Valdez, the first award of which was given in May to Mexican journalists Daniela Rea Gómez and Pablo Ferri Tórtola for their investigation into abuses carried out by the Mexican military between 2006 and 2014.

“While Mexico no longer faces the problem of government censorship, as the country has become more democratic,” says Hugo Setzer, “there’s now a question of self-censorship. At the moment, it’s a threat to writers. As a publisher, we don’t see the threat yet, but it’s coming very close. If things don’t improve we might say, ‘We had better not publish this title because we’ll get into trouble with the drug lords.’”

Setzer is CEO of Manual Moderno, a Mexico City educational publisher. The International Publishers Association (IPA) vice president—who delivered the association’s testimony in May to the Canadian Parliament’s study of the Copyright Modernization Act—will succeed Michiel Kolman as president of the IPA. And not least because of his work with the IPA, which annually awards the Prix Voltaire, he’s well attuned to issues in the freedom to publish.

“In previous years, you couldn’t publish a book criticizing the Mexican government so easily,” Setzer tells Publishing Perspectives, “but nowadays there’s no problem. The problem we’re having now has more to do with journalists who are under attack by drug cartels.

“At the level of newspapers and magazines, the freedom to publish is already under threat, and we should all be worried if a fellow publisher is facing a problem like that.”

Violence is the latest obstacle to publishing in the country, Setzer says, where currency devaluations and a lack of bookstores and government support for the industry already make publishing difficult. And where his publishing house is affected most directly, he says, has to do with where it’s deemed safe enough to operate. One no-go zone: the northeastern border state of Tamaulipas.

Nevertheless, Setzer says, the economic scenario “has improved since the 1980s, when there were currency devaluations almost every year, draining publishers’ investments and forcing many to leave Mexico.”

He says, however, that he’s also concerned about the prospect of president-elect Andrés Manuel López Obrador’s administration when he takes office in December, after the left-wing former Mexico City mayor won a landslide victory in July. Setzer says he’s concerned that López Obrador may be antagonistic to a free press.

Manual Moderno and Lessons of Adaptation

With an active catalogue of around 400 books and publishing 40 new titles a year, Manual Moderno started life in 1958 by purchasing the rights and translating a series of US medical books, a list on which the house was heavily dependent in the beginning.

When the medical books’ American publisher was bought out by McGraw-Hill, Manual Moderno lost the rights and income, which represented about a third of the company’s revenues.

“We had to restructure the company and go out and look for local authors and other books to translate,” Setzer says. “But we were able to adapt and it made us stronger because it broke our dependency.”

The company’s readership is mostly students, professionals and scholars, but Setzer says another important change in recent years has to do with the evolution in how students study.

“They read fewer books than before,” he says, “accessing more content on the Internet, and our overall sales in the undergraduate market have declined. We’ve had to find innovative solutions to meet that change.”

Those solutions include digital formats responsive to the students’ usage patterns. More than half the company’s catalogue now is available in e-editions, and the company is now working in EPUB 3 and is doing more about accessibility.

“For many of our psychology titles,” Setzer says, “there’s demand among visually-impaired readers, so we’re adapting our content. Our digital books will have a format that makes them accessible, with the software enabled to read out part of the book in audio and easier navigation, as well. He’s also looking at producing textbooks in audiobook formats.

Manual Moderno has co-published with two of Mexico’s largest public universities, the National Autonomous University of Mexico (UNAM) and the Universidad de Guadalajara, both institutions, Setzer says, that realize they need commercial publishers to make the titles they produce more widely available.

But he bemoans a lack of support from the government, including its policy of providing free textbooks to primary school children, blocking out the private sector.

“The publishing industry doesn’t receive a lot of support from the government,” Setzer says. “Publishers are exempt from VAT, for example, but bookstores are not, which means they have to write it off as expenditure, and that would be very easy to fix,” he says.

“It’s just a question of political will. And with the government producing all textbooks for ages up to six, there’s only one book for each subject, resulting in a lack of diversity, which is important for education and for the publishing industry.

“But the government says [producing a diversity of textbooks] would be too expensive, we’ve shown that it would only add a small increase in government expenditure, and the diversity of titles would make it worthwhile,” he says. After all, the government does buy from private publishing companies for junior-high-school textbooks.

Exports account for around 20 percent of the company’s book sales, Setzer says, and Manual Moderno has an office in Colombia. South America represents an important market to the publishing house, he says, despite the crisis in Venezuela, formerly a big book buyer.

“We try to use the local resources,” he says, “so a book being developed in Colombia will be printed there.

“There’s a lot going on in science publishing with translation from English to Spanish, but practically nothing the other way round, and so we’re exploring less traditional markets, such as the Arab world, India, Eastern Europe, and Asia.”

In 2017, Manual Moderno was the recipient of an award from the Mexican Center for Philanthropy (Cemefi) for its corporate voluntary work, and Setzer says the titles in his catalogue that he’s most proud of are in a series of guides for parents who nurture visually impaired, deaf and premature babies. It’s a project developed in partnership with the Universidad Autónoma Metropolitana and the country’s pediatrics institute, and it’s unusual for Manual Moderno because the books are distributed free of charge.

Setzer says he also includes piracy and the digitally-driven  push for free content as challenges to publishers.

“Piracy is not going to completely go away, but you need to contain it to manageable limits,” he says.

“You cover up one hole and another hole appears, but if you don’t do anything about it you will end up with a field full of holes,” he says.

“Countries still have a lot to do. It can be perceived that piracy alleviates certain social pressures, and governments are not as tough on it as they could be.”

Mexico is among nine Latin American countries on the 2018 Watch List of the US’ Special 301 Report on Intellectual Property Rights, an annual review of global IP protection and enforcement. As a part of that report reads, “Many of the listed trading partners, including Canada, Egypt, Indonesia, Mexico, Turkey, Turkmenistan, UAE, and Uzbekistan, do not provide adequate or effective border enforcement against counterfeit and pirated goods; in addition, many listed countries’ customs officials lack authority to take ex officio action to seize and destroy such goods at the border or to take such action for goods in-transit.”

“And there’s a global push to make content free,” Setzer says, “with very large corporations, tech companies, reaping benefits because they sell advertising with content they don’t purchase. Free content gives them a vehicle for that, and that’s damaging the publishing industry.

“It’s not easy to fight that push for free content, and we have to engage with that.

“Publishing is an interesting and a nice business,” says Hugo Setzer, “but not if you are interested in making money.”