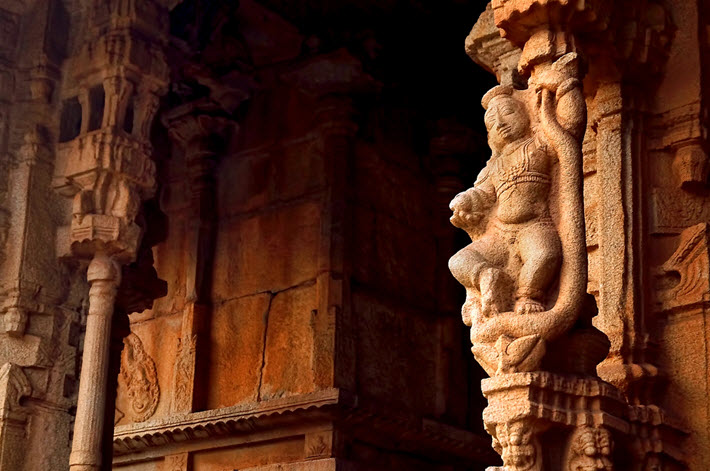 ‘The epics have always been in fashion,’ publisher Chiki Sarkar says in the ongoing discussion about India’s contemporary fondness for its ancient mythological tales. A detail from the Vittala Temple at Hampi, India. Image – iStockphoto: Aapthamithra

Earlier this year, we looked at the role that India’s mythology tends to play in its fantasy literature. Now, The Economist considers how Indian publishing, by discovering its own Game of Thrones, has created what the article terms a literary phenomenon.

The heart of this lies, the article reports, in how Indian authors are now able to write mass-market fiction, offering readers their own takes on the classic epic narratives of Hindu literature, the Ramayana and the Mahabharata. In doing this, they’re creating their own personal take on these stories of heroes and gods, wars and quests, as a way of “unlocking the crowd-pleasing genres of mystery, fantasy, and historical romance.”

The article positions these new approaches to ancient myth as helpful in transforming publishing in a country with rapidly increasing literacy rates, and what’s reported to be a “growing appetite” for print as well as ebooks.

From the article (for which, in The Economist’s tradition, no byline is provided):

Chiki Sarkar, who we’ve covered as the founder of Juggernaut Books, tells The Economist that the growth of large bookstore chains with their ability to promote new titles, means that “big books are becoming bigger.”

She adds, “Into this landscape you’ve now got an old genre that has found new vitality.”

Ashok Banker, a one-time literary novelist, is credited with launching this revival of mythology in 2003 with Prince of Adohya, which led to an eight-volume Ramayana series, and a subsequent screenplay deal with Disney India.

Novelist Ashwin Sanghi has co-written two novels with James Patterson but in India is still best known for his mythologically based fiction. He tells The Economist:

“Frankly, what is happening now is not something new. It’s simply a continuation of an age-old tradition. What makes it new is the language of choice–English.”

Sanghi says he also believes that India’s lack of “home-grown English-language bestsellers” in the past has been a “condescending attitude of Indian publishers.” It was following the success of such novels as Chetan Bhagat‘s 2004 Five Point Someone: What Not to Do at ITT  that things changed, green-lighting Indian imprints to produce “indigenous page-turners” for consumers.

But the question remains a good one: why should younger, contemporary authors in India turn, as The Economist asks it, “with such relish to the distant storytelling past?” From the article:

“Mr Sanghi argues that this group grasps the tools of ‘effective communication’ but ‘does not carry the burden of a literary legacy.’ Unlike literary-fiction writers, they feel ‘free to experiment. Moreover, they know how to sell and are not afraid to involve themselves in marketing and distribution.”

As Sarkar is quoted saying: “The epics have always been in fashion.”

Here’s the full story at The Economist.