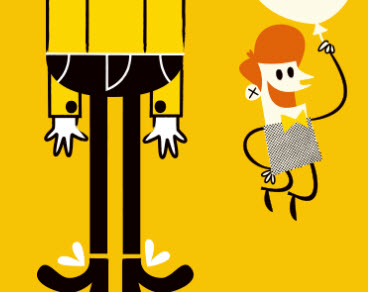 In association with the International Information Content Industry Association (ICIA), Frankfurt Book Fair has announced the inception of a Global Illustration Award (GIA), to be conferred October 20 in Frankfurt.

Entries must be made by August 14 at IlluSalon, where categories listed are Cover Illustration, Children’s Book Illustration, Editorial Illustration, Scientific Illustration, and Theme Illustration. An overall topic for this year’s inaugural competition is “Learning To Live Together,” and organizers say in a prepared statement that the program is meant “to encourage the creativity of illustrations worldwide, build a bridge of collaboration for the content industry, and set new trends for it.”

From a prize fund of €30,000, the first-prize winner is to receive €10,000, and the competition is open to all illustrators, regardless of genre, subject area, or medium, including ebooks.

A longlist is scheduled to be announced in early September, yielding later to a shortlist.

The prize jury of industry experts in illustration, art, publishing, and media for the 2016 award comprises:

The autumn’s shortlist is to name 15 candidates, all of whom will have the opportunity to have their works featured on the GIA website and get promoted across the ICIA and Frankfurt Book Fair’s significant industry networks. “In today’s visually dominated world, illustration and design are of increasing value and particular importance in the process of creating a book.

“The Global Illustration Award is a unique award, taking into consideration all forms of illustration, regardless of genre, subject matter and medium.

“As the Frankfurt Book Fair has always been an important meeting point for designers and illustrators, we are delighted that together with our partner this new prize has been initiated and will be awarded for the first time at this year’s Frankfurt Book Fair.”

A statement also is provided from IlluSalon founder Minglian Hou. Hou is quoted as saying:

“After a year’s worth of planning and preparation, the long-awaited Global Illustration Awards have finally arrived.

“Covering all varieties of illustrations, the significance of these awards, in terms of value and the effect on the global content industry—and the publishing industry in particular—is quite clear.

“Indeed, these awards will be a grand occasion for the illustration industry.”

ICIA, is described as an international, apolitical, nonprofit organization based in Hong Kong, “advocating the protection and maintenance of the rights and interests of the content industry in light of new technology,” according to Frankfurt’s statement.