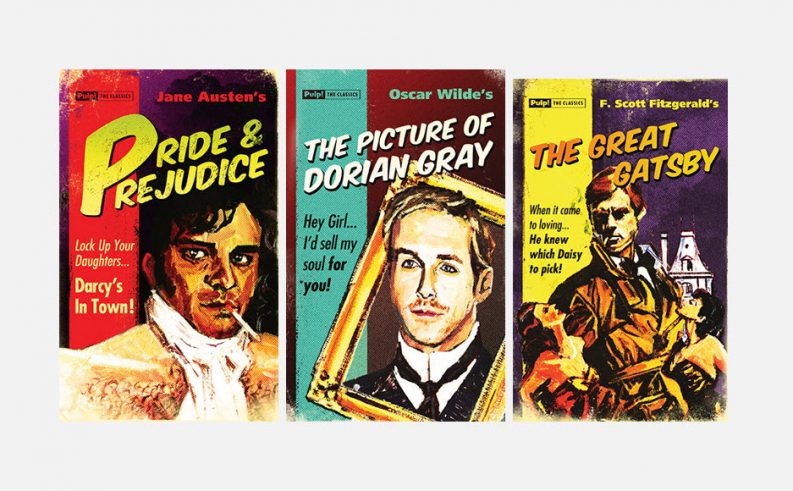 The problem facing publishers of classics is how to market them in ways that catch the attention of today’s audiences. How do you create covers and a marketing strategy that stands out?

The answer for the UK’s Pulp! The Classics, an imprint of Oldcastle Books Group, is a “pulpification” of the masters, in hopes of attracting a contemporary readership.

Here’s how the company positions some well-known titles with cover art and descriptions. “There’s a sinister man about London town with something of the night about him.

“Mr Hyde is mad, bad and has a penchant for bumping off MPs and other kindly innocents. Will his friend Dr Jekyll be able to stop him? Or is there something more to their relationship than meets the eye…?

“Only the intrepid Utterson can get to the bottom of this mystery, but what will he find in Dr Jekyll’s lab?” “Tess is just a humble milkmaid when the local landowner has his wicked way.

“Her new beau, the smarmy Angel Clare, is none too pleased when he finds out she’s already been deflowered.

“Bloody revenge of course, and an ending to touch the hardest of hearts. “Here’s looking at you… Cathy

While redesigned, the imprint’s releases use the original unabridged text from some of the most enduring books.

David Mann, the illustrator responsible for the cover art, studied illustration at the Cambridge School of Art. Book design is by Elsa Mathern, who has contributed book designs for several imprints in the Oldcastle Books group.

As Blogcritics has written about the series: It’s a cool concept…it does more than add some clever new covers to beloved books; it irreverently challenges the way we view classics.”

In an email exchange with the company’s Alejandra Creixell, Publishing Perspectives learned more.

Publishing Perspectives: How did the company/idea get started?

David Mann: “Ion Mills, MD and founder of Oldcastle Books, mentioned in a meeting that he thought it would be great to do pulp versions of the classics. Everyone was immediately enthusiastic about it, but wanted to avoid denigrating great literature. Therefore, it was decided that Oldcastle’s pulp imprint would be designed to appeal to audiences who might perceive texts by Austen and Hardy as stuffy whilst using the original unabridged version to continue appealing to existing fans of classic novels and avoid debasing the actual text.”

PP: What have been your most successful titles?

PP: How are the copy and cover written and designed?

DM: “All the titles follow the same process: after deciding which title to ‘pulp’, the team discusses what they want the cover to look like, more or less. Then, David Mann hand-paints the pictures from a photograph and scan the final outcome. The scanned image is sent to Elsa Mathern who also designs the covers of some of our other titles. The blurb shout -ines and copy are done by Alexandra Bolton, a previous Oldcastle Books employee, but the text itself is the original unabridged version of the classical work.”