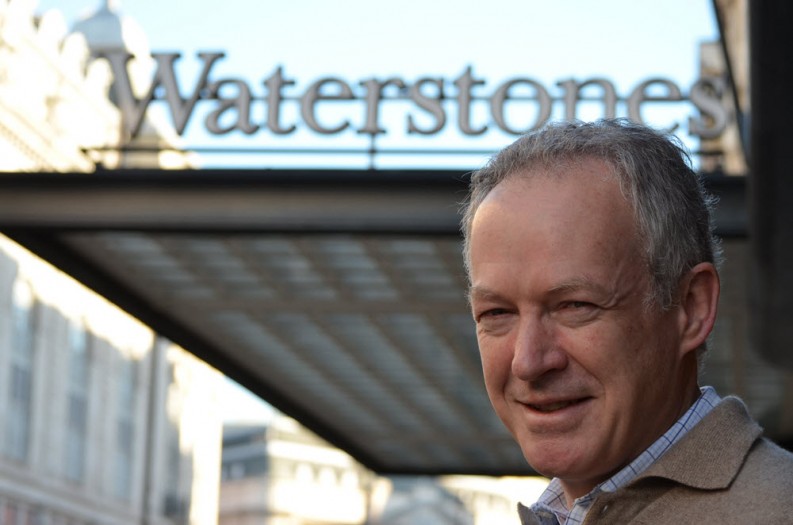 From Brexit (no) to bookstore social space (yes) Waterstones’ James Daunt is certain: He wants ‘to sell more books.’ He’ll be in conversation with Faber & Faber’s Stephen Page at London Book Fair’s Quantum Conference on April 11. ‘If Amazon Were To Open Physical Bookshops’

If the UK votes to leave the European Union this summer, it could make it easier for Amazon to open a chain of bookstores in the country—and that would “wipe us out”, says Waterstones Managing Director James Daunt.

He spoke to Publishing Perspectives in a wide-ranging interview that included the debate over Europe, the design of the chain’s new Tottenham Court Road store in central London and the differences between the UK and US book markets. As ever, Daunt came across as a devoted book enthusiast, passionate about physical bookselling and determined to continue the turnaround of the UK’s leading specialist book chain (though he would balk at that last word):

“If Amazon were to open physical bookshops, clearly that would be the end of us—you’d have to hope the competition people would come to our aid.  Please God, let’s stay in Europe—for a million reasons, and that’s one of them.”

As the debate rages nationally over whether the UK should leave Europe (it is dubbed “Brexit”) and Prime Minister David Cameron tours the country to persuade the British public to vote to remain in the EU in this June’s referendum, Daunt put his concern this way:

“If you are within Europe, then the European competition guys have a voice and a say, and they may look rather askance at an individual company losing an enormous amount of money in order to push out its only other competitor. If you’re not in Europe, then it’s a matter for the UK authorities. Who would you place your trust in?”

But some in the UK take a cynical view of Europe and Brussels’ engagement. They don’t place their trust in them and are rather fed up with the EU. But Daunt isn’t one of them. “Not me, and particularly not vis-a-vis the competition authorities. “I wouldn’t want to go to the DTI [Department of Trade and Industry] and knock on the door and expect to have any kind of a sympathetic hearing, because we don’t worry about that in this country generally speaking.

“Most of the anti-competitive action is taken on a European level for things that affect this country, rather than a national level.

“Amazon is considerably constrained in terms of Europe in a way it has never been here. It’s not part of our makeup.”

This is to raise interesting questions over free markets versus intervention.  Does Daunt think—counter-intuitively—that the UK is in fact more a free market than the US?

“Well, if you look at the specifics of the book market—where is it the most competitive? Where has the lowest average selling price in the world?  Is it the US or the UK? It’s the UK.”

Yet the US has a reputation for being wary of intervention—anything that smacks of the state is viewed with suspicion. But Daunt says it puts into place more measures of protection than the UK. A ‘Student of Bookshops’

“We’ve been through a pretty savage, cost-cutting exercise. At some point you have to stop doing that.”James Daunt

Daunt says he has reasons to feel positive right now, not least a feeling that, on balance, the cost of entry with regard to property would stop Amazon from taking the retail plunge here.

His new Tottenham Court Road store, with its emphasis on creating “social space” that encourages people to linger, has been warmly received by publishers and consumers. It occupies an awkwardly shaped site that included a small underground car park. It has been converted to a large bookselling space that incorporates a bar and pop-up cinema. Books replacing cars: what could be better? Daunt describes himself as a “student of bookshops” and happily admits that he has borrowed from the Feltrinelli Red stores in Italy for elements of the design. It is all about clear sight lines, as much face-out as possible, and bare tables for people to bring their laptops and work.

But he won’t say this is a template for the future, and he loathes the word.

“I pray to God that the word template is never used in my hearing. I shout at people who use that. That is indeed what a multiple retailer always wants to do which is create a template. Retailers want to create templates, they want things to be the same. And I absolutely don’t. I want to approach each shop individually.” The basement of the Tottenham Court Road Waterstones was a carpark before the renovation. Image: Roger Tagholm

‘I Want To Sell More Books’

“We have lost 35 percent of our staff…If we’re going to make more money, we have to sell more books.”James Daunt

Twenty years ago, Waterstones stores were all about sight lines blocked by floor to ceiling, dark wood, library-shelving. They were very heavily stocked shops, which were as much about spine-out as face-out. They felt heavy and academic back then, whereas today they feel light and nimble. Daunt is keen on display within the shops, keen on face-outs, on not having two titles with similar covers next to each other.  It’s an artistic approach as much as anything—he likes visual contrast, energy, fluidity, a flexible approach to space. It’s an interesting change.

Noel Murphy, Sales and Marketing Director at Yale University Press in the UK—who used to work for Waterstones in the 1990s—says, “They had a heavier atmosphere then, which worked in certain areas, but the world has changed. It’s all about attention span and lightness of touch now. They are delivering results and we have a clear idea of what they want to do.”

Essentially, Daunt may be midway through turning the company around. He has the publishers on side and has said that he needs to improve profitability by another £10m to £15, before it can stand on its own two feet, independent of its wealthy Russian Owner Alexander Mamut. The obvious question is: how?  His answer is simple.

“I want to sell more books. We’ve been through a pretty savage, cost-cutting exercise. At some point you have to stop doing that.  We have lost 35 percent of our staff—now that’s quite a lot given that we have the same number of shops.  We really have put the screw on. Now, there are bits around the edges that we can continue to do, but it’s around the edges. If we’re going to make more money, we have to sell more books. Can we sell more books?  Yes, and we can do so through a combination of organic growth—do it better within our shops, and I think there really is a lot of potential there—but we can also expand; we can open up new shops and we’re demonstrating that we can do that very profitably.”

As if to prove the latter, he takes out his phone and scrolls through reams of figures to find the previous day’s takings in the newly refurbished Birmingham store. “We were 98.9 percent up on the same day last year. Now, admittedly we have closed a store there, but we had Foyles open, so I am encouraged by that.” “This Café Nero we are sitting in takes a lot more in revenue than our ebook sales do.”James Daunt

Waterstones has plans to open around 10 new stores this year, and that “lightness of touch” means they will include “related product” or “non-book” items to a degree–stationery, toys, gift items. Daunt makes no apologies about this.

“The simple mission is how do you make yourself a better bookshop by having that–’a better book shop? And I think you do.”

But he concedes that there’s “a natural percentage of sales which, if you breach, you’re likely to run into problems. And I think that depends on where you are and what sort of bookshop you are.

“I think it is a massive problem for some of our international peers. I think they’ve destroyed their shops—Barnes & Noble is one of them. Most of them have got significant problems and every single one of them does it by plan-o-gram. Here are the scented candles, they go third aisle in, facing whatever. You can’t do it like that well. I think we’ve massively increased our RP sales and I think we’ve made our shops better in doing that.”

On digital, he says the chain never had an official contract with Amazon to sell Kindle, nor that such an agreement ended on a particular day.

“It was more a case that it just fizzled out, he says. “As sales dropped below a level, we stopped selling them. We had fewer and fewer shops doing it, and eventually somebody noticed.  And they went: ‘Oh, it’s over’. And it wasn’t really, it was just contracting. We stopped being an effective place in which to sell Kindle e readers—I don’t think that many sell anymore.”

Why does he think that trend is?

“I think that tablets now are a much more effective and universal thing. You’re really not going to have two devices. I don’t think it’s the end of e-reading. I think there has been an adjustment back from e-reading, but I think the e-reader as a standalone dedicated device has probably had its time.”

Waterstones does list ebooks on its website, but you have to hunt to find them.  Daunt smiles. “Yes, and you have to have a device that is not tied to anybody else’s ecosystem. You won’t buy an ebook for a Kindle with us—you can’t do that—but should you be the proud owner of a Sony e-reading circa 19-whatever it is, you can buy one from us. And there are three-and-a-half people out there who do.

“This Café Nero we are sitting in takes a lot more in revenue than our ebook sales do.” It is very hard to find publishers to say anything negative about the current Waterstones, which hasn’t always been the case.

At Profile, Managing Director Andrew Franklin is effusive in his praise.  “It’s a miraculous turnaround story,” he says, “worthy of the Harvard Business Review. Everyone was convinced that Waterstones was a basket case and that publishers would have to find another way of selling physical books on the high street, just as they will in the US if Barnes & Noble goes under. They have no shortage of good ideas.

“It just shows what is possible when you have booksellers running bookshops, and publishers running publishers.”

We should finish with books.

Daunt is currently reading Ian McGuire’s novel about an ill-fated whaling expedition The North Water (Scribner). “It’s one of those ones that you want to wake up at 5.30 in the morning so you can read some more,” he says. “And I loved The End of Vandalism (Old Street) by Tom Drury.  That was recommended by one of our booksellers and is hilarious.”

It’s a small point, but he knew the publishers of both. In many ways, Daunt is still the shop-floor bookseller he was when he opened Daunt Books for Travellers (now Daunt Books) back in 1990.

And for that, he has a lot of respect.

More details on the Quantum Conference (#Quantum16) at London Book Fair in which James Daunt will speak to Faber’s Stephen Page.