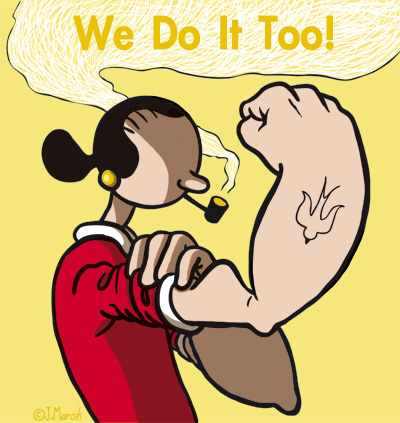 When the list of nominees for the 2016 Grand Prix d’Angoulême was published on January 5th, not one woman was among the thirty names. The lifetime achievement award, one of the most prestigious in the comic book sector is not only a great honor for the recipient, it also has obvious financial consequences.

A storm had been brewing in the comic book world for some time now, and the creation last spring of a website by a collective of 100 women called Female comic book creators against sexism was an indication of what members say has been a long-time problem. Members include Marjane Satrapi and Florence Cestac, the only female comic book author ever to have received the Grand Prix d’Angoulême. The collective called for authors voting for the list to boycott it. But what really got the media’s attention was when graphic novelist Riad Sattouf, known internationally for his Arab of the Future series, decided to remove his name from the list of nominees in order to leave room for women authors. Being nominated made him very happy, said Sattouf, “…But it turns out that this list includes only men. This bothers me because there are many great artists who deserve to be there. I would rather leave my place to, for example, Rumiko Takashi, Julie Doucet, Anouk Ricard, Marjane Satrapi, Catherine Meurisse (I’m not going to list all the people that I like eh!) … I therefore request be removed from this list, hoping to be reinstated when it will be more communal! ”

“We will expand the list so as to include women. We have to get together to discuss the names, it is not a question of adding women because they are women but because they have talent. Adding ten women would be ridiculous, one has to take into account the number of women amidst the general group of authors. We do not intend to use affirmative action, particularly not in the fields of art and culture.”

Since Riad Sattouf’s declaration, eight other cartoon artists have asked to be removed from the list including Joan Sfar, Daniel Clowes, Brian Bendis, Chris Ware and Bill Sienkiewicz.

Update, January 9: Following the accusations of sexism concerning the list of nominees for the Angoulême Grand Prix, according to Le Monde newspaper, Festival organizers added six women to the list of 30 nominees: Lynda Barry, Julie Doucet, Moto Hagio, Marjane Satrapi, Posy Simmonds and Chantal Montellier. The names remained on the Festival’s site for several minutes before being removed. Later in the day Festival organizers decided that there would no longer be a list of nominees–all those who vote will be free to choose the comic book artist of their choice. It remains unclear how the final choice will be made.