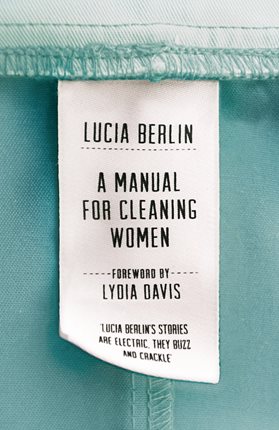 Picador designer Justine Anweiler wrote about how she went about creating the cover for the UK edition of Lucia Berlin’s novel, A Manual for Cleaning Women. The “rediscovery” of Lucia Berlin, through her recently published (and highly acclaimed) A Manual for Cleaning Women: Selected Stories, has been one of the biggest publishing stories of the summer.

And while it is true that one can’t judge a book by its cover, it is interesting (and informative) to look at the process of designing the cover. At Picador, Justine Anweiler wrote about how she went about creating the cover for the UK edition.

“Having seen the American cover [on the left] and feeling incredibly daunted by the task of creating something as show-stopping as theirs, I got down to designing the physical label to be properly produced. Although I wasn’t sure how a clothing tag would work on a cover — the finished thing could look like what it is and fall completely flat — I thought the concept was strong and I was excited to do something a bit different in the day-to-day of a designer. My favourite part of being a cover designer is collaborating with talented individuals who don’t work on books covers regularly or ever at all.

“Once the concept and preliminary design was signed off and approved at the cover meeting I picked up the phone and started conversations with bespoke label makers in England. We decided to go ahead with proofing four different labels from two different companies – from there we found a clear winner. …and the UK edition.

“In addition, I found and ordered up a professional housekeeping uniform and got ironing and stitch ripping. With the uniform prepped and the label in our hands, we commissioned Jonathan Simpson and started photographing.

“I had a vague idea of what I wanted for the spine, flaps, and back, but it wasn’t until the images came through from the photographer that the full jacket started to come together. I had always wanted the front to be a clothing tag in a vacant uniform that juxtaposed the warmth of a woman wearing it. When the photos of me wearing the uniform, straight on and buttoned up (the back) and side sleeve shots (the flaps) worked compositionally, I was absolutely elated.”