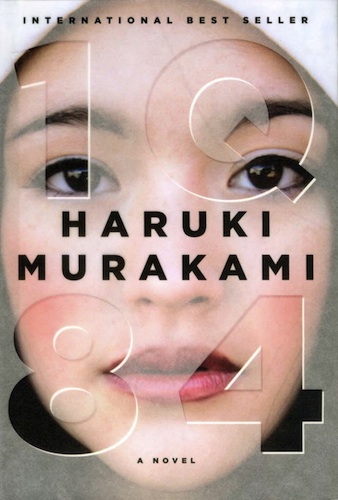 It’s time…as our group read of Haruki Murakami, A Wild Murakami Chase continues, we’re ready to start our assault on his big one…the 1157 page (in paperback) 3 volumes (in its original format) 1Q84.

The basic story is simple: a pair of soul mates, Kawana Tengo and Aomame Masami, are separated at the age of ten and then reunited as adults twenty-five years later.

But of course, there’s more to the novel than that. Much much more. It’s a love story, a mystery, and a knowingly dystopian look at Orwell. It’s about writing and math, the art of assassination, religious cults and the “little people,” Sibelius and Janacek and two moons and alternate worlds and, perhaps most importantly, the power of love.

As Charles Baxter wrote in his review in The New York Review of Books:

The whole of 1Q84 is closer to comedy than to tragedy, but it is a deeply obsessive book, and one of its obsessions is Macbeth and the problem of undoings. After saying that Banquo is dead and cannot come out of his grave, Lady Macbeth in Act Five observes that “what’s done cannot be undone.” Then she leaves the stage for the last time. What the two major characters in 1Q84 desire above all else is to undo Wonderland and to get out of it and back to each other, but “gears that have turned forward never turn back,” a phrase that is repeated with variations three times in the novel, as if the problem of a snowball narrative had to do with how to melt the snowball and escape the glittering and thrilling world that Unrealism has created. 1Q84 seems to be about the undoing of a curse, so that the characters who believe that “the original world no longer exists” can somehow get back to that original world they no longer believe in. In a somewhat startling form of humanism and faith, Tengo and Aomame come to believe that what has been done can be undone.

That they do so by means of loyalty, prayers, and love is the most touching element of this book, and for some readers it will be the most questionable. Aomame, the novel’s assassin, repeats to herself a prayer that Murakami quotes several times. This prayer is the novel’s purest article of faith:

O Lord in Heaven, may Thy name be praised in utmost purity for ever and ever, and may Thy kingdom come to us. Please forgive our many sins, and bestow Thy blessings upon our humble pathways. Amen.

I finished 1Q84 feeling that its spiritual project was heroic and beautiful, that its central conflict involved a pitched battle between realism and unrealism (while being scrupulously fair to both sides), and that, in our own somewhat unreal times, younger readers, unlike me, would have no trouble at all believing in the existence of Little People and replicants. What they may have trouble with is the novel’s absolute faith in the transformative power of love.

It’s an extraordinary work. I hope you’ll join us.

Enter into the conversation here.