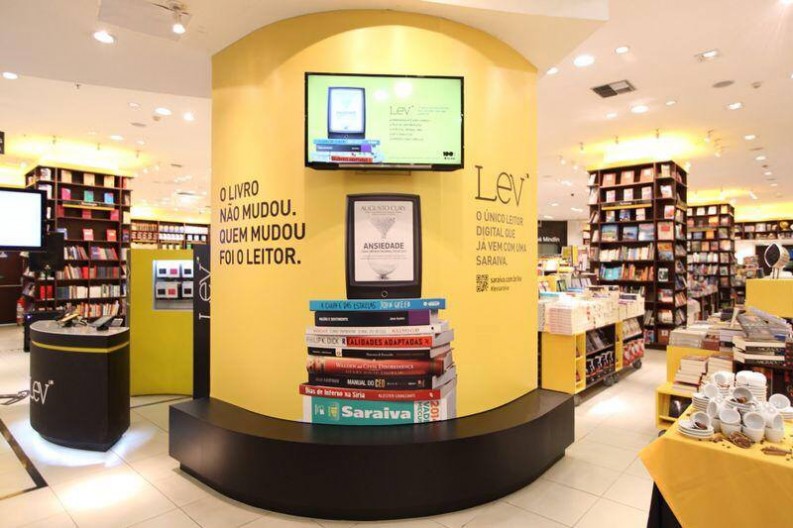 LEV is being distributed at Saraiva’s 114 stores, as well as through Wal-Mart in Brazil.

Brazil’s Saraiva is making a bet few others would in this era of the tablet: earlier this month they launched the LEV, a proprietary-branded e-ink reader. The device, which is a rebranded white-label device from France’s Bookeen, is being positioned by the company to compete directly with Amazon’s Kindle, which has taken significant market-share in Brazil since launching last year. Currently, Saraiva — which is the dominant bookstore chain in the country — sits in third or fourth position in ebook sales, among competitors which include Amazon, Google, Apple and Kobo.

Taking a page from Apple, Saraiva took pains to ensure a splashy-launch, hosting journalists in Sao Paolo at a conference where the company’s recently-installed CEO Michel Levy took the stage to make the presentation. The reader retails for 299 reais (US$132) and comes with a selection of free books and four current front-list titles from partner publishers.

Speaking to Publishing Perspectives a day after the launch, Levy was optimistic that the e-ink reader was the right move for Brazil’s dominant bookseller at this time: “We have many markets in different stages of evolution, in Brazil the market for ebooks in general is still nascent and for that reason we think LEV is right for Brazilians right now. When the market start starts you can position or reposition yourself when there is a disruption, — that is what we are doing.We believe the e-reader has not been put out fully out in the marketplace, in the segment of the market which is growing, and we have an opportunity.”

A proprietary survey of Saraiva’s customers revealed that some 70% of consumers had yet been exposed to an e-reader. Of those, 87% of replied that they are interested in learning and potentially buying an e-reader. “If you look at this as the largest book reseller in the country, we have good chance to be successful,” said Levy.

“The reading experience on the e-reader is unique and there is a lot of value there for the reader. We think there is a strong advantage.”

Levy notes that ebook sales growth is still incremental, but he believes if LEV can reposition the company as forward thinking and they can grow ebook sales beyond the current market-share of just 3-4%, the LEV will prove a success.