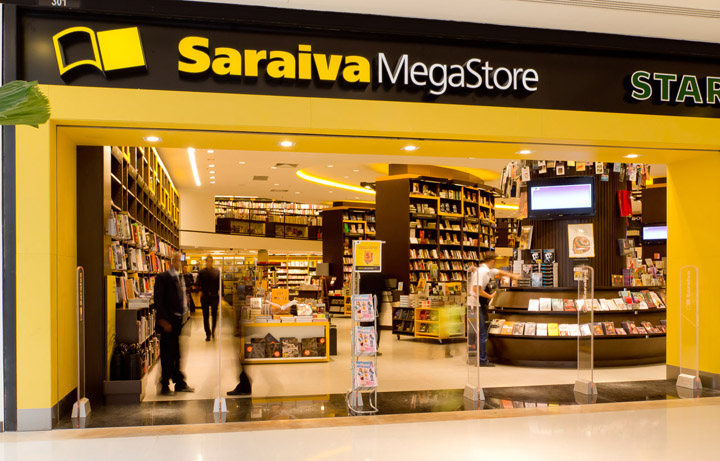 Brazil’s Saraiva has brought in a new tech-savvy CEO who is integrating retail and publishing operations while exploring options in education and tech.

Saraiva is both a publisher and the dominant bookstore chain in Brazil. If it were the United States, think Barnes & Noble; if it were the UK, think Waterstones. The company operates 114 stores, has 60 million customers visiting its stores annually (9 million of whom are Saraiva preferred members). In 2013, revenue from sales topped $2.1 billion (USD) and it now employs 3,500 people. Among it’s more recent hires is Michel Levy, the firm’s new CEO. Michel Levy, is the new tech savvy CEO of Saraiva

Levy came to Saraiva from Microsoft and, unsurprisingly, says that “technology is at the core of all of Saraiva’s business. We believe we are in the business of producing and distributing content, services and technology, in any format, for any platform, anytime and anywhere.”

Earlier this month, Levy led the launch of the LEV, Saraiva’s proprietary ebook platform and e-ink reader — bold move made to stave off the encroachment of Amazon, which launched the Kindle in Brazil last year and is moving into physical book distribution.

That said, the most significant move of Levy’s tenure has nothing to do with technology, but more with pragmatism: he has brought the publishing and bookselling sides of Sariava together, after years in which the two sides were in such fierce opposition that it was said you would never find a Saraiva book in a Saraiva bookstore. “In April we integrated the warehouses that fulfill for retailing and publishing, and today you might even be able to find a few Saraiva books in Saraiva bookstores,” he says with a wink.

Publishing as a Profit Center

The publishing arm remains the true profit center for the company, which produces a wide range of titles and is a leader in textbooks for K-12, technology courses, higher education, law books and legal test prep — where they hold 40% of the market. With textbooks, the Brazilian government remains a key customer, accounting for 25% of the firm’s K-12 sales and 50% of its sales for higher education.

Returning to the theme of technology, Levy is keen to underscore that when Saraiva talks about publishing, it’s really talking about “content creation.”

“Being a publisher is a small part of what we are in the sense of content. We are an aggregator.” As such, the company is diversifying its publishing arm and is moving into new areas, including long-distance learning and games. “It is a chance for us to increase our relationship with the customer and take advantage of our relationships with higher education institutions and upsell them.”

This is where the online and physical retail network of Saraiva stores becomes central to the long-term strategic growth of the firm. Same-store comparable sales have grown at a rate of 10-11% per year and the company is now expanding into airports to take advantage of a growing middle class that is traveling more within the country.

To fuel further expansion, the firm has just taken a loan of 628 million Brazilian reis (US$279 million) from the Brazilian Development Bank, the biggest single loan in the company’s history. Some 700 new employees are expected to be added to Saraiva’s payroll in the next few years.

Inevitably, much of the future of the company appears to boomerang back to education, which is a booming business, with the number of students enrolled in vocational and private higher education growing exponentially year-on-year. Reaching these students, many of whom are in far-flung corners of the country, is a challenge. “Distribution is very expensive,” notes Levy, “so what we are now doing is dedicating sales reps to service the universities and working to bring professors into our stores. We now have nine branches where universities can use our stores as a support base.”

700 new jobs will be added in the next few years.

Of course, they always have online ordering as an option as well. “But I don’t see physical as being independent from the virtual and we are moving fast on integration,” says Levy.

In addition, Levy says Saraiva has set aside a fund of money to invest in startups and new technologies, ones they can adapt to provide new tools to the education market. “We want to be a full service provider and we deliver solutions to the companies that deliver education.”

Asked how a Brazilian consumer should view Saraiva today, Levy replies, “There is the perception that Saraiva is only a bookstore, and that the other a company that publishes books. But we are a lot more than this. We are in the retailing business, both virtual and physical. We are in content creation, preparation, distribution for K-12, vocational and higher education books. We are in technology and adaptive learning. We sell to individuals and business. We are both the content provider and the platform. We are a one-stop-shop. We are evolving That is what Saraiva is today.”