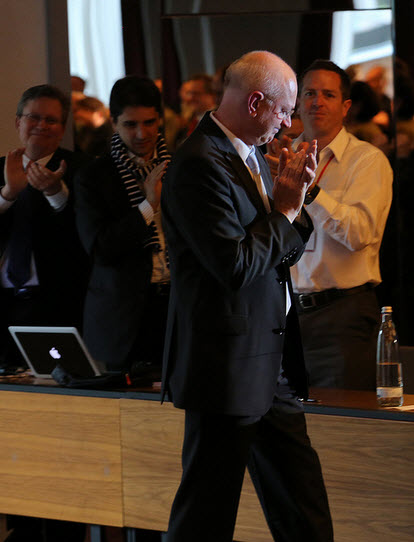 “If we have a sense of creativity,” Helmut von Berg tells Klopotek’s Publishers’ Forum in his closing address, “then we have a future.”

No #EtherIssue Convo This Week

Because of travel conflicts this week, we’ll forgo our usual weekly #EtherIssue live discussion. Our usual schedule is an Issues on the Ether story Tuesday, and a live conversation on Twitter on Wednesday.

BERLIN, Germany — For “ten years I have been in charge of this conference,” Helmut von Berg told the Publishers’ Forum assembly here Tuesday evening. “And I wondered what changed in that time.” The director of Klopotek, the publishing software company, von Berg paused with the timing that comes of a decade’s practice at conference-closing speeches.

Then: “I had no immediate answer to that…I found it quite difficult to say what really has changed. If we’re talking about disruption, we need to name it, be concrete, to say what it is, this disruption.”

Von Berg, in the final minutes of what he announced would be his last year at the event’s helm, spoke with a candor and a zeal that had been reflected in much of the two-day conference. The very able Dr. Rüdiger Wischenbart will succeed von Berg in the leadership of Publishers’ Forum

“As I thought about that,”  Berg said, “I came to the idea to talk about metamorphoses of publishing.”

In a quick quasi-historical riff, von Berg singled out two key intentions of content which — over the millennia — would become what we know as literature today. “Stories to stimulate men or make them feel guilty for misbehaving,” von Berg said, might be the beginning of “publishing,” in the broadest sense.

Over time, he told us, however, the purpose of the impulse to publish, to make public such storytelling, morphed into more entertainment-driven forms and guises, until today, perhaps publishing’s purpose is “to ensure discoverability…and usefulness…in a [post-] gatekeeper universe…of content.”

So simple a brief, an outsider might think, shouldn’t be difficult. But, of course, Publishers’ Forum, like so many other springtime events, exists to grapple with the actual strain and stress of what turns out to be a very tall order. “We see the diminishing role of the gatekeeper,” von Berg said, “as it parallels the need for the editorial force to prove its value.”

This includes, he pointed out, the arrival of an author like Hugh Howey, who was with us here at the conference, as someone “who doesn’t need a publisher, and is here talking to us about that.”

In a short list of “do’s and don’t’s,” von Berg placed at the top: “Do embrace change…There is no alternative to embracing change.”

“The Kinds of Books We, as Publishers, Don’t Enjoy Publishing”

And, of course, the ever-articulate Howey:

“In 2012 in the US, one out of 20 books sold was a Fifty Shades of Grey book,” the author told the plenary session. “That’s a stunning number…Romance impacts our traditional industry as well as self-publishing. Hugh Howey speaks at Klopotek’s Publishers’ Forum: “Look at the demand from the readers.” Image: Klopotek

“What we see in publishing,” Howey went on, “is unmet demand from traditional publishers. If I was a traditional publishing house and I looked at a science-fiction bestseller list on Amazon, eight of the Top 10 and 70 percent of the Top 100 would be self-published books. That means people want to read a lot more of the kinds of books that we, as publishers, don’t enjoy publishing. Because we don’t like reading them.

“And I’m speaking for myself, as well,” Howey said. “I mostly read non-fiction and literary fiction. I don’t read a lot of genre fiction. But if I were a publisher and if I were a bookseller, I would lean toward the things that I liked. And business would be bad if I only did that. It might not be enjoyable, but if we want to stay in business, maximize profits, and afford to do the things we love on the side, we should look at the demand from the readers.”

And if publishers don’t “look at demand from readers,” as Howey suggested?

“Most of you will think of digital as a sideline until you are a sideline.” That was one of the  tough lines from Baldur Bjarnason, whose presentation, “Bridging the Gap – What if eBooks Aren’t an Option for Your Customers?” tended to assume that the Publishers’ Forum audience needed a push — or a swift kick.

“The worst thing you can do is stand still and pretend that the world isn’t changing,” Bjarnason told them. “Customers are leaving you.”

Echoing von Berg’s urgent call for the publishers to “embrace change,” Bjarnason told them, “If you don’t change, you will fail. And most of you will fail. In ten years, most important publishers will be gone.”

Bjarnason called authors “the poor labor class of the industry,” unappreciated properly by the publishing houses.

“I think most publishers will disappear over the next decade or two,” he said. “They will disappear into the bowels of the corporations…and they will deserve it…The reason Amazon is beating the hell out of you is that they know what they are doing, and you do not.”

“I Want You to Embrace Fan Fiction”

If anything, the orderly, warm welcome of the Klopotek organization’s production of the conference belied a worried tone of concern and pressure from the stage.

Publishing Perspectives‘ Edward Nawotka — in the session, “What Self-Publishing Teaches Publishers” with Howey and me near the closing of the conference — shared with the audience some of the numbers that Smashwords’ Mark Coker has offered on his self-publishing platform.

“In five years, Smashwords has published 83,700 authors,” Nawotka told them. The output of those writers, he said, comprises 276,000 books. And they’ve published 10 billion words.”

“Fan fiction has…developed a collaborative infrastructure that publishers could learn from.” Brian O’Leary

Before the magnitude of the trend in the States was discussed in Nawotka’s and my session with Howey, publishing consultant Brian O’Leary had specified 12 cautionary points of guidance in his talk, “An Architecture of Collaboration.” In a point on leveraging the data-rich potential of digital books, O’Leary told the Forum:

Selling content on the web provides publishers with an opportunity to look outward and gather information on what readers actually do with the content they buy. A book that is never opened, or one that is opened but barely read, should be the source of significant concern, as its lack of value erodes demand for other work.

And he, like Howey, pressed the publishing community of Germany to learn from the US experience in moving past what might be a natural comfort zone. Fan fiction, he told them, holds real promise for publishers who study it.

Within publishing, these writers represent the kind of “prosumer” audience that has broadened the market for things like digital cameras, home theater and more. Online, there is a “flood of amateur collaboration” we can embrace and benefit from.

Fan fiction has also developed a collaborative infrastructure that publishers could learn from. It includes early-stage or “beta” reviewers, a well-understood approach to releasing and refining works in progress, and sincere engagement around reviews of published work. This is already taking place on a massive scale – millions of such works exist, some of extraordinary length. Delegates to Klopotek’s Publishers’ Forum work on a task in a workshop session. Dr. Rüdiger Wischenbart, who will lead the conference starting in 2015, is second from left. Image: Klopotek

The sweep of von Berg’s tenth Publishers’ Forum probably answered this gracious organizer’s “what has changed?” quandary with many questions, not one answer.

“I worry whether too many male readers will stare moronically at a…TV series,” Bloomsbury’s Newton told the audience.

“You are no longer the boss. You are one of a team. Your job is to enable your team to come together.” Helmut von Berg

“The orthodoxies of our business have to be challenged,” Yale’s Bennett said. “Why are we doing it like this?”

“There are no standards in technology,” de Gruyter’s Fund said. “Creation of content struggles to be Priority One.”

And while cultural distinctions, market sizes, and commercial traditions were continually noted, accounted for, and accommodated, the arc of the program was understandable to anyone working in publishing today.

As the outgoing von Berg put it, the business exigencies into which we pour so much attention and contention these days — the spreadsheets — cannot be mistaken for the core criterion: creativity. No one must be allowed, he told the publishers, “to narrow your thinking and your ability to be creative and make suggestions for what to do.

“Don’t kill creativity with figures,” he said, adding — an echo of the conference commentary from Bloomsbury’s Richard Charkin — “don’t create digital ghettos. We should not understand digital as something different from what we did traditionally. It is one process.

“We have a universe of content, but we are not back to the roots,” von Berg said, of publishing’s history in his panoply of metamorphoses, when those stories to stimulate men or make them feel guilty were all.

“You are no longer the boss,” von Berg said to the executives listening to him. “You are one of a team. Your job is to enable your team to come together…being able to fail. That is a challenge.

“And if we have a sense of creativity,” von Berg told the group in the final minutes of the conference, “then we have a future. If we don’t, I’m afraid, we wouldn’t have a future.”
Back to Table of Contents