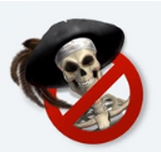 Ebook piracy in Russia is a notorious problem. In 2012, the market nearly doubled, but piracy remained pandemic. Now, we are reporting that again, the market has nearly doubled for 2013 and looks to hit some 500 million rubles (USD$16.12 million).

Could the problem of piracy be on the wane?

Last year we reported that, according to representatives of Eksmo, Russia’s largest publishing house, up to 95%% of all downloads of ebooks are pirate copies, something at results in the annual losses to the industry of 4 billion rubles (USD$120 million).

The problem got so bad that Rospechat, the state agency that regulates mass media, launched a media campaign to encourage readers to buy legal ebooks, as reported by Russia Beyond the Headlines, and is now regularly monitoring websites guilty of offering pirated books, removing some 25,000 links.

Alas, as the argument goes “piracy is the result of unmet demand.” Last year Andrei Yurchenko, a senior analyst at Pro-books magazine, one of Russia’s leading publishing trade magazines, told Publishing Perspectives pirated sites remain popular in Russia due tolack of any real competition from companies that distribute legal content: it is estimated that between 100,000-110,000 titles are available in pirated editions, compared to just 60,000 available legally.

“The current situation with pirated content in the Russian e-book market could be explained by the lack of legal alternatives in terms of service, product range and prices,” says Yurchenko. ”Once such alternatives will be available, it should go a long way toward solving the problem.

Is the ebook sales growth indeed a result of more and more legitimate publishers are making books available at accessible prices. In just one example, Bookmate.ru — a company that initially encouraged users to upload their own (likely pirated) scans to their service, is looking to partner with traditional publishers in the hopes of expanding their market.

It’s unlikely that the problem of piracy has been solved, but it might just be on the wane. At the very least publishers can take heart that at the very least the booming sales are an auspicious sign and they might now fully commit with confidence to catering to this demanding market for ebooks.