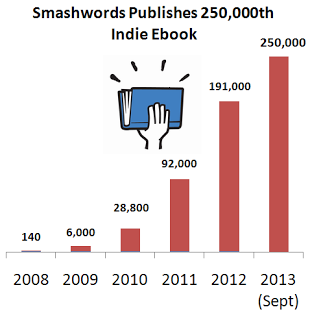 “Writers have learned that with ebook self-publishing, they can enjoy faster time-to-market, greater creative control and 4-5 times higher royalty percentages,” Coker writes. “The higher royalty rate enables indie authors to price lower while still earning more per ebook sold. This gives indies a significant competitive advantage over traditionally published authors. When readers are given the choice between two books of equal quality, and one is $3.00 and the other is $12.99, the $3.99 title is more desirable. The $3.99 indie earns about $2.50 for every book sold, whereas the $12.99 author earns $1.60 to $2.25”

In fact, according to Smashword’s survey data, a book priced at $3.99 will sell more than four times as many copies as a book priced over $10.00. This pricing power, Coker argues, is what gives indies a huge advantage in building their platform. Which means that authors who “reach the most readers today will have the largest fan bases ten years from now.”

In his post, Coker also asks, “I wonder if the traditional publishing industry has yet come to terms with the ramifications of the rise of indie authorship.”

In additional Smashwords news, they announced today that they’ve reached a distribution agreement with Oyster, the new ebook subscription service that offers consumers unlimited access to more than 100,000 ebooks for $9.95 per month.

As Coker said in his post, “I still feel like we’re getting started at Smashwords. Wait until we reach 500,000 books, or one million. Our amazing authors have barely scratched the surface of what’s possible.” Watch, you’ll see.”