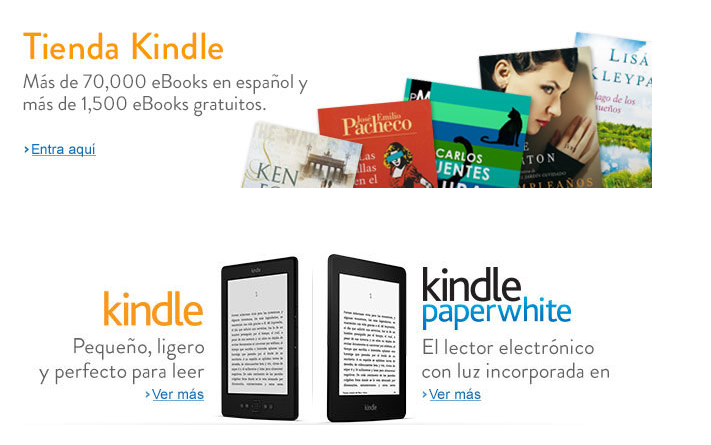 This time last year Librerías Gandhi — which has more than 25 bookstores and 30% marketshare in Mexico — announced ambitious plans launch a pan-American Spanish-language ebookstore. Now it looks like they’ve bowed to the powers-that-be and have entered into a retail distribution partnership with Amazon, agreeing to sell Kindles, following the opening of Amazon’s Kindle bookstore in Mexico this week. Currently, the devices are available only in Gandhi retail outlets or via Amazon’s US site.

The move puts Amazon in direct competition with Gandhi’s own devices and ebookstore, which offers 30,000+ titles.

Amazon is offering 2 million titles, of which 70,000 are in Spanish, all priced in pesos. In addition, the company is expanding its KDP self-publishing service.

“The vast majority of Mexicans do not have access to a bookstore in their town, so we’re happy to launch the Mexico Kindle Store today and bring a huge bookstore with over 2 million titles to anyone with an Internet connection,” said Pedro Huerta, director of Kindle Content, Latin America.

Unfortunately, the issue isn’t necessarily just a lack of access to bookstores. Mexico, with a population of 115 million, is the largest single Spanish-speaking market in the world. Yet eMarketer estimates that internet adoption hit just 40.5% in Mexico in 2012, for a total of 46.6 million users. The rate is significantly lower than the average for Latin America as a whole.

That said, the government is pushing forward legislation that would classify internet access as a “social right,” likely significantly expanding access.

How Ebooks Can Bridge Borders in Latin America