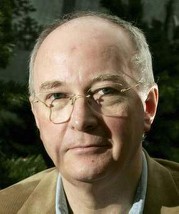 The Guardian reports that His Dark Materials author Philip Pullman, who will be taking over the presidency from PD James of the Society of Authors in August, is leading a call for writers to be “paid fairly” when their eBooks are borrowed from libraries.

According to Alison Flood, in the UK, although authors are paid by the government when their physical books are borrowed (around 6p per loan); digital titles are not yet a part of that agreement. And in addition, the Society has learned that publishers themselves may be “inadvertently” underpaying authors for eBooks loans, meaning that “they may be losing up to two-thirds of the income they would have received on the sale and loan of a physical book.”

Pullman is quoted as saying, “New media and new forms of buying and lending are all very interesting, for all kinds of reasons, but one principle remains unchanged: authors must be paid fairly for their work. Any arrangement that doesn’t acknowledge that principle is a bad one, and needs to be changed. That is our whole argument.”

Anne Sebba, a biographer and chair of the Society’s management committee agreed with Pullman, making clear that although authors “are keen to embrace the opportunities offered by digital publishing and want to support libraries by offering their ebooks for lending,” at the same they “need to ensure that authors are paid sufficient money from digital [formats] to enable to keep them writing.”

Flood explains that what this all means is that the Society is calling on the government to bring ebooks into the “Public Lending Right fold,” which means their loans from libraries would be paid “without delay,” and that the failure to do so is “patently unjust.”

The Society is also calling on publishers to look more closely at contracts, believing that they “may be mistakenly underpaying authors on library loans of ebooks,” while urging both authors and their agents to read their royalty statements carefully and to demand reimbursement (plus interest) if they discover that any mistakes have been made.

In a statement, the Society made clear that they have “become increasingly concerned that the rhetoric of publishers (and sometimes government) about remuneration for authors from [digital lending] is not matched by practice. In particular the society is concerned that current and proposed models may leave authors with a far smaller share of remuneration from the loan of an eBook than they currently obtain from the loan of a physical book.”

Many publishers in the UK work with aggregators such as OverDrive to make their ebooks available to the public. And according to the Society, over half a million ebooks were lent through British libraries via OverDrive in the first 10 months of 2012.

Writing in The Telegraph, Christopher Williams adds that, “In absence of a Government scheme [the Society] is now arguing that, under their contracts, publishers are in fact selling OverDrive and others a licence to lend e-books, rather than making a simple sale. This would mean the authors’ share of revenue would rise from typically 25pc to typically 50pc.”

“It seem that you have been using the wrong basis for remunerating authors on licences of e-books for library use,” wrote Nicola Solomon, chief executive of the Society of Authors, in a letter to publishers.

She said authors aimed to work with publishers to find a mutually acceptable solution without the need for court action.