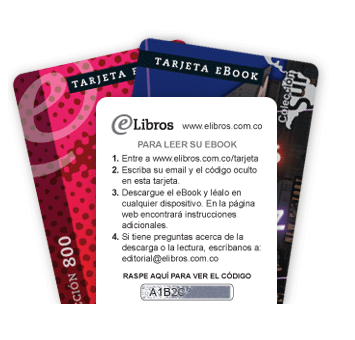 BOGOTA: When Colombian publisher Iván Correa attended the Bogota International Book Fair earlier this year, he brought all his titles, some 30 in all, packed in just a small backpack. The owner of E-Libros, a two-year-old publishing startup, Correa was helped by an innovative yet astoundingly simple tool: the tarjeta e-libro or ebook card.

“One of our key concerns from the beginning was how to reach readers,” says Correa. “The obvious place to go first was to the online stores, so we signed up with Apple, Amazon, Kobo, Leer and Barnes & Noble. But as ebook only publishers we realized that we needed to invest in marketing if we wanted readers to find our books. So we asked ourselves: ‘where do Colombian readers go to buy books?’ They go to a bricks-and-mortar bookshop. What should we do then to sell our ebooks to these readers? The answer was the ebook card. A printed book publisher sends his books to a bookshop to gain exposure. If we are digital-only, we should follow their lead and take a step back to the physical medium in order to sell our digital content to Colombian readers.”

About the size of a credit card, the ebook card bears the cover of an E-Libros title and a unique ID. The reader purchases the card, logs in to the E-Libros website, types in the ID and is asked to create a personal account. Upon registration the reader may download the title up to three times in either EPUB, Mobi or PDF format. Currently the ebook cards are available at 15 retail locations throughout Colombia, but Correa hopes to expand distribution at home and abroad.

Well versed in print publishing, Correa had worked in the textbook department at Colombian publisher Editorial Norma before setting up his own graphic and editorial design business. He launched E-Libros, the country’s first digital publishing house, in 2011.

Correa argues that the ebook card addresses specific challenges of Colombia’s market: low levels of credit and debit card use, distrust in online retail, and undergraduate students who have a penchant for seeking bargains and are interested in digital reading.

And E-Libros has been approached by local publishers interested in also utilizing E-Libros’ ebook card scheme: “We are currently working with a software company on creating an ebook download platform for print book publishers who want to digitalize their catalogues and use ebook cards for their titles. The idea is that we provide ebook conversion and ebook card creation services for our clients, leaving them in charge of the cards’ distribution while we store the digital files in our platform. We won’t hold any rights over their content, we will only provide the platform. The way I see it, it will be a blend between Amazon and our current ebook download platform. We hope to launch it very soon.”

Ebooks in the Latin American Context E-libros’ ebook cards are available to purchase at bookstores nationwide.

Although ebooks have been available since the turn of the millennium, it took until 2011 for ebooks to make an impact on non-English-speaking markets, writes Austrian publishing consultant Rudiger Wischenbart in his latest report on global ebook markets. Wischenbart is clear to point out that among the factors playing a key role in the development of ebook markets are the rise of mobile phone subscriptions and digital networks, an increase in the number of educational publishers opening new offices around the world, the rise in educational aspirations among those in developing markets, and the surge of local publishers aiming at niche target groups.

But these factors are largely applicable to the book business in North America, Europe and Asia, Wischenbart argues. Across the Arab world, Sub-Saharan Africa and Latin America, limits on distribution and shipping have hindered the development of a consolidated book trade network. In the case of Latin America, many bookstores have found a means to offer ebooks, and several major overseas aggregators, from Spain’s Publidisa to the recent launch of Apple´s iBookstore in Latin America, demonstrates that the market exists for ebooks, however nascent it may be.

While the continent has been progressively building the technological infrastructure necessary to allow citizens to embrace high speed connectivity and computer usage, Octavio Kulesz´s research on digital publishing in developing countries notes that one of the biggest obstacles to ereading in Latin American is the high price of imported e-readers and tablets. Kulesz points out that Kindles and iPads tend to be accessible only to wealthier readers.  This limited market has hindered major investment from local publishers in big e-publishing and digitization efforts. And since there are currently no continent-wide, detailed studies on Latin American ebook consumption (with the exception of CERLALC, which has started to publish some figures), publishers have no clear knowledge of local ebook markets. Apple, too, is promising some data, as it now allows publishers to track ebook downloads by country, genres and titles. E-Libros’ current catalogue is made up of Latin American literature titles with an emphasis on Colombian authors. It comprises four key collections: Colección 800 covers poetry and novels in the public domain; Colección Sur showcases the work of contemporary authors such as Rodrigo Parra, Lina María Pérez and Javier Correa; Lang, covers English translations of contemporary Latin American fiction authors; and Coedición delivers fiction and non-fiction published in co-editions (for the moment limited to a partnership with Laguna Libros).

All books are offered free of DRM. “The cost of implementing DRM is very high and we cannot afford spending thousands of dollars a year while trying to recoup our costs at the early stage,” explains Correa. “What is the use of fighting against a copy protection system for a format that is already vulnerable? Had these embedded DRM, anyone malicious enough could download them and somehow find the way to break the protection.”

Of course, this had to be explained to the authors, who had to be made aware of the possibility of piracy. “None of them complained. In the end we know that print publishers face the same problem with photocopiers,” he says.

What’s Next for E-Libros?

In its brief history E-Libros can already boast of finding itself part of the established publishing community. It is a member of the Colombian Book Chamber and was featured on the Independence Route of the Bogota International Book Fair; a subsidy from Proexport Colombia helped E-Libros attend the Guadalajara Book Fair in 2012.

The company is focused on publishing literature but is looking at moving into academic and children’s publishing, one of the fastest growing segments in Latin America.

Correa is also currently working on a partnership with Bogota’s Cultural Office (Idartes) to digitalize and distribute all 84 titles of Libro al Viento, an ambitious, decade-long public reading campaign that has given away some 300,000 books to commuters and in public spaces. (The campaign encourages readers to pass along the book once they have finished it.)  For Correa, the fact that these ebooks are downloaded for free (for the moment only in Colombia due to copyright) means data collected from the project would also allow him to ascertain a wider picture of digital reading in Colombia.

Despite these short-term successes, Correa believes that Colombian readers and the government need to upgrade their digital literacy. He wanted, for example, to donate titles to local libraries — something that would offer him tax exemptions — but was prevented from doing so after being informed that libraries “didn’t have the technological infrastructure” to display digital books.

Still, he argues, the main obstacle in the country is psychological rather than technological. “Almost everyone has access today to a computer and so they can read ebooks,” he says, “but I have met people with iPads who have never tried to use their iPad as a reading device.”