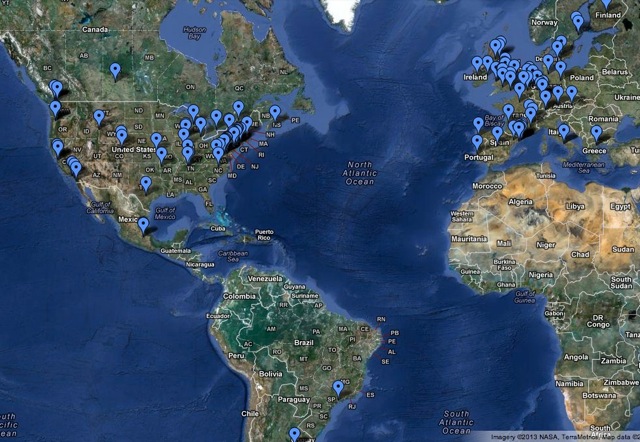 A map of where Liz Castro has distributed copies of “What’s Up with Catalonia” based on contributor recommendations.

I’m a control freak. I have worked alone for more than 20 years, and each time that I’ve tried to collaborate with other people, I’ve promised myself to never do it again. I like to work alone partly because I have a very clear idea of what I want the finished product to look like, and partly because I can get very manic about details. I care about every space and every apostrophe.

But as I was working on my latest project—a collection of 35 essays on the Catalan independence movement called What’s Up with Catalonia? — I was more aware than ever that though I could translate, edit, layout, and even produce the digital and print versions of the book myself, I couldn’t get it out there, into the hands of potential readers, without a lot of help. For better or worse, Catalan independence has a very niche audience. Though I believe there are lots of people interested, well, they either might not know it until after a trip to Barcelona—the third most popular destination in Europe—or they might not think of looking for the book even if they do. I read about Amanda Palmer’s phenomenal success with her last crowdfunding campaign and it struck me like someone discovering a religious text for the first time. I have been gradually drifting away from my prior publisher (beloved as they were) as I find I can do more and more of the process myself. I’m a fervent believer in Jeffrey Zeldman’s call to “own your own content.” So while the million dollars Palmer raised caught my eye, it was the way she described the interactions with her community that really attracted me. Because while I am holed away alone in my office in the middle of nowhere, I am thoroughly indebted to and dependent on my connections on Twitter, Facebook, and through my blogs — for learning my trade, for political awareness, and also for support and encouragement. I just had never thought to do a project with “my people.”

The truth is that I needed crowdfunding more for the crowd than for the funding. The articles for the book were written by professors, linguists, and political leaders, with a promise from me of royalties but no advance. I was able to bootstrap my own time (a solid couple of months, truth be told) and the minimal upfront expenses with my own savings.

“The truth is that I needed crowdfunding more for the crowd than for the funding.”

But my book posed a unique problem in terms of crowdfunding: the people who might be willing to sponsor the book — Catalans who wanted their story told — were not the target audience for the book. Americans, Brits, and other people outside of Catalonia with only a cursory idea of what was going on there, 13 million of whom visit Catalonia every year were the target.

Accordingly, It didn’t make any sense to do a US-based Kickstarter campaign. While I think Americans will be interested in the book — 750,000 visit Catalonia ever year — I couldn’t say the topic was very urgent to them. Catalans, on the other hand, are anxious to get out the word about their independence movement, and up to now haven’t had a good vehicle to communicate this to the world. So, I signed up at a Catalan crowdfunding site called Verkami and structured the crowdfunding campaign to focus not on raising money, but on raising awareness about the book abroad. I made it clear that our objective—that of my potential sponsors and me—was not merely to create the book or make it exist, but rather to get the book into the hands of as many people outside Catalonia as we could. My goal was to raise enough money to send 500 copies of the book to libraries, magazines, and political leaders all over the world. And thus, the rewards consisted of the typical copy of the book for the sponsor, but much more importantly, one or more books sent to the recipients of the sponsor’s choice.

Almost 600 people signed up and pledged about $15,000. I was astounded. And the mostly Catalan sponsors sent me hundreds of addresses and contacts all over the world, from New Zealand to Argentina, from California to New York City who might be interested in the book. The buzz about the crowdfunding campaign got the book into major newspapers in Barcelona and there was a standing-room crowd at the presentation in Barcelona.

The book so far has sold surprisingly well in Catalonia, much better than for comparable collections of essays—and right off the charts if you take into account the fact that it is an English book of essays in a mostly non-English speaking country.

But the results are still out in the rest of the world. Sales on Amazon, Barnes & Noble, and Apple have been much better than for my previous Catalonia-related works, which I think must be attributed to the buzz generated by the crowdfunding campaign. But with just under four hundred copies sold so far outside of Catalonia (about 4:1 in favor of print), I’m still nowhere near done.

I have found two major roadblocks. First, sending books to libraries is much more complicated than I anticipated: libraries have limited shelf space and are not always open to unsolicited books. I am trying various strategies, from sending out promotional mailings to networking among librarian friends to see if anyone can connect me with the right person in their library.

So, I have had to scramble to get reviews. Some review publications, while they won’t review anything that has already been published, will let a publisher pay to have their book reviewed even after it’s on paper. Recently, I received a very fair, and I should say, very positive review from Kirkus Reviews which I hope will encourage the interest of some libraries and bookstores. But I am still waiting to hear from other prominent reviewers.

They say that The Great Gatsby was not an instant success and that Fitzgerald sold fewer than 24,000 copies in his lifetime. Five years after his death, the US Military distributed 150,000 free copies to service members and the book has never been out of print since. Crowdfunding on two continents has enabled me to begin my own much more modest distribution and promotion. I’m hoping it has the same catalyzing effect.

You can read more about Liz Castro’s work on her website.