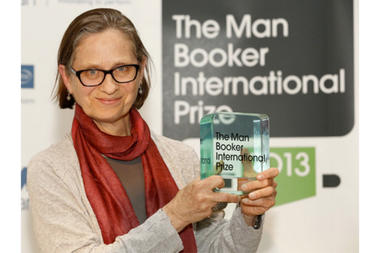 The judges of the Man Booker International Prize have done what recent Nobel Prize committees have refused to  do: honor an American for “achievement in fiction on the world stage.”

The chair of the judging panel, Sir Christopher Ricks, praised her work during the ceremony, stating:

“Lydia Davis’ writings fling their lithe arms wide to embrace many a kind,” Ricks said. “Just how to categorize them? Should we simply concur with the official title and dub them stories? Or perhaps miniatures? Anecdotes? Essays? Jokes? Parables? Fables? Texts? Aphorisms, or even apophthegms? Prayers, or perhaps wisdom literature? Or might we settle for observations? There is vigilance to her stories, and great imaginative attention. Vigilance as how to realize things down to the very word or syllable; vigilance as to everybody’s impure motives and illusions of feeling.”

Davis’ collected short stories were published in 2009 and she’s also a respected translator from the French, with translations of  Proust’s Swann’s Way in 2004 and Flaubert’s Madame Bovary in 2010.