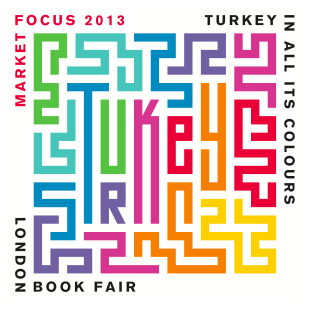 By Olivia Snaje and Edward Nawotka Turkey has a lot invested in this year’s London Book Fair and have a stated goal of securing contracts to have at least 100 titles translated into English. To this end, the country has sponsored dozens of authors to attend and speak at the Fair in what amounts to a vast cultural and professional program.

Turkey’s top literary star at the Fair is not, as you might expect, the Nobel Prize-winner of Orhan Pamuk — who is notably absent — but Elif Shafak. Shafak — who serves as the Fair’s “Author of the Day” today — is, along with Pamuk, perhaps the only other Turkish author to truly command a broad English-speaking readership.

Yet, considering Turkey’s highly professional publishing industry and it’s geographic position at one of the flash points of world affairs, it’s time for this to change.

Turkey’s economy is growing at 3% annually and the publishing sector has grown outstripped this — growing a total of 300% percent in the last decade, according to Münir Üstün of the Turkish Association of Press and Publishing. Book production hit 480 million units in 2012, covering all subjects.

Metin Celal of the Turkish Publishers Association adds that Turkey has 1,790 publishing companies, with and educational publishers and books commanding the largest market share. followed by cultural books, of which 68 million were printed in 2012.

And while questions about censorship are frequently raised in reference to Turkey, the men state on this very fungible point, that Turkey is “no different from anywhere else.”

And at least insofar as one bestseller is concerned — E.L. James’ Fifty Shades of Grey — this is true: the title is number one on the foreign literature list. Elif Shafak is the most widely read female author in Turkey.

Among homegrown authors, bestselling titles include compilations by newspaper columnists, as well as diet and health books, such as Karatay Mutfagi’s, The Karatay Diet.

Of course, finding an audience for a Turkish diet book is likely to be more of a challenge than finding one for Turkish fiction authors, as stories travel more easily than do lifestyle books specific to a culture. Yet, on this point, when it comes to Turkish literature the

biggest obstacle remains a dearth of translators. To remedy this, said Celal, the Turkish government continues to support TEDA, a fund for translation that began in 2008 as part of Turkey’s turn as “Guest of Honor” at the Frankfurt Book Fair that year. So far, the scheme has funded some 1,300 books, of which 800 have already been translated and published — primarily by German and English publishers. More recently, TEDA has funded annual training programs to help establish more translators who want to pursue the profession.

Turkey has seen a 2–2.5% increase in on-line book buying although people still hesitate to pay via credit card on the Internet. Naturally, this too has inhibited the growth of ebook sales, which remain nascent and “still have much room for development.”

Here, once again, the government may have a significant role to play. Two years ago the Ministry of Education has launched the Fatih project, a program to digitize educational materials and transition some 14.5 students from print textbooks to using tablets. Estimates place the cost at some $3–4 billion, initially; so far Apple and Samsung are vying to supply the government with devices.

In summary, a huge demand exists for books in Turkey, something that should be complimented by a growing demand for Turkish literature abroad.

Üstün said there was hope for this and witnessed at a recent book fair where he met 15 translators from countries as diverse as Brazil, Iran or South Korea. All of them spoke Turkish fluently and had all translated Orhan Pamuk.

Of course, interest in Pamuk is just a start. The deepest hope of the Turkish contingent in London that the foreign publishers and translators mine a little deeper because, as almost any Turkish publisher or author will insistently tell you, “Turkish publishing and literature is about far more than Orhan Pamuk.”

Statistics on the Turkish Publishing Market: