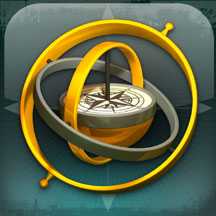 This Tuesday at the London Book Fair Comma Press will be launching what it describes as a “unique interactive iPhone app, designed to make short fiction, work in translation, and new writing accessible to the digital generation.”

The project, developed by Comma Press, Literature Across Frontiers (LAF), and Toru Interactive is called “Gimbal” (the names comes from the gyroscopic mount used for housing old ship compasses). The free interactive app, designed specifically for the iPhone, contains thirty stories set in cities all around the world, and is designed with the commuter in mind, enabling them to escape the tedium of the “everyday” by taking an alternative route, an imaginary one across the face of an unknown city.

Eight of these stories were specifically commissioned for the LAF’s “tramlines residency” project in which authors visited each other’s cities, and the wrote a story based on their experiences exploring those cities on trams. (Among the writers and cities are Roman Simic from Zabrag visiting Manchester and Michelle Green from Manchester visiting Zagreb; Inga Solude from Riga visiting Brussels and Koen Peeters from Brussels visiting Riga; and Eman Abdelhamid from Alexandria visiting Barcelona, and Francesc Seres from Barcelona visiting Alexandria.)

The other 22 stories have been taken from Comma’s own ‘Reading the City’ anthology series. The app will allow the user to select a city and then listen to a reading of the story (either in English or in the original language) while the graphics allow them to follow the story on the city’s map. The user also has the option of simply reading the text, with the interactive route running along on the side.

The official launch will be at the London Book Fair on Tuesday, April 16th at 1:30 p.m. (in the Mall Room at the back of EC2) with readings from Alison Macleod, Michelle Green and Roman Simic. There will be a demonstration of the app after the discussion, at 3:15 pm in the Translation Centre.