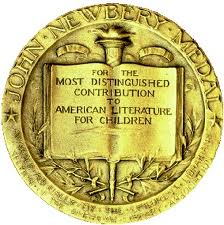 Awards for the top children’s and YA books, videos, and audios, were announced yesterday at the American Library Association’s Midwinter Meeting in Seattle, Washington.

Katherine Applegate was awarded the 2013 Newbery Medal for The One and Only Ivan (Harper). Jon Klassen received the 2013 Randolph Caldecott Medal for This is Not My Hat (Candlewick) which he both wrote and illustrated. (Klassen also received a Caldecott Honor citation for Extra Yarn, with text by Max Barnett (Balzer & Bray/HarperCollins), making him the first artist since 1947 to win both a Caldecott Medal and an Honor citation in the same year — that year, Leonard Weisgard won the Caldecott Medal for The Little Island (Doubleday) written by Margaret Wise Brown using the pseudonym Golden McDonald, and received a Caldecott Honor for Rain Drop Splash (Lothrop, with text by Alvin Tresslet). And Nick Lake won the 2013 Michael L. Printz Award for In Darkness (Bloomsbury). It was the first time that each of the recipients had won the award.

The Laura Ingalls Wilder Award, given to an author or illustrator whose books have made a substantial and lasting contribution to literature for children, was given to Katherine Paterson. (According to Shelf Awareness, there were cries of disbelief from the crowd that Paterson, a two-time Newbery winner had never been honored with the Wilder Award.)

The 2013 Margaret A. Edwards Award for lifetime contribution to writing for young adults was given to Tamora Pierce, and Andrea Davis Pinkney, whose book Hand in Hand:  Ten Black Men Who Changed America, illustrated by Brian Pinkney (Jump at the Son/Hyperion), won the 2013 Coretta Scott King Author Award, was also chosen to deliver the 2014 May Hill Arbuthnot Honor Lecture. Bryan Collier won the Coretta Scott King Illustrator Award for I, Too, Am America, text by Langston Hughes (Simon & Schuster).

The Theodor Seuss Geisel Award for most distinguished beginning reader book went to Up, Tall and High! By Ethan Long (Putnam).

The Mildred L. Batchelder Award for best work of translation went to My Family for the War by Anne C. Voorhoeve, translated from the German by Tammi Reichel (Dial).

The Stonewall Book Award, given to children’s and young adult books of exceptional merit relating to the gay, lesbian, bisexual and transgender experience, was given to Benjamin Alire Saenz for Aristotle and Dante Discover the Secrets of the Universe (Simon & Schuster). Saenz was also awarded the Pura Belpre Author Award, which honors Latino authors, for the same title.

The Robert F. Sibert Award for the most distinguished informational book for children was given to Bomb: The Race to Build — and Steal — the World’s Most Dangerous Weapon by Steven Sheinkin (Roaring Book/Flash Point).

The Odyssey Award for Excellence in Audiobook Production went to Brilliance Audio, producer of The Fault in Our Stars by John Green, narrated by Kate Rudd.

The Andrew Carnegie Medal for excellence in children’s video went to Katja Tomeman for Anna, Emma and the Condors (Green Planet Films).