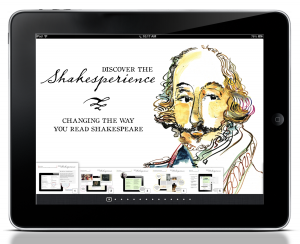 Over the past year, Publishing Perspectives’ The Play’s The Thing has been leading an international audience through a chronological exploration and examination of the plays of William Shakespeare.  (We’re starting our reading of Much Ado About Nothing this week, with the major tragedies still to come.)  And today, with the launch of Sourcebooks’ The Shakesperience, lovers of the Bard (and want-to-be lovers of the Bard) will have an additional tool in their arsenal. Using the features of Apple’s authoring tool, iBooks Author, Sourcebooks had created a series of interactive books that help to make the plays of the world’s greatest playwright even more accessible to modern audiences.

The Shakesperience is launching on the iBookstore with three complete plays: Othello, Hamlet, and Romeo and Juliet, each with a most impressive list of features:

Dominique Raccah, CEO and Publisher at Sourcebooks, said, “We’ve taken what has traditionally been a difficult and generic experience and provided the opportunity for more engaged and lively learning. Experts will love it, but what we’re most excited about is the impact it will have on educators and students.”

Read more about the creation of The Shakesperience here.

Join our online reading group The Play’s The Thing here