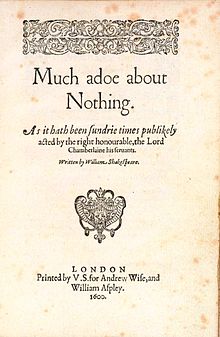 As Publishing Perspectives continues its exploration of the works of William Shakespeare, it’s time for our reading of one the most delightful of all his comedies, Much Ado About Nothing. It’s a play that kicked off a genre, a comedy whose wit and banter and sophistication are the forerunner of Restoration stage comedies, 19th-century comedies of manners, and all the way through to the classic film screwball comedies of the 1930s and 40s such as The Awful Truth, Bringing Up Baby, and The Philadelphia Story.

Critic Tony Tanner says that it is “…perhaps Shakespeare’s perfectly constructed play, ever part in its place, and working so smoothly and easily as to make the whole work seem like a piece of effortless, seamless spontaneity…it’s a Rolls-Royce of a play.” Swinburne claimed that “for absolute power of composition, for faultless balance and blameless rectitude of design, there is unquestionably no creation of his hand that will bear comparison with Much Ado About Nothing.”

In addition to that, it’s a whole lot of fun.  We hope you’ll join us.