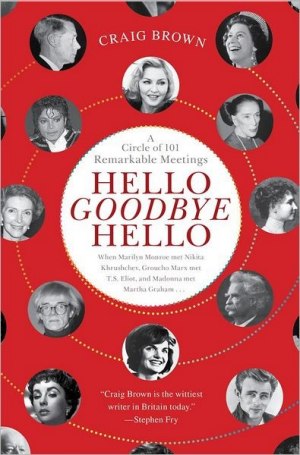 Craig Brown, famous for The Private Eye celebrity diary, columnist for the Daily Mail of London and book critic for Mail on Sunday, is an exceedingly clever and witty man. In his book Hello Goodbye Hello: A Circle of 101 Remarkable Meetings (Simon and Schuster), Brown takes the idea of Six Degrees of Separation (or Six Degrees of Kevin Bacon if you so prefer) and runs with it, telling one fascinating true-life story after another. In Chapter One, Adolph Hitler has a potentially fatal encounter with John Scott-Ellis (aka the 9th Baron Howard de Walden). In Chapter Two, the Baron meets Rudyard Kipling. Kipling, in turn meets Mark Twain. And so on, and so on, until, in Chapter 101, we come back around full circle, as The Duchess of Windsor meets…Adolph Hitler.

Along the way, there are some most surprising encounters. Andy Warhol and Nancy Reagan. Allen Ginsburg and Francis Bacon. Noel Coward and Prince Felix Youssoupoff. Theodore Roosevelt and H.G. Wells. Ford Madox Ford and Oscar Wilde. Salvador Dali and Sigmund Freud. Groucho Marx and T.S. Eliot. Harpo Marx and George Bernard Shaw. J.D. Salinger and Ernest Hemingway. And so on.

While insanely enjoyable and readable, (who wouldn’t be fascinated to learn, for example, that  in their one and only meeting Peggy Lee told Truman Capote about her belief that she had been reincarnated any number of times, “I remember the crucifixion very well…I’ll never forget picking up the Jerusalem Times and seeing the headline Jesus Christ Crucified.”); at the same time the book is structured in such a way that would make Georges Perec and Oulipo proud: 101 meetings described, each in exactly 1001 words, for a grand total of 101,101 words.

But does the structure matter? For me, as with Perec’s Life: A Users Manual, not a bit. What’s fascinating are the stories, by turn gossipy, hilarious and moving, and the connections made: only four meetings to get from Elvis Presley to Rasputin? Who knew! The bottom line is that Hello Goodbye Hello is one of those books that’s going to have you constantly telling your friends, “Wait…you’ve got to hear about this.” It just might be, in the best possible sense of the phrase, the ultimate bathroom reading book.