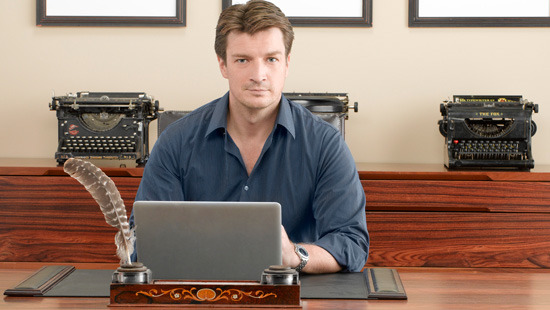 I am a fan of ABC’s TV show Castle and tweet about the show using a ‘Castley’ pseudonym. I ‘fangirl’ with the best of them (English majors, doctors, teachers, film/media people, teenagers, and of course, Fireflyfans). What has become increasingly interesting to me as I’ve watched the show and followed fans on Twitter over the past year or two is the way the show crosses the usual boundaries of fandoms, age groups, media types and genres, with reading being central to it all. Much has been written about the dearth and death of reading, and I became fascinated with how a show about a crime writer and his muse seemed to be encouraging the show’s fans, and many younger fans, to read long-form narrative, a form some might not have read otherwise, if they read books at all.

It is all very meta. On the one hand, there are the very successful, high profile, official tie-in ‘Nikki Heat’ novels by ‘Richard Castle’ complete with a cover photo of Nathan Fillion as Richard Castle, published by Hyperion. On the other hand, there is ‘fanfic’, fan-written fiction that flies under the radar and lives on the web. As I became engrossed in the show last year, I kept seeing references to ‘fanfic’ on my Castle Twitter timeline and decided to take a look. Expecting the worst (and believe me, the worst is there too), I was delighted to find not only ‘OK’ writers, but truly excellent writers, such as the fabulous ‘chezchuckles’ (it took me a while to get the Edith Wharton reference).

Fanfiction sits at the margins of mainstream creative endeavour, and interrogates established views of what it means to be a writer; the meaning of intellectual property, creativity, originality, ‘ownership;’ and traditional boundaries surrounding these concepts, as well as the whole vexed issue of international rights. As a publishing person and daughter of an artist, I have an uneasy relationship with how fanfiction steps on these well-established fences, particularly with regards to the fanfiction based on novels, rather than TV or films. (The latter seems more ‘legitimate,’ but that might just be justification for my own interest.)

In many ways, fanfiction is, and has been for many years, ahead of its time in terms of its embrace of the possibilities and potential of digital technology, of community and niche interests, its very questioning of established domains of knowledge and ‘right/s,’ and its acknowledgement of the role reading plays in writing. As Saul Bellow said, “A writer is a reader moved to emulation.” The leaching of boundaries described above is exemplified by the infinite trail of hyperlinks on the web (Derrida anyone?). It is therefore apt that fanfiction should exist online, and make use of the technology that allows deferment of meaning and certainty; a metaphorical and literal leaking of content from the container (c.f. Brian O’Leary’s ‘Context First, Revisited’).

Fanfiction as an alternate publishing model

Fanfiction as digital Text also embodies a paradox: it harks back to the days of Dickens in the way it is written and ‘published,’ and it shows a potential path for mainstream trade digital publishing.

The longer fanfics are serialised, with the popular ones being updated every day or so. Many chapters end on true cliff-hangers; and readers are included in the writing process. Writers include disclaimers about copyright ownership and many write author notes at the beginning and end of each chapter (many of which are very entertaining in themselves). The writers invite their readers to review each chapter and sometimes even to suggest pointers for the narrative arc. ‘Beta’ readers, who qualify for the role by being experienced fanfiction writers themselves, edit the chapters before they are posted. An incredible community is built around the stories, and Tumblr and Twitter are alive with cross blogging, reviews, and accolades for favourite writers. The popularity of individual stories or writers largely depends on discovery provided by the web through reader recommendations, both on the fanfiction sites and on social media. Once a year or so, readers vote on the best fanfiction in a number of categories, and there are curated lists of recommendations too. And disclaimers are included at the beginning of each chapter, with many being very entertaining.

And the fans read and read.

Fanfiction shows that the web need not be just a technology for making or distributing books (e-books and print), or for social marketing, but a home, distribution and communication technology for long-form narrative content itself. Fanfiction and its fans take the web seriously; it is the default mode, not an afterthought. The online platform means that readers can be based anywhere in the world and are defined by their interest in the particular fandom and genre, rather than by their own geographical or political location. Might is not right in this environment. The idea that someone might limit the right to read a fanfiction to a particular region or country would be regarded as ludicrous and tantamount to abusive behaviour towards readers. There is a lesson here too for publishers.

In publishing today, we can no longer rely on selling individual products that may or may not succeed. Fanfiction suggests another way: a model based on the web, based on the ideals/ideas of community, which encourages readers to interact with authors, editors, designers, perhaps where they can contribute photographs and advertise wares (if related to the story), etc. The online presence also means that publishers have tools such as Google Analytics available, providing real-time statistics of engagement and traffic. A subscription model allows publishers to get early revenue for the author (and themselves) and early marketing too. Tweeting each day about the latest chapter is also a way of marketing the book beyond the subscribers themselves.

So as well as being a serious fan of Castle and its fanfiction, the ‘mechanics’ of fanfiction interests me as it meshes with my interest in web technology and digital publishing. And of course, I love good writing. After having read a few stories by ‘chezchuckles’ last year, I wrote to her to ask if she had written any of her own material, and it turns out that Laura Bontrager, an unassuming school library assistant (I just knew she had read widely) from Memphis, Tennessee, had indeed written an original, unpublished romance. Laura was willing to improvise with us (Say Books) in an online ‘fanfiction model’ for her novel and we were delighted. We decided to make the first chapter of Fences publicly available on the web (fences1saybooks.pressbooks.com) with subscription instructions at the end of it. We let subscribers decide how much they wanted to pay upfront for online access to the rest of the chapters which were uploaded daily, with readers who paid more than $5 getting the ebook at the end. Over 80% of our subscribers paid at least $5. We used Pressbooks™, started by Hugh McGuire, because it is a simple, web-based book production platform with some of the features I was looking for (including a commenting system, the ability to create a working e-commerce model, and the production of valid EPUBS).

The other advantage of the fanfiction web-based publishing model is that one can look outwards to the world and not be limited by location. We are a publisher from New Zealand; use technology from Canada; have an author in Tennessee, USA, (and soon others from elsewhere); and have subscribers from all around the world, including Mexico, the Ukraine, France, the UK, Canada, Australia, and the USA. It is a wonderful thing to be part of.

And returning to fanfiction itself, it can be seen as free marketing for the original content; for instance it has been acknowledged by the writers and cast of Castle that fan power, particularly on Twitter, played a huge role in getting ABC to retain the series after its modest first season (a fifth season has recently been confirmed). So perhaps we should be more accepting of fanfiction and its authors who are often brilliant, witty, intelligent, and very literate, and who in the Castle fanfiction world at least, write with admiration for and acknowledgement of the ‘original’ creators.

Yes, much of fanfiction revolves around romance and ‘M-rated’ stories (and there’s a whole book to be written about that). However, focusing only on the subject matter and traditional boundary issues obscures what fanfiction has to offer us as publishers: a model for community engagement, online interaction between readers, writers and publishers, and a new way of thinking about and doing business.

DISCUSS: Is Fanfiction a “Legitimate” Genre?