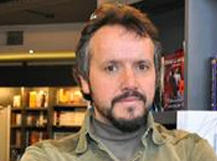 Three winners of the EU Prize for for Literature gathered together at a panel last month at Book World Pragueto speak about the award, the difficulties of getting their work translated, and the role of agents.

The three writers were Bulgaria’s Kalin Terziiski, Romania’s Răzvan Rădulescu, and the Czech Republic’s Tomáš Zmeškal. While all three writers acknowledged that winning the prize was a good thing (which, besides the publicity, comes with €5,000) they were quick to point out how limited the effect was in terms of bringing their work to a wider audience. Răzvan Rădulescu said he survives financially by writing screenplays and unfortunately not through writing literature. Asked whether winning the prize changed anything for him he said there was a bubble of interest for a few months after receiving the award and not much more.

Tomáš Zmeškal pointed out that the prize is important primarily for publishers. “For two or three years I’ve had an agent so I had contact with foreign publishers and had foreign publishing deals before the award, but another five after the award.”

Are Translators More Useful Than Agents?

The award winners then brought a very different perspective on what a writer from a smaller country has to go through to get his or her work translated and published into a language of a larger country. The US and UK literary worlds are known for the powerful position of agents in connecting writers and publishers. When a blog like Michael Orthofer’s Literary Saloon mentions literary agents it is to bemoan their role as middlemen (and middlewomen), whose power and influence has very little to do with literary qualities. It was interesting to hear these writers give their own take on the usefullness of agents, with the exception of Kalin Terziiski, who rejoined the discussion by saying “Bulgaria doesn’t have agents…I am a single warrior, I am my own PR manager and literary agent — a very single warrior.”

Rădulescu explained why the process is not as simple as it seems: “If I want to be published in Germany I won’t go to a publisher but to a translator, who will then prepare a sample and take it to a publisher.”

Zmeškal echoed these sentiments, saying that sometimes he’s been approached by an editor from a publishing house and sometimes by a translator. The problem he stressed is one of time management. “You have to choose whether to do your next literary work or do the necessary marketing.”

The whole process is further complicated by the fact that grants from the, in this case Czech, Ministry of Culture can only be applied for after you have a publisher prepared to bring out the work. And this is where the role of an agent is so vital, Zmeškal said, because no one from the Ministry of Culture will go out to test the waters with international publishers and there’s no time for a writer to go around to publishers at the Frankfurt Book Fair and gauge their interest, not to mention seeing whether their schedule permits them to publish the book this year or the following year.

English Is the Key

Zmeškal went on to say that unless a writer is translated into one of the big languages – English, French, German, Spanish – then it becomes very hard to get translated into the smaller languages because those publishers are waiting for the kind of validation that comes with being published in a big market.

The difficulty of getting translated into English clearly tops the list of big markets. At that point Alexandra Büchler, director of Literature Across Frontiers, outlined some of the specific features of the English-language literary world that keeps the number of translations so low. Exoticism isn’t enough for a publisher to put out a writer from Eastern Europe because it can be provided by an English-language writer from a Commonwealth country such as India, she said, adding that countries like the UK and US have long been used to exporting their culture to a welcoming world. She also stressed that the amount of work before, during and after a translation is something a writer shouldn’t have to take the time for.

Some other translation issues that came up revolved around the jury who chooses the winning writers that will then go on to have their work translated into other European languages. “The jury shouldn’t be from the writer’s home country because they have to know the market they are translating to,” Rădulescu said, adding that an international jury would require translations of the work of every writer applying for the prize.

Zmeškal closed the disussion by pointing out the imbalance between translators to and from larger languages. “To be translated into English there are only four or five translators at the highest level, while there is no problem being translated to Czech.”

DISCUSS: For Foreign Writers, Are Translators More Useful Than Agents?