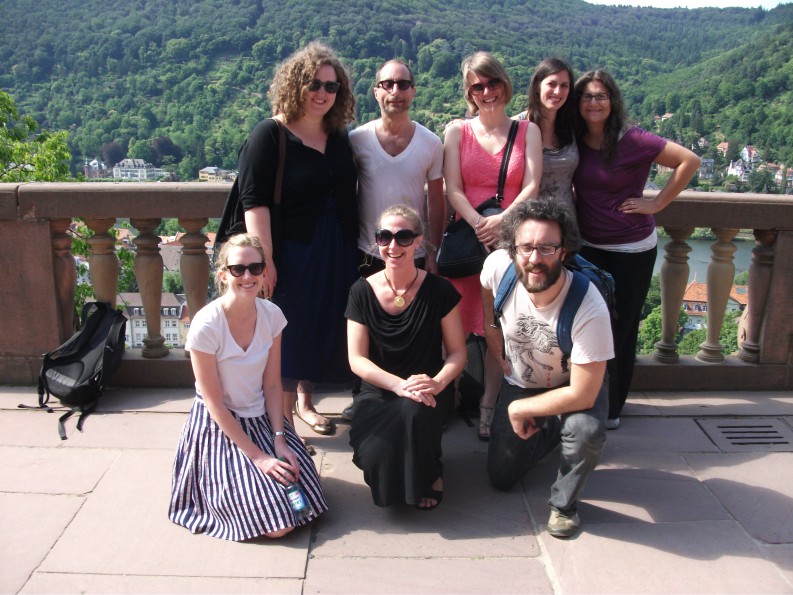 A declining number of bookstores, a booming YA market and a mad scramble to find a profitable digital strategy — at first glance the German publishing industry bears a remarkable resemblance to the U.S. Twilight and The Hunger Games (or The Tributes of Panem, as the series is called in German) are the blockbusters they are in the States. But that in itself is telling: the majority of German publishers’ young adult lists are translations. And the differences don’t stop there.

As a lucky participant in the German Book Office Editors’ Trip this year, I had the opportunity to visit with publishers, editors, rights agents, literary agents and a journalist to discuss the children’s book market in Germany. On the week-long trip, traveling to both Hamburg and Frankfurt, six other U.S. editors and I had a unique chance to visit the country that invented the printing press.

On our first stop, we met with Brigitte Briese, former director of the children’s book review magazine Bulletin Jugend & Literatur, at the Literaturhaus in Hamburg for a brief overview: in 2010 book sales were up 4 percent from the previous year (more recent figures were not yet available). Children’s books represent the second-largest segment of the market (15%), with adult fiction in the top slot (33%). And e-books accounted for 5.4 percent of all sales, with no significant increase expected in 2011.

Oh, and all books sold in Germany have a fixed retail price. I’m pretty sure I had this information rolling around in my head somewhere, but it wasn’t until this trip that I understood the impact it has. In general, hardcover books are sold for about 20 euros and trade paper for 10 euros. In a store or online, at a chain or an independent — it’s the same price everywhere. So while there is a general decline in the number of bookstore due to increased online sales, these are convenience-based sales only. This also means there are more independent bookstores, although chain stores like Thalia do enjoy higher discounts from publishers.

German e-books tend to be priced high, so there’s no financial motivation for consumers to move from reading physical books to e-books. Coupled with the German cultural preference for hardcover books, and you start to see why the proliferation of e-readers isn’t expected to transform the market in Germany the way it has in the U.S. At least not as quickly.

With these marked differences, it’s not correct — or fair — to say the German book industry is “behind” the U.S., although I heard German editors and publishers themselves make various estimates that the country is two years to five years behind. It should be noted that while the Kindle has been available in Germany since 2009, the Kindle Germany Store only launched in April 2011, and Kindle Fire won’t be out until later this year. Apple’s iPad is the most popular e-reader in Germany right now, followed by Kindle and then Oyo (an e-reader launched by Thalia, Germany’s largest chain bookstore).

We met with a few publishers who seemed energized by the potential of the digital market. Carlsen Verlag has invested in the app market with more than 50 apps for children available, and they are partnering with British company Nosy Crow. Verlagsgruppe Oetinger is producing interactive multimedia books, have launched their own open-platform app store called Tiger, and have developed an education platform called Onilo, a subscription-based website with “board stories,” animated books designed to work on classroom whiteboards. Oetinger plans to present this program at Frankfurt and announce a U.S. partner. These were notable exceptions, though. Many of the German publishers we met with appear to be taking a “wait and see” approach. I even heard a one rep say, “We’ll wait and see what the big guys do.”

The looming questions about the digital shift, the slow decline of bookstores and a recent survey finding that 20 percent of responders never read books and that reading is the 10th most popular pastime in Germany (after watching TV, being social, listening to music and eating out), have resulted in some noticeable pessimism about the future of the book industry in Germany. But I also experienced a sense of renewed determination to publish and market good books — books that will foster a love of reading in children. In fact many publishers mentioned they are shifting their focus away from YA and toward children’s books, in an effort to build a community of readers who will grow up to read YA and adult fiction.

It’s somewhat reassuring actually that the country that invented the printed book also has doubts and worries about its future. And it was inspiring to see innovative companies developing these amazing digital properties for an e-market that’s not quite there, rather than clinging to tradition. Just as in the U.S., the next few years will be industry-altering for German publishers, and I’m eager to see just what form “the book” will take.

The participants on the trip, pictured above, were: