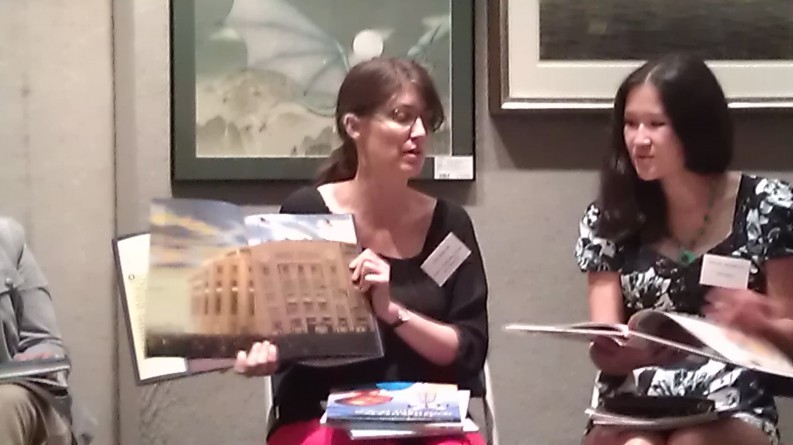 “Storytellers, no matter where we’re from, have things in common.” The Kazakhstan delegates included: Yevgeniya Kan, a freelance illustrator and author of a self-published collection of fairy tales. Kan is also the creator of Irby the snow leopard, which was chosen as the official mascot for the seventh Asian Olympic Games held in the Kazakh capital, Astana, and its most populous city, Almaty, in 2011. Helena Korolek, who worked at Aruna publishing house as an artist and creative director from 2001 to 2012. In 2001, she published her first book of fairy tales for children, Tales from the Forest, which she also illustrated, and in 2007, she authored Helen Eve, a four‑part fantasy series for teens. Zara Yesenaman, an independent publisher, author, musician and journalist. Yesenaman won “Shabyt,” an award for artistic youth in literature, for her bestselling novel Hardcore, which examines the problem of teens and drugs in Kazakhstan. And Dameli Sabitayeva, a designer and illustrator working for a large publisher.

National WNBA President Valerie Tomaselli, of MTM Publishing, and WNBA New York Chapter President Professor Jane Kinney‑Denning opened with remarks describing the Women’s National Book Association. A book trade organization with eleven chapters nationwide, it was founded in New York City in 1917 by women booksellers who had been excluded from the all-male Booksellers’ League. Kinney-Denning elaborated on how the meeting falls firmly into the tradition: “This is a perfect example of what we do, bringing together women who are working in publishing.”

She told the rapt delegates about the hundred-year-long history of the position of children’s librarian at the New York Public Library — the first was a woman named Anne Caroll Moore (1871–1961). Kazakh author Yesenaman recalled her first encounter with a librarian and her puzzlement as to why the woman asked her what books she was interested in. “That was when I realized how important librarians are. You give a new life to people when they read.”

Nancy Mercado, Editor at Roaring Brook Press (Macmillan) spoke about how she favors books with a visual component even for older readers, while Lily Malcom, associate publisher and executive art director at Dial Books for Young Readers, focused on how design and editorial processes for all kinds of children’s and YA books are very collaborative. Leanna Renee Hieber, author of the YA novel Darker Still: A Novel of Magic Most Foul, spoke movingly of the international community of writers, saying that “storytellers, no matter where we’re from, have things in common.” Next it was time for the delegates from Kazakhstan to speak. After showing the group a selection of the wonderfully surreal illustrations from her book Tales from the Forest, Korolek commented on the state of book publishing in Kazakhstan:

“Literature in Kazakhstan is rapidly developing; new directions and trends are appearing, as well as graphic novels, yet the attention remains on maintaining national traditions and historical books. In children’s literature, fairy tales, stories and novels, the main themes continue to be showing love towards dear ones, while preaching for goodness and fairness. At the same time the current literature also shows the cruel side of life and  psychologically prepares the child to realize that good does not always win. The main task for the Kazakhstan publishers today is to develop more widespread usage of the native Kazakh language. Over the past few years many foreign books have been translated, through which the children of Kazakhstan get to know the cultures of other peoples of the world. And, of course, publishers are making sure that the books are available to each child.”

While Yeseneman described the state of children’s publishing in Kazakhstan:

“Our children’s literature market is very diverse. As in any country, children like bedtime stories with good pictures. Folktales, ancient myths and epics are popular as a component part of our ancient nomadic culture.”

“It is possible that the genre of graphic novels is not as popular because, from childhood on, more attention is devoted to the text than to illustrations. In my opinion, the balance between text and illustration is very important; books develop our imagination and grow our personality from page to page.”

What was clear to all the attendees at the end of the meeting was that, despite the differences in language and culture between NYC and Kazakhstan, what united them all was their love of great books. As Leanne Renee Hieber proclaimed, “That’s the great thing about classic literature. It crosses boundaries.”