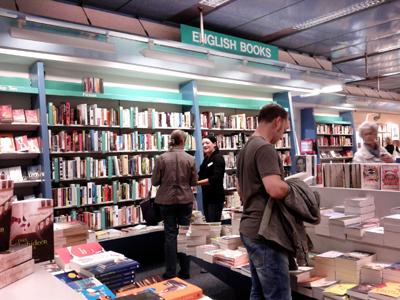 The digital age has turned everyone into “global customers.” As an American traveling abroad, one of my great pleasures was to steal a few moments to pop into a favorite English-language bookstore and browse, breathing in the familiar. Though the prices for books were often significantly higher than at home, I could nevertheless find a few moments of comfort with my native language, of the authors I’d grown to love, of the ambiance. And you could reliably find such stores in most major and mid-sized European cities, from Berlin to Milan to Lisbon, as well as throughout Latin America, Asia, the Middle East, and Africa.

Paris was home to two of the best, Shakespeare & Co. — as much a tourist attraction as a bookstore — and the exemplary Village Voice, a serious store in all respects. But now comes the news The Village Voice is closing, with owner Odile Hellier noting that the digital age has turned everyone into “global customers” who, with an appropriate credit card, can easily buy books from abroad.

So, is this the end of the era, when the romance of meeting an attractive like-minded traveler on their Grand Tour tracing their finger over a small shelf of dusty William Gaddis and Harold Brodkey books…is just a memory?

Perhaps not. Some stores, such The American Book Center in Amsterdam continue to thrive, and others, like Another Country in Berlin and Beijing’s The Bookworm are finding success by serving as de-facto English-language libraries, as much as bookstores.