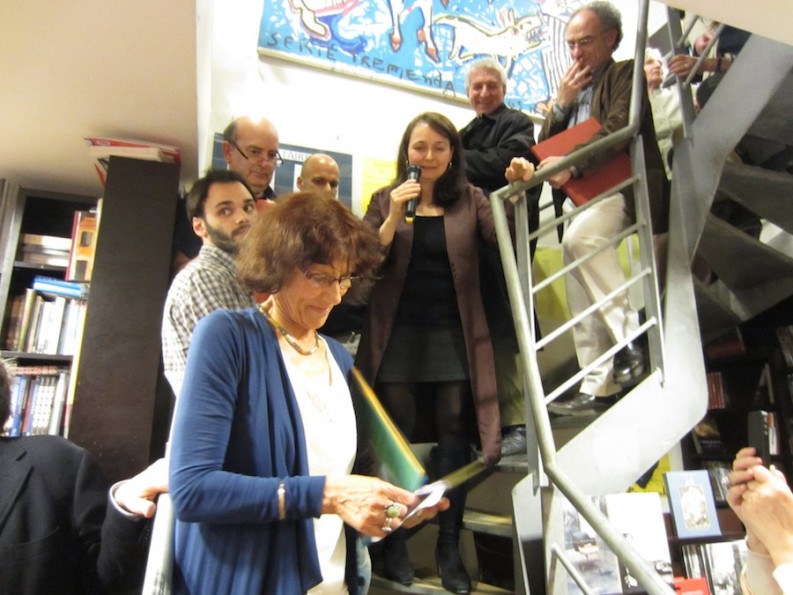 “It’s a miracle we lasted this long,” says Odile Hellier.

Parisians and visitors alike were shocked and disconsolate when they heard last month that the independent, English-language Village Voice bookshop would be closing definitively at the end of July. Odile Hellier and admirers at the store's recent closing party

Founder and owner Odile Hellier, along with a faithful team, has kept her shelves stocked with the best that publishers produce for three decades, running impressive literary events over the years with authors such as Raymond Carver, Edmund White, Don DeLillo, Mavis Gallant, or David Sedaris. Moreover Hellier succeeded in creating a veritable community of book lovers.

But the deregulation of book prices in the Anglo-Saxon publishing world, the rise of Amazon, and more recently the advent of e-books, took a terrible financial toll on the bookshop and had Hellier battling for years. The Village Voice’s swan song began two years ago — Hellier spoke to people far and wide trying to find a financial solution, but no one stepped up to the plate. Now that she has finally made the decision to close the bookstore, customers are having a very hard time “letting us go,” she says.

“It’s a difficult enough decision to manage, but I realize we are something like an imaginary reference point inscribed in their mental map. Because things change so rapidly today, something that has been around for 30 years seems like it will be there forever.

“People don’t understand the details,” Hellier added, with emotion. “They feel I am abandoning them.”

At a recent farewell party at the bookshop, customers, many of whom are Paris-based writers, editors and publishers, packed into the two floors of the bookshop and spilled out into the street. Speeches were made, and gifts were given, but as a sign of the times, one author who has participated in literary events at the bookstore was overheard saying to friends that they should look for his latest book “on Amazon.”

Hellier describes a growing trend of “showroomers” — people who browse in the shop and pull out their iPhones and order books from Amazon, copying the titles from the volumes on the shelves.

From her tidy, windowless office in the back of the shop Hellier takes a call from Richard Ford who has just heard the news. She explains to him that his own French publisher told her that closing the shop was inevitable. “When publishers tell you that, you know it’s reality. And reality is stronger than desire.”

Although independent bookshops in France are faring much better than in other countries, The Village Voice as an English-language bookshop could not benefit from the subsidies pumped into the French book business by the state and publishers.

“The writing was really on the wall,” said Hellier. “We have been observing the reality of the Anglophone book business with the discounting, the online digital revolution and the social status of the Apple products which are all part of a societal revolution. It’s a miracle we lasted this long, but ten years ago people weren’t yet global consumers.”

There are other factors besides those mentioned that added to The Village Voice’s expenses. Unlike several other English-language bookshops in Paris, which often rely on volunteers or where the owner works solo, Hellier has three professional booksellers, all of whom she pays a salary to, and in France, labor does not come cheaply. Part of what made The Village Voice so beloved, was the depth of knowledge of its booksellers and their dedication to finding books for clients. “It was all about service,” said Hellier. “We would look for very difficult books for customers from all over the world. But a bookseller’s service doesn’t pay any more. We are not psychoanalysts or lawyers.”

Furthermore the bookshop’s very expensive Saint Germain des Prés neighborhood, while still an area where many publishers are located, is no longer a cultural magnet. Hellier said that if The Village Voice were to be reincarnated, it would have to relocate to another area of Paris that is more attractive to book browsers and sellers, and less overrun by fashionable boutiques and bars.

As it became more and more difficult to make ends meet, Hellier began to ask herself some serious questions. “We fought [going under] at a personal expense. It was like entering a monastic life, it takes total dedication, spending so many hours at the job, reading at night, looking for good literature…it takes time to go for the best and I would not want to go for less than the best. I don’t regret any minute of it but I began to ask myself what am I doing with my time? It has to be a tandem. The business can only exist if you are two dancing the tango—the person who sells and the person who wants to buy the product.”

Hellier was not opposed to taking her business in different directions and for 18 months she explored the possibility of selling e-books via Google, but the complicated interface needed–as well as the investment — didn’t seem worth it. Besides, “one of the joys of a bookseller is seeing the cartons of books arrive. Immediately you get a fever and feel the need to read.”

She is also very pragmatic about the need for booksellers to adapt to “new cultural concepts more attractive to people’s current expectations.”  Hellier doesn’t see a renewal of generations of readers, and acknowledges that “a revolution has taken place and the trend is not going to be reversed just yet.”

What she does see as an exciting possibility for booksellers is to link their trade with other events. “You have to have an ensemble, a café, an auditorium where you can show films, have lectures, a multi-event type of place with multimedia. I see something in movement, bookshelves are static…”

For the moment, though, Hellier, who will soon turn 70, will take a break and “get some distance.” She will work on The Village Voice’s impressive archives and assures friends and customers that she will not be leaving the world of literature. In a letter to the bookshop’s friends, Hellier leaves the door wide open, quoting from T.S. Eliot’s Four Quartets: “as an invitation to the literary mind to imagine the possibility of a relay to The Village Voice Bookshop, a new initiative that will necessarily differ from the original model yet develop in the continuity of its spirit: ‘To make an end is to make a beginning.’ Any such initiative would have our moral support and benefit from our expertise and experience.”

The bookshop will close July 31st.